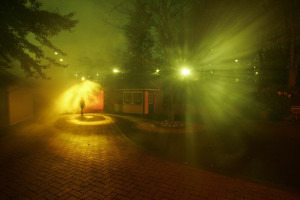 By: Marle Ebbert | For The Duquesne Duke

It’s that time of year again; the time of year for caramel apples, pumpkin carving, and dressing up for All Hallow’s Eve.

But for those hard-core Halloween goers who seek the thrilling and frightening side of the holiday, check out a few of the Haunted Houses in and around Pittsburgh.

For $20, you can experience six different thrills in one night: Dead Lift, Damnation, South Valley Hospital, The Family Unearthed, The Maze, and Brine Slaughterhouse.

Walk your way through the Acres family estate in Dead Life or witness the eternally condemned souls trapped within the manor walls in Damnation.

The South Valley Hospital revolves around the idea of tortured patients lurking about an abandoned hospital whereas The Family depicts a family surviving a nuclear attack and anyone who enters is on the menu.

Navigate your way through The Maze which is 7,500 square feet or the Brine Slaughterhouse which turned into a processing plant for human flesh.

On Wednesday nights, admission is $10 with your college ID but on Friday, October 18th, the Duquesne Council and St. Martin Resident Assitants will be hosting a trip to the haunted house.

The cost of the upcoming trip is $5. Limited tickets will be available at the St. Martin’s front hall desk.

Only cash is accepted at the ticket booth but the facility provides an ATM. Hundred Acres Manor suggests to purchase tickets online prior to attending the haunted house.

During the fall season, the traditional classic amusement park is revamped into a haunted house like no other.

“If you walk through each haunted house, you will see each one is very different,” Filicko said.

With all the various options at the park, there is no way you won’t be scared.

“Simply put we want to scare you…No matter what you’re afraid of, you will find something at Phantom Fright Nights that scares you,” Filicko said.

If creepy characters touching you scares you, there is nothing to worry about. Actors are not allowed to touch the guests and vice versa, according to Filiko

Rides, like the Phantom’s Revenge, Noah’s Ark and Exterminator, will be in operation.

General admission is $29.99 at the gate. Purchasing tickets online or at Giant Eagle locations will save you $3.

On Sunday, Oct. 13, college students may enter the park for half price with the presentation of their college ID.

For a more traditional haunted house that has been in the business for a while, there’s ScareHouse.

This facility has been in business for 25 years and has been voted “one of the scariest haunted houses in the world,” by USA Today and “One of America’s Best Haunted House Attractions” by Yahoo! Network.

According to Margee Kerr, sociologist and scare specialist, the woman behind the scaring schematics: Forsaken is the more traditional haunted house, Pittsburgh Zombies portrays zombies terrorizing the city, Creepo’s

Christmas depicts Creepo the Clown getting his revenge when he learns Christmas took over Halloween, and The Basement is full of many frightening characters waiting to attack those brave enough to venture below the ScareHouse.

The price for The Basement is $29.99 for one person and $49.99 for two people. Victims must sign a waiver for this haunt because the actors are allowed to touch and restrain anyone who enters.

“The intended experience is for people to have a good time. We want people to have fun.. get their adrenaline running and then high five at the end,” Kerr said.

General Admission is $19.99 and tickets are sold for half hour entry times.

It is highly recommended to purchase online. Limited tickets are available at the gate and customers have a longer wait time

The ScareHouse is open every Friday and Saturday from 7 p.m. to midnight through November 2nd. During the month of October, they are open Thursdays and Sundays from 7pm to 10pm. The Scarehouse is open on Halloween Night.

There is no parking at the ScareHouse and patrons are asked to park at the Pittsburgh Zoo and Aquarium, where a shuttle runs to the haunted house.

‘It’s Halloween; this is what we do’ : Jekyll & Hyde bartender goes one on one with The Duke

October 31, 2013 The Duquesne Duke Features Comments Off on ‘It’s Halloween; this is what we do’ : Jekyll & Hyde bartender goes one on one with The Duke

By: Zach Brendza | Features Editor Dave Cordell, 31 of Brighton Heights has been bartending at Jekyll and Hyde in South Side for nine years. Now manager, Cordell has experienced nine Halloweens at the Halloween-themed […]