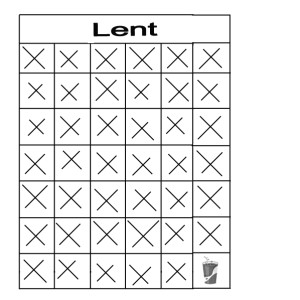 For forty day you chose water over soda. You took the stairs instead of the elevator. You gave up Facebook or that other social media site you spend too much time on.

But now that Lent is over, it feels good to log back in, or ride the elevator two floors in Towers, doesn’t it? The real question is why do we choose to give up the strangely specific things that we enjoy so much?

In the earlier days of Catholicism, Lent was practiced more strictly than our modern society’s attempts. According to Jotham Parsons, an associate history professor who teaches History of Christianity at Duquesne, Christians would abstain from sex, meat and wine throughout the 40 days as far back as the 6th century A.D. In the cases of monks who sacrificed these things regularly, Lent was a time to give up even more, often giving up sleep and fasting more than they already do.

“We do it for the feeling of self-discipline and self-mastery,” Parsons said. “It’s a form of participation in Christ’s suffering and helps us work toward salvation.”

But why 40? When we look toward the Bible we can see that the number 40 has always had a spiritual significance in regards to preparation.

In more recent times studies have begun to show that we sacrifice things for Lent for more than just the spiritual benefits.

Duquesne students in particular have looked toward bad habits and guilty pleasures to abstain from this year.

“I gave up pop for lent,” said Liz Klein, a senior communication studies major. “I drink too much of it and it’s unhealthy for me.”

Rachel Johnson, a sophomore psychology major, isn’t even catholic and decided to sacrifice for lent.

“I gave up swearing and pasta,” she said. “It’s a bad habit of mine and I was hoping the 40 days would help me nip it in the bud for good.”

Although she did manage to abstain from pasta, Johnson admits that the swearing is still a work in progress.

According to a recent study published in the journal Social Psychological and Personality Science, researchers Jordi Quoidbach and Elizabeth studied the behaviors of how people feel when they give up something for an extend period of time. The study asked participants to eat a piece of chocolate and document their feelings. The group was then divided into three groups.

The first group was instructed to eat as much chocolate as they wanted throughout the following week. The second group was told to abstain from the savory treat for the same amount of time. And lastly, the third group was left with no instructions at all. Once the week was completed all three groups met again and ate another piece of chocolate while recording their feelings.

The results of the experiment proved that those who abstained from eating the chocolate were significantly happier than both those who ate it throughout the week. By simply giving something up for a period of time and then coming back to it, the participants were able to have a greater appreciation for the smaller joys in life.

Whether it’s chocolate or too much TV everyone has something they indulge in a little too much for their own good.

Lent is a time of repentance for Catholics across the world but it just goes to show that it can more than that too. It can be and incentive to be a better, happier person regardless of religious back ground.

February 1, 2018 The Duquesne Duke Opinions Comments Off on Campus dining halls in need of culinary upgrade

02/01/2018 By Ollie Gratzinger | Features Editor  They say you are what you eat. If that’s the case, how many of us here on the Bluff are some variation of a Towers’ grilled cheese? Well, […]

By Zach Landau | A&E Editor I cannot remember the last time I felt so conflicted about a film. It Comes at Night is a curious movie that should tick every box for me. At […]

By Alison Caracciolo | Staff Columnist What’s scarier than zombies, ghosts and ghouls combined? How about being a broke college kid during Halloween? With the spooky holiday right around the corner, the average college student […]