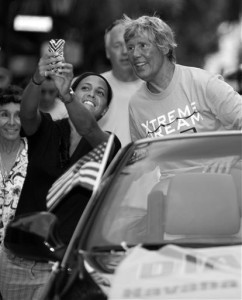 One hundred ten miles from Pittsburgh will get you 20 miles away from Cleveland, 350 miles from Chicago and 2,300 miles away from Los Angeles. It takes roughly two hours to drive, three hours on a bus and 41 hours to walk. Or if you’re Diana Nyad, it will take you 52 hours to swim (in shark infested waters, of course).

Okay, she didn’t swim from Pittsburgh to Cleveland, she swam from Cuba to the coast of Florida, completing the daunting task on her fifth try in a journey that took her 35 years to complete. More impressive is that she finished the task at the age of 64. Even more impressive, she was the first person to finish the trek without a cage to protect her from sharks.

When Nyad first attempted the trek she was 28 years old and had a shark cage around her, but gave up after 76 miles. Later in her fourth attempt, she was violently attacked by jellyfish and had to call off the excursion after sustaining injuries that have killed some in the past.
Now, in her fifth, and according to Nyad what was going to be her final attempt no matter the outcome, she crossed the “finish line” and made a name for herself in the process. She became a legend, even if it is only until the next person comes along and completes the trek.

You may be asking yourself, “What relevance does this story have to my everyday life? What should I take away from her trek?” Besides the fact that a 64-year-old can complete that 110-mile swim and that you need to up your fitness routine, you should learn to persevere.

Yes, it’s overstated and it’s overly cliché, but if there’s anything you can take away from not only Nyad’s trek, but also the treks of Amelia Earhart, Christopher Columbus and Lewis and Clark, it’s that you shouldn’t give up. Each of these people worked hard to do something truly amazing, and because of that we remember who they are. They did something so incredible and tried so hard to achieve their goals that their names will live on forever.

Nyad’s adventures are a testament to what perseverance can truly help one achieve. Partway into her swim on Saturday, Nyad was stung by a jellyfish and was in pain and suffering for 13 hours. She was struggling to breathe the remainder of the voyage and in press interviews could barely speak. Her face was swollen, her body was aching and yet she didn’t care. She was elated. She had completed something she had been trying to do for 35 years.

Yes, you’re in college and nowhere near attempting a 35 year long goal, but start small.

Find your dream job, join a student club that you think would be cool, go to the gym three times a week.

Do what will help you smile, even if after being stung by a jellyfish and enduring a 52-hour swim.

It means that her life-long goal was achieved. Find your 110 miles, find your goal and remember, you might be stung by jellyfish, but in the words of Dory, you can “just keep swimming.”

Addie Smith is a junior Print Journalism and Politce Science major and can be reached at smitha11@duq.edu.

Streets on Carson keeps it hot in the streets

April 14, 2016 The Duquesne Duke Features Comments Off on Streets on Carson keeps it hot in the streets

Saving lives, one shot at a time

April 8, 2021 The Duquesne Duke News Comments Off on Saving lives, one shot at a time

Elizabeth Sharp | Staff Writer 04/08/2021   As COVID-19 vaccination rollout continues across the country, some Duquesne students have already been able to receive the vaccine.  Duquesne has recently begun distributing vaccines on campus, and […]

By Joey Mueser | Staff Writer Sounds From a Room, more commonly known as SoFar or SoFar Sounds, is a modern way to get to listen to artists in a very intimate and social setting. […]