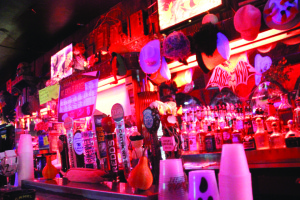 Dave Cordell, 31 of Brighton Heights has been bartending at Jekyll and Hyde in South Side for nine years. Now manager, Cordell has experienced nine Halloweens at the Halloween-themed bar.
“It’s Halloween; this is what we do,” Cordell said.

Q: What’s Jekyll and Hyde like on Halloween?
A: Everyone is pretty much dressed up. The bar is full. We have a capacity of 110 and will have a line of anywhere from 40 to 100 people outside.

Q: What are some of the best costumes you’ve seen?
A: I’ve done some pretty good ones myself, but I’m not allowed to win the costume contest anymore. There was a really good Avatar one year. There used to be a guy who came in and wore a Scarecrow costume. He would wear painters’ stilts. He literally couldn’t walk around in here. Somebody would walk by and he would put his hand on them … Some of the costumes I’ve done: David Hasselholf, Larry Bryd, Hulk Hogan, The Incredible Hulk, I was body painted like the Incredible Hulk. I don’t want to tell you some of the ones that might offend people (laughs). There’s been so many costumes in here. In nine Halloweens, I’ve seen over a 100 costumes. I need to wear a GoPro so I can remember it.

Q: Any memorable stories from Halloween?
A: I like box costumes. I tend to notice box costumes. They’re not fun to wear. One guy made a Jeffrey Dahmer refrigerator. The box was built like his head was in the door of the refrigerator. It was slick. The guy [who wore it] actually kind of looks like Jeffery Dahmer.

Q: Any memorable Halloweens for you?
A: I would have to say the first Halloween was the significant one. It was when I found out how nutty and crazy most people are about Halloween. From there, it escalated. I’ve tried to keep up on all my costumes, but it’s tough to keep doing them.

Q: Does the Halloween theme of the bar take away from the holiday itself?
A: No it’s the complete opposite. We wish it was Halloween every night. Every Friday the 13th there’s a party. Hallway to Halloween, Halloween in July. Nightmare on Elm Street parties. Different type of bar crawls.

Q: Do you like Halloween?
A: I love Halloween for sure. For me, it’s more of a challenge to have the best costume. You know lately I’ve been busier and busier. I don’t like to reuse a costume and I don’t like to buy a costume from a store. The only costume I’ll ever repeat is the first costume I ever wore here, my Larry Byrd costume. I got little white basketball shorts on, an actual Larry Bryd Jersey and a blonde wig, with green Chuck Taylors with some high knee socks, it’s pretty good.

Q: How many costumes have you done for the bar?
A: It would have to be 50.

Q: How do you think of costumes?
A: It depends on the situation. Typically I rely on current events. I did a Chilean miner once, it was right when they got saved. I hopped online and got a Chile soccer shirt, a Chilean flag and a miner’s cap and rubbed some dirt on myself. This year was tough because I was growing my beard. But doing good costumes with a beard is pretty difficult. I’m getting ready for Abe Lincoln. I’m putting all my eggs in one basket this year.

September 10, 2015 The Duquesne Duke News Comments Off on WWII ship with ties to Pittsburgh wows visitors

We’re all stories in the end: editor-in-chief bids adieu

March 19, 2020 The Duquesne Duke Opinions Comments Off on We’re all stories in the end: editor-in-chief bids adieu

03/19/2020 By Ollie Gratzinger | Editor-in-chief  I’ve found that sometimes — rarely, but sometimes — life falls into place in such a way that makes me wonder if it’s all been predetermined. Sometimes, people and […]