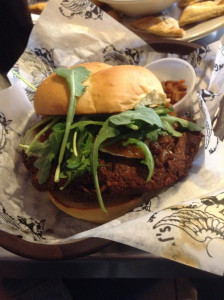 We all know that guy with a muscular right arm, but a left that is unproportional.

Winghart’s reminds me of that cliché, a restaurant that spends so much energy making everything around their entrees great, but the entrees, themselves are not.

When I walked into the Market Square location (they also have a South Side restaurant), comfortable was the word that came to mind. The restaurant feels very casual. There are two bars, a jukebox and winged burgers painted on the walls. The space is rather small.

But surprisingly my vegetarian friend and I had plenty of room thanks to intelligently placed tables and chairs in the upstairs. The music was not something I would listen to, but it was fine and at a level that didn’t bother me. The view from the balcony is tremendous and had this meal been during warmer weather we surely would have enjoyed the open air.

We were waited on by three different people, thanks to shift changes and smoke breaks, but were waited on quickly. We received our Cokes fast and had ample time to survey the large menu.

We started off with a spinach and artichoke dip with pita bread that was delicious. The dip had the appearance and texture of a puree and was very easy to spoon onto the warm pita. The flavors all mixed well.

For my entrée I ordered the Denny Double Blue, which was basically a plain burger with dry blue cheese and blue cheese dressing. Many of the other options come with toppings that are just a little bit too elegant, so I went with something simpler. All the effort was expended on everything but the burger, the appetizer, dessert and some of the more luxurious topping were well executed, but my burger, which should have been the focal point of the meal, wasn’t. I asked for medium and got almost well done. The lettuce wasn’t fresh and, worst of all, the bun was old. I actually enjoyed the double bleu cheese idea and it really works if you like blue cheese, but if not then this is definitely not the burger for you.

My friend got a Shipwreck burger, which comes with Brie cheese, caramelized onions with bacon, arugula, and white truffle aioli, a delicious spread made with truffle oil and eggs. Of course he veggified it with a falafel patty with bacon on the side, for me. The components worked well, but the patty was not up to par, it was dry and left a lot to be desired. His bun was also less than stellar.

To cap off the meal I ordered a hippy cake, Winghart’s version of a funnel cake. This was fried to perfection and was a great way to cap an under whelming meal. 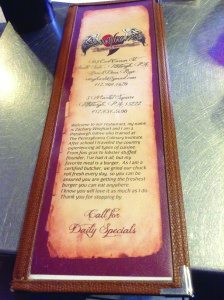 The bill for both our meals was $45, which is reasonable considering everything we ordered. My burger was only $9 and everything else was priced about as reasonably.

A lot of the things surrounding the burger were done really well. I just wish Winghart’s would curl with their left arm every once in a while because an amazing burger could have taken this restaurant over the top.

Brandon Addeo | News Editor Does the use of armed aerial drones for targeted killings of suspected terrorists comply with law and ethics? That was the topic of discussion at “Law, Ethics and the New […]

By Ollie Gratzinger | Staff Columnist It’s that time of year again. Taco Tuesdays at Options are becoming less and less crowded. The lines at The Market are shorter than they were weeks ago. Students […]