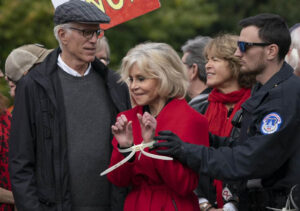 Fridays are arguably the best day of the week. Everyone longs for the weekend and when it finally comes, it’s time to celebrate -unless you’re Jane Fonda in which case Fridays are for getting arrested on Capitol Hill.

Every Friday until January, Fonda, 81, has promised to peacefully protest on Capitol Hill to urge politicians to address climate change. She’s calling these demonstrations Fire Drill Fridays,which is pretty reminiscent of Greta Thunberg’s Fridays For Future.

Last week, Fonda brought along Ted Danson, 71, to the latest protest. It was pretty entertaining scrolling through Twitter and seeing Fonda and Danson smiling ear-to-ear with their hands in zip-tie handcuffs. One tweet read, “Me and my wife getting escorted out of a Chili’s happy hour,” with two photos of Fonda and Danson being taken away from the protest. Honestly, it was all very amusing. Fridays just got a lot more exciting if it means new content of Jane Fonda and company posing for pictures while getting arrested.

While Fonda’s main goal is to get politicians to act on climate change, she’s also increasing public awareness of the issue. Fire Drill Fridays are getting a lot of acknowledgement and like I said before, it’s all over social media. People of older generations, who are more familiar with Fonda’s career but not as familiar with climate change, will see what she is doing, and who knows? Maybe they’ll educate themselves more on the latter.

And of course, students and anyone on social media will see what Fonda is up to, and could definitely be inspired to take part in their own Fire Drill Fridays protests. Greta Thunberg has certainly had influence over public awareness of climate change, so why can’t Jane Fonda? Any awareness of the climate change issue is good. The earth is dying and we need to act on it.

As much as I’ve enjoyed the last few Fire Drill Fridays and look forward to the upcoming ones, it’s important to note some potential flaws in the plan. First, what if instead of getting arrested and needing to pay bail, what if money was spent instead on projects or groups focused on ending climate change? Perhaps Fonda is donating to such causes, but that’s not what is getting press. That’s not to say that every time a celebrity donates to charity, it needs to be made public, but obviously Fonda wants people to know what she’s up to, and there hasn’t been much word going around about specific groups or projects she’s supporting.

Another issue that could be raised with Fonda’s intentional arrests is that it’s an exercise of privilege that only a certain group of people have. Not many people can necessarily afford to be arrested every Friday.

But what is a little more prevalent than just that, these arrests prove a flaw in the criminal justice system. For the rest of the year, Fonda is going to get arrested and then become free a few hours later when she pays her way out. But what about people who get arrested for minor crimes, like marijuana use, and will sit in jail for a few years because they can’t just bail themselves out?

This complaint isn’t against Fonda, it’s just a note about the unfairness of the system. People commit small crimes all the time, and there needs to be a fix to a system that actively puts marginalized people in jail, instead of getting them the help they need. Fonda’s protests just put more emphasis on this issue, which is obviously separate from climate change, but an issue that still needs addressed and fixed.

Despite the fact that there may be some gripes with Fonda’s protests, personally I’m here for it. It’s providing great internet content while also increasing awareness of climate change for people of all generations. The dying earth is arguably the biggest issue our generation will face, so if Jane Fonda, at 81 years old, wants to get arrested each week because of it, well then… go off, sis.