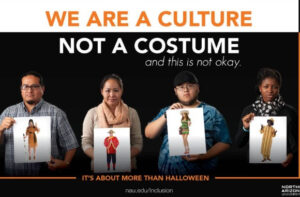 No matter what age you are, some aspects of Halloween are bound to give you a scare. Whether it be the terrifying masks, the gory decorations or the classic movie marathons, Halloween is the time of year that makes everyone a little uneasy. For me, however, my fear is not in the blood or the monsters. My fear is in those who wear costumes that are clearly culturally inappropriate.

Although the term “cultural appropriation” has been a common idea within the past few years during the Halloween season, some may still be unfamiliar with its meaning. Cultural appropriation by definition is “the adoption or co-opting, usually without acknowledgment, of cultural identity markers associated with or originating in minority communities by people or communities with a relatively privileged status.”

In shorter terms, cultural appropriation is representing a culture or group out of ignorance of the true meaning behind it. This is continuously portrayed through costumes such as “Mexican man,” “gypsy,” “geisha” or any costume involving blackface. Most people dress up in these outfits without even realizing their wrongdoing. Although those participating in these costumes may not be aware of their meaning, we cannot keep using ignorance as an excuse to wear costumes that fail to recognize significant historical events or experiences.

During this time last year, CNN political analyst Kirsten Powers dismissed concerns of white people who object to being labeled racist over Halloween costumes, tweeting, “Dear white people who are upset that you can’t dress up as another race or culture for Halloween: your feelings don’t matter.”

In support of Powers’ words, I believe that people who do not see or cannot recognize the evident racism in their costumes have a special kind of privilege. They are privileged to never have experienced the misfortune of any form of discrimination against their culture.

Although there are certain costumes that have clear usage of cultural appropriation, some have been a little controversial or even confusing for people who want to wear them. One of the most relevant stories in connection with cultural appropriation occurred in 2017 during the rise of the popular Disney movie, Moana. The appropriateness of kids dressing up as Moana was a controversial discussion. Auli’i Cravalho, the voice of the popular character, spoke out about the topic.

“I think it’s absolutely appropriate. It’s done in the spirit of love and for Disney and for the little ones who just want to dress up as their favorite heroine, I’m all for it. Parents can dress up as Moana, too,” she said.

The U.S. is a nation known for our wide variety of cultures and differences. We grow up learning how to accept our differences and see the beauty in them. Cultural food, art and music are spread out of love and passion for their people throughout the entirety of the year. Adopting a culture, cuisine or tradition is not cultural appropriation. However, using a culture as a holiday costume out of ignorance is. It is about time we cut the ignorance of Halloween completely out of the season.

Plus, there are so many great Halloween costumes that are both creative, and not racist or culturally inappropriate! We should continue to love the history of our nation’s cultures, not disrespect them for the simplicity of a costume.