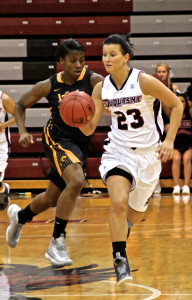 By Pat Higgins | The Duquesne Duke

It was a story of two halves for the Dukes in their first round matchup against Virginia Commonwealth University in the Atlantic-10 Women’s Championship.

After a rocky start at the Hagan Arena in Philadelphia on Friday afternoon, the Dukes maintained their composure while playing from behind for most of the first half. By figuring out a way to wear down the Rams on defense in the second half and creating shots against an intense half court press, the Dukes were able to notch a 64-58 victory over the tournament’s 12-seed to advance to the quarterfinals against the host Hawks tomorrow at 2:30 p.m.

Orsi Szeci led the team with 15 points in 24 minutes, while April Robinson and Wumi Agunbiade combined for 25 for the Dukes.  Jocelyn Floyd added another seven steals to her NCAA-leading total, running her tally to 140 on the season.

The Red and Blue stuck to their game plan in the second half by playing with the same defensive intensity.  With the Rams worn down, holes started opening and shots started falling.

The Dukes beat VCU by 22 points on the road in late January, but coach Suzie McConnell-Serio knew this was going to be a tough matchup at a neutral site in tournament play.

“We knew coming in that this was going to be a hard fought game and that VCU was so dangerous,” she said. “We came out in the second half and stepped it up defensively. At this time of year, you talk about being able to make plays, and that’s what happened down the stretch. We were just able to make a few more plays.”

VCU coach Marlene Stollings gave all the credit to the Dukes and their defense, specifically in the second half.

“They’re an NCAA tournament team in my opinion,” she said.  “They’re gonna press you for 40 minutes and we knew that coming in.  They did a good job of that. They didn’t change their defense in the second half.  That’s their style, and they’re very good at it and they’re very committed to it.”

March has arrived and madness will ensue. McConnell-Serio knows these games can go either way even when one team is favored on paper.  With the close win over a VCU team that was 4-10 in conference play this season, the Dukes advance to play Saint Joe’s tomorrow afternoon.  The cross-state rivals will face off for the first time since a chippy overtime thriller in mid-February at the A.J. Palumbo Center.

“St. Joe’s is so talented, they’re very good,” McConnell-Serio said. “Right now everyone says it’s survive and advance, but that’s exactly what this conference tournament is. This is getting a shot at another team that has beaten you earlier in the year and I think our team realizes the significance of this game and being able to get to the next day.”

The Lady Dukes will face the Lady Hawks Saturday at 2:30 p.m. in Philadelphia for round two of the Women’s A-10 Championship.

02/01/2018 By Rachel Pierce | Staff Writer The Catholic Church is going out of business. The steep decline in attendance has left leaders desperate to pull more members, particularly amongst millennials. However, Pope Francis’s comments […]

By Gigi Jeddi | The Duquesne Duke A three-day conference on climate change hosted by Duquesne last week attracted dozens of speakers and attendees, and generated approximately 70 metric tons of carbon emissions due travel, […]

Brandon Addeo | The Duquesne Duke As Duquesne’s Presidential Search Committee selects possible candidates to fill the retiring President Dougherty’s position, students might have some say in who will be the University’s new president. Two […]