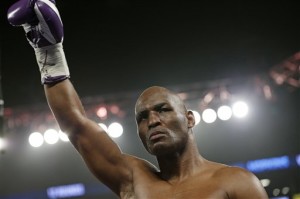 A man who knows more about boxing than almost anyone else in the game is very hard to beat. Bernard Hopkins knows more than that man. Hopkins fought his first fight in 1988, which is the year Keith Thurman, the champion on his undercard, was born.

The main event on HBO “World Championship Boxing” from Brooklyn, N. Y. was a light heavyweight bout scheduled for 12. Bernard Hopkins (52-6-2, 32 KOs) was up against Tavoris Cloud (24-0, 19 KOs). Hopkins tends to make ugly dirty fights, but it works and he wins. Cloud is younger, stronger and faster, but coming off a 13-month layoff, with a new trainer it was hard for him to utilize those advantages. Hopkins was able to move around the ring at will and land when he wanted to. Cloud did not seem like he was prepared for Hopkins’ advanced ring generalship. Cloud suffered a bad cut over his right eye in round six the cut was from a punch, but the referee called it a head-butt, which is only significant because if the fight were stopped it would go to the scorecards instead of being a TKO. Hopkins was able to control the action fight long. The fight went distance and the judges had it 116-112, 117-111 and 116-112 all for Hopkins. Bernard Hopkins won by unanimous decision, becoming the oldest title winner in boxing history. 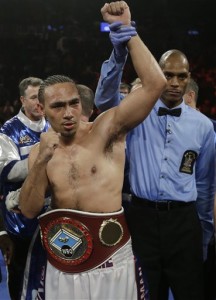 The co-main event on HBO was a welterweight fight scheduled for 12 rounds. Keith Thurman (19-0-0-1, 18 KOs) faced Jan Zaveck (32-2, 18 KOs). Thurman has incredible punching power, but is still very early in his career and has yet to face a high-caliber opponent. Zaveck may not be that but he is certainly a step up in competition. Thurman would have to find his way around the constant offense of Zaveck.  Thurman was able to adapt to the different style by using good footwork and a great body attack to weaken Zaveck. In round six Zaveck appeared to find an entry route because he started to land more than he had in the entire fight. Zaveck was very tough and took some very hard shots, but he was willing to continue testing Thurman. In round nine Zaveck suffered a cut just outside his left eye. Thurman was impressive throughout showing his ability to adapt to changes in a long fight. The fight went to the scorecards. The judges had the fight scored 120-108, 120-108 and 120-108 all for Thurman.

The main event on Showtime “ShoBox: The New Generation” from Indio Springs, Ca. was a ten round junior middleweight fight. Hugo Centeno, Jr. (18-0, 9 KOs) faced Keandrae Leatherwood (12-2-1, 8 KOs). Centeno was dominant from the beginning of the fight. He is much more technically sound and has a good jab that he uses to start his offense. Leatherwood seemed content to wait for one big shot, but he couldn’t find it and while he was searching for it Centeno was taking a large lead on the scorecards. Leatherwood was also clinching a lot and holding when they got close. Leatherwood did not appear to be trying to win. Centeno dominated every minute of this fight. The fight went to the scorecards and the judges scored the fight 100-89, 99-91 and 100-90. Hugo Centeno, Jr. won by unanimous decision.

The first fight on Showtime was a featherweight bout scheduled for eight rounds. Braulio Santos (10-0, 9 KOs) faced Kevin Hoskins (7-2, 5 KOs). Only one minute into the fight Santos landed a left uppercut after a left hook had hurt Hoskins. Hoskins tried to get back up but was clearly still affected by the fight and could not continue. Braulio Santos won by first round knockout.

The main event on ESPN2 “Friday Night Fights” from Atlantic City, N.J. was a junior welterweight clash scheduled for 10 rounds. Victor Cayo (31-4, 21 KOs) faced Emanuel Taylor (17-1, 12 KOs). Cayo was throwing more punches early, but was not as effective. Taylor was able to hurt Cayo from the very first time he landed a good punch. With a minute remaining in round five Cayo landed a good right hook that caught Taylor off guard and knocked him down. Taylor got back up and made it out of the round. The problem Taylor was having stems from his defense. Taylor covers up and tries to block punches with his arms, which can be an effective style if used right. Taylor’s defense caused him to only throw punches at certain points because he felt like he was too busy guarding himself from incoming punches to be able to throw punches. What Taylor needed to do was work through his offense more and only defend when he would be vulnerable like right after he threw a punch or when he was standing still. With two minutes left in round eight Taylor landed a counter right hook that sent Cayo to the canvas. Cayo got back up but was not ok and the referee stepped in and stopped the fight. Emanuel Taylor won by technical knockout in round eight.

The opening bout on ESPN2 was a heavyweight fight scheduled for 10 rounds. Magomed Abdusalamov (17-0, 17 KOs) fought Victor Bisbal (21-6, 15 KOs). Bisbal was able to land punches early and avoid Abdusalamov’s power. That was a surprise because Abdusalamov of his 16 knockouts 10 came in the first round. Both fighters had blood on their face by round four. A minute into round eight Abdusalamov found an opening for his left hook and finished the fight the only way he knows how, with a knockout. Magomed Abdusalamov won by 5th round knockout.

It is funny how polar opposites seem to find each other. This weekend was all about youth, until Bernard Hopkins stepped into the ring and did what he has been doing for 24 years.