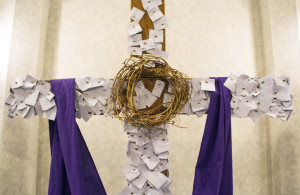 You don’t have to be Catholic to know that Lent is a very important time of year for the Church. Throughout the season of Lent we hear of people giving up chocolate, television and alcohol. Restaurants and fire halls are filled on Friday nights with people hungry to savor their favorite Lenten fish sandwich. Lent lasts for 40 days, stemming from the story told in the Gospels of Matthew, Mark, Luke and John where Jesus fasted for 40 days leading up to Easter.

Fasting is one of the key principles of Lent, not eating meat on Fridays and only eating one full meal and two smaller meals, to pay homage to the 40 days in which Jesus fasted in the desert. For practicing Catholics, however, there are two other fundamental principles that when combined help to strengthen the spiritual connection to the Church. Prayer and charity are the other elements involved in having a successful Lent. Prayer is always a guiding force in the daily lives of those who practice any religion, but I believe that the most important component of having a successful Lent is charity.

Catholics and non-Catholics alike can use Lent as a time to practice charity, something that in our day and age is sometimes forgotten and pushed aside. We are often caught up in the stress and bustle of our own lives that we forget about the needs and struggles of those around us.

I recently came across an article from American Catholic about a parish in East Palo Alto, Calif. that suffers from serious gang and drug violence. Many of the youth in this parish die before they reach high school, as there were 13 youth homicides in 2013, while the adults of the parish struggle financially to support their families. On March 8, several hundred parishioners joined San Francisco Auxiliary Bishop William J. Justice and the priests of Saint Francis of Assisi Parish in a peace walk to remember those lost to gang violence.

This parish, settled in an area plagued with poverty and drugs came together to not only celebrate the Lenten Stations of the Cross through prayer, but also to give back to the community in remembrance of those lost. “We are here because we don’t want to be going to another funeral,” said Julio Escobar, minister of peace, during a short rally in front of the Spanish-style white stucco church. “Gang members, drug dealers, God loves you. There is a different way to live your life.”

Lent is about change, not only for Catholics to grow spiritually closer to God but to change the way they live their lives. The Rev. Ray French, the director of Spiritan ministry at Duquesne, said it best in his sermon on the first Sunday of Lent. He discussed the concept that first comes to everyone’s mind when we hear the word Lent: giving up. He explained to the church full of students that Lent is about more than giving up. It is about giving back.

If you are giving up smoking cigarettes or eating desserts, instead of just not doing these actions, every time you would go to eat a dessert or buy a pack, donate that money to the food bank. You could even take an hour out of your time to volunteer at a homeless shelter. Not only are you helping yourself, you are also giving back to the community and those less fortunate. Chances are we will not remember the year we didn’t eat chocolate for 40 days or the year we stopped watching television. What we will remember, however, is the overwhelming feeling of happiness when we know that the food we donated helped feed a family of four who otherwise would not have a meal for dinner, or those jeans that we haven’t worn in ages made a young girl feel like she was wearing a brand new designer outfit.

Lent is a complex part of the liturgical year. It is a time where Jesus went into the desert and prepared to die to forgive His people’s sins. Lent is an important time of year for Catholics to pray and reflect upon their beliefs and how they want these beliefs to translate into their daily lives. I strongly believe that charity is the most important component of Lent, and one that can be practiced by any denomination or belief. You can leave the prayer and fasting to the Catholics, but look to this Lenten season to find a way to give back to the community and make a lasting charitable memory not only in your heart but in someone else’s as well.

Photo by Claire Murray – The cross in the Duquesne University Chapel of the Holy Spirit is shrouded in purple and covered in notes containing prayers to celebrate the Lenten tradition.

Carley Thieret is a junior multiplatform journalism and advertising major and can be reached at thieretc@duq.edu

By Casey Chafin | The Duquesne Duke On Valentine’s Day, Duquesne student Richard Hilliard’s life was in the balance. He had just sustained life threatening injuries after losing control of his car on the way […]

A traditional, Catholic take on a new pandemic problem

February 25, 2021 The Duquesne Duke News Comments Off on A traditional, Catholic take on a new pandemic problem

Colleen Hammond | News Editor Just like every other momentous occasion and celebration for the past 11 months, Ash Wednesday is looking a little different this year.    Ash Wednesday, the annual Christian holy day […]