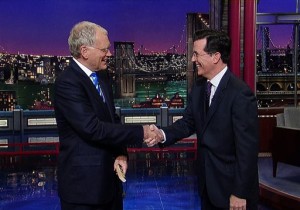 For those of you who don’t own a computer with a working Internet connection (I’m looking at you, DUQnet), Stephen Colbert is replacing David Letterman as the host of The Late Show once Letterman’s contract expires in 2015.

If your first reaction to the news was, “wait, didn’t they just replace him with Jimmy Fallon?” You can see why Colbert was the obvious choice for CBS. Despite over 30 years of airtime on The Late Night Show and The Late Show, Letterman has lost viewership over the years. According to Forbes, Letterman’s first season brought in over 7 million viewers, as now he has less than 3 million. According to the same article, the median age of Letterman’s viewers in 2013 is 58.2. Colbert’s viewership on the other hand, is below the 50 year age range. Reports from 2013 state the median age is 42.3.

The decision to replace Letterman with Colbert is an excellent idea. With Colbert’s attraction to people in their early 40’s and Letterman appealing to individuals nearing 60, it is more than possible that fans of Letterman might stick around to see what Colbert will do, drawing in a wide age range.

Colbert interacts with viewers in a way that Letterman has yet to master. In our social media obsessed society, one’s social media presence is important in appealing to more modern audiences. Colbert’s Twitter account @StephenAtHome, which is independent from his show’s @ColbertReport handle, has 6.24 million followers. Letterman, on the other hand, doesn’t have a Twitter account. Well, that is not entirely true. He has a twitter handle for the television show @Letterman, but not a personal account.

This may seem like a silly point to make; why does Letterman need a Twitter account to remain relevant? It’s not that he becomes irrelevant by not participating in social media. It does, however, show a lack of advancement that nearly everyone else in the entertainment industry has embraced. Twitter allows celebrities, politicians, comedians, writers and the otherwise unattainable to interact with the very people who make their name worth knowing. When they use social media to interact with fans, those fans walk away from their computer or phone with a more positive, human picture of who their beloved idol is. Colbert understands this, and his utilization of media makes him the obvious choice in appealing to a broader, and ultimately younger audience.

The news of Colbert’s promotion came shortly after the satirist’s latest controversy. #CancelColbert began trending on Twitter after Colbert, during an episode of The Colbert Report, satirized the newly founded “Washington Redskins Original Americans Foundation. The Ching Chong Ding Dong Foundation for Sensitivity to Oriental or Whatever,” the fictional organization that Colbert created in response to the Redskin’s organization, was blasted as being racially insensitive and offensive.

When it was announced that Colbert would take over Late Night, with #CancelColbert still fresh in everyone’s mind, Colbert’s often divisive political stances have been the main concern of critics. Colbert’s show is known for its outlandish ridicule of mostly conservative politicians, and Colbert himself has admitted, albeit briefly and superficially, his own liberal preference. We have only seen Stephen Colbert the character. It is well known that The Colbert Report is a parody of The O’Reilly Factor. Saying that Colbert is too politically minded to be an unbiased Late Night host is like saying that Benedict Cumberbatch would make a great detective because he plays one on Sherlock. Actors are independent from their characters. The Stephen Colbert we know is not the Stephen Colbert we will see hosting Late Night.

Although I am heartbroken that this means the end of The Colbert Report, which has kept me better informed than most major news outlets, the move will be good for Colbert. It will give him the chance to try something new, and allow the 67-year-old Letterman time to relax after 30 legendary years.

Jillian Power is a freshman journalism and integrated marketing communications major and can be reached at jllnpwr512@gmail.com

Kaye Burnet | Staff Writer On Thursday, Sept. 7 Secretary of Education Betsy DeVos announced that the Department of Education will be reviewing guidelines established by the Obama administration under Title IX that influence how […]

By Rebekah Devorak | Opinions Editor It’s official: Times have changed. It’s no longer 1955, when moms stayed at home and cooked healthy meals for dinner every night. According to the Bureau of Labor Statistics, […]

March 11, 2015 The Duquesne Duke News Comments Off on Month of Giving exceeds goals

By Carolyn Conte | The Duquesne Duke Duquesne recently concluded its first “Month of Giving” campaign which raised $142,114 to support University athletics, academics and financial aid. The campaign, which ended Feb. 28, was called […]