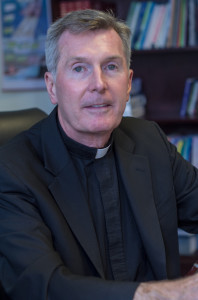 Vice President of Mission and Identity Rev. James McCloskey will be leaving Duquesne to take on the role as president of Holy Ghost Preparatory School, an all-boys college prep school in Bensalem, Pa., beginning on July 1.

McCloskey, a 1970 alum of Holy Ghost who previously served as the school’s headmaster and president from 1990 until 2003, will return to Bensalem after serving as Duquesne’s first Vice President of Mission and Identity since 2009. In his current position, McCloskey oversaw the Office of Campus Ministry, the Center for Catholic Intellectual Tradition and the Center for Spiritan Studies.

President Charles J. Dougherty said he is happy for McCloskey to be closer to home with the move, but noted the void his departure will leave among the university’s administration. He praised McCloskey for both his administrative skills and his spiritual perspective.

Dougherty also said the students at Holy Ghost will notice how well McCloskey relates to people.

“He’s got a very good combination of administrative skills, meaning that he can take data and make decisions based on the data,” Dougherty said. “He can make difficult personnel decisions; he can handle a budget … But he’s also a priest, and so he brings a spiritual motive to all of that.”

McCloskey reflected on what he learned at Duquesne and how it will help him transition back into his former role at Holy Ghost Prep, but also said he is extremely excited to return to his alma mater, the place where he says he spent his formative years.

“I love Pittsburgh, but at the same time, I also love Holy Ghost Prep,” McCloskey said. “[My experience at Duquesne] has allowed me to focus on the Catholic and Spiritan character of the institution and has allowed me to think more deeply. What it is that makes an institution, but specifically a university in its deepest sense Catholic and Spiritan.”

He said he’s excited to return to Holy Ghost, a place with a distinct “sense of community, a sense of belonging on the part of everyone, from an incoming freshman to a faculty member who’s been there 40 or 50 years.”

Holy Ghost Director of Campus Ministry Dan Ryan, who has remained at Holy Ghost since McCloskey’s departure in 2003, said McCloskey is a “visionary in terms of Spiritan identity,” something that the school has been working on.

“I think that he obviously has a very intimate knowledge of the institution. He is educated by nature,” Ryan said. “He was somebody who back in the 90s was kind of sent to Holy Ghost to upgrade it, to really enhance its education program and to get it on the financial steadying.”

Following the announcement, Dougherty said he has already spoken with the congregation in replacing McCloskey, but that the decision will ultimately be up to the Spiritan provincial.

“There’s a lot of things to be done here and that position is appointed by congregation, but I’ve been in dialogue with the provincial of the congregation to talk about our needs and how we see that role evolving,” Dougherty said.

Dougherty said it will be tough to replace McCloskey, with his skill set and the fact that there are only about 3,000 ordained Spiritans around the world.

Caption: After 10 years at Duquesne, the Rev. James McCloskey is leaving in July.

02/7/2019 Makenna Winner | staff contributor Redhawk Coffee is tucked away on the slanted slope of Meyran Avenue in Oakland. A bustling yet quaint space, Redhawk Coffee was born into the neighborhood in early 2017. […]

Raymond Arke | News Editor 03/15/18 With the misdeeds of Greek Life members across the nation dominating headlines, one of Duquesne’s fraternities has been placed on disciplinary probation by the Office of Greek Life and […]

Kellen Stepler | editor-in-chief 01/21/2021 Like the month of March, the Duquesne Duke mascot is bringing the semester in like a lion. Literally. On Jan. 13, the Duquesne Athletic department unveiled a new design for […]