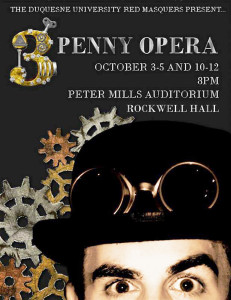 The Red Masquers put on a fabulous rendition of a musical directed by John Lane Threepenny Opera on Saturday in the Peter Mills auditorium in Rockwell Hall, during the first of two weekends of performances. The play has been performing since Oct. 3 and will continue playing through Saturday.

Every cast member was on point with every note, the actors obviously worked hard to be as believable as possible as their performances were impeccable and the costumes and set were perfect for the time period that was being represented.

Threepenny Opera follows the protagonist, anti-hero, Macheath, played by Jeff Way, a Duquesne alum. The play consists of his many endeavors which are both matrimonial and criminal as he marries a woman, Polly Peachum, played by Caitlin Young, and tries to stay out of prison with his many connections with the police in an alternative Victorian England.

The show’s acting was flawless and wonderful. The actors chosen to be cast in this production were chosen carefully for each role. The cast worked well together, with much chemistry, and every person had strong stage presence.

Way was rightfully placed as the star of the show, Macheath. Not only is his stage presence phenomenal, but his voice is absolutely out of this world. His vocal range is unbelievable and he is absolutely marvelous. His ability to hit different notes in different ranges and his ability to hold a note for an extended period of time is quite impressive. His immoral criminal character was so much fun to watch on stage. He was so rude, but somehow, was still the character that was the best in the sense that the character’s antagonistic personality did not influence the typical hopes for a protagonist to escape execution for his crimes. He was the criminal who I hoped would get away from the police.

The hysterical and pragmatic alcoholic, Mrs. Peachum, was played brilliantly by Anne Brannen, English professor. The character’s realistic views on life, hinted by the advice she gives to her daughter, Polly, played by Young, and her indulgent tendencies with alcohol create a strong character. Brannen did nothing but make the character stronger and fun. The way Brannen would waltz across the stage with drunken ease gave much enjoyment to the audience.

The cast was the highlight of the performance, but the show’s surroundings were very well done.

With its wonderful aesthetic appeal, the set was absolutely stunning due to the fantastic look of the stage. The backdrop was covered in words with a Victorian letter font. It spelled something difficult to read from afar, but it was the aesthetic that seemed to count as it radiated the time period in England. The pit sat in the center of the back of the stage, where the pit musicians could always be seen. The pit consisted of a keyboard, drums, a flute and a violin. The violin and flute added to the Victorian feeling of the set. The walls were meant to look like rustic brick. From the sides and centers of the walls were nooses hanging from them, giving a sense of tragedy and foreshadowing that death wasn’t far behind.

The costumes were wonderfully chosen. The prostitutes were scantily dressed and had elaborate and bright colors. They wore beautiful dresses and Victorian undergarments that caught the lights perfectly. The best costume piece of all was the elaborate feather hat worn by Brannen as Mrs. Peachum. It was so over-the-top and chic. The hat was a perfect fit for the character. She was wild and eccentric, just like her hat. Other costumes that were aesthetically pleasing were the police costumes. The pieces worn by the authority figures wereunlike the police outifts we are used to seeing in the public eye today. The costumes were very cohesive with the other costumes which were Victorian as well. All costumes caught every viewer’s eye.

Threepenny Opera’s actors, costumes and set were impeccable and worth seeing. It is a very enjoyable option for a weekend night. Admission is free for Duquesne students.

Adam Lindner | Sports Editor March 28, 2019 Each March, the NCAA Tournament demands the nation’s attention, decreasing work productivity in the process. Besides, who has time for anything else when there are games to […]

By Kaye Burnet | The Duquesne Duke For Duquesne junior Michael Rand, finance and math fit together perfectly. “The mathematics background is extremely important, especially in finance applications,” Rand said. “The math is good to […]

By Julian Routh | News Editor When he is not working towards his degree in the Mary Pappert School of Music, junior music performance major Jeremy Feight is in Ghana innovating the country’s musical culture […]