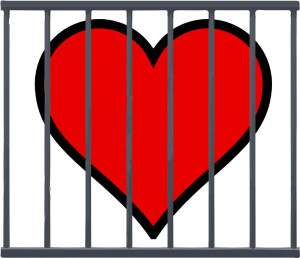 As taught by our mothers during our youth, a kiss can fix any problem. But sometimes, a kiss can spark an international debate.

Three teens from Nador, Morocco have learned this lesson as they await their trial in court that could result in a two-year prison sentence. What heinous and unlawful act did these kids commit?

Kissing in public, then posting a picture of it to Facebook.

At the beginning of the month, a photo of a 14-year-old girl kissing a 15-year-old boy was taken by their friend, who then posted the photo to Facebook. According to BBC News, a local newspaper printed the photo, which caused public outrage resulting in all three teens being arrested and charged with public indecency.

The incident caught the attention of social media users across the globe. It sparked a debate in the Muslim country of Morocco. A “kiss-in” protest was organized in front of Morocco’s parliament in Rabat on October 12th, where over 30 citizens locked lips and shouted “Long Live Love!”

The hashtag #FreeBoussa (Arabic for “free kiss”) trended on Twitter with dozens of kissing photos, captioned “now you can arrest me.” A movement to post one million kissing photos online was initiated by co-founder of Alternative Movement for Individual Liberties, Ibtissame Lachgar.

To us in the land of the free and home of the brave, this incident sounds absurd. If every public peck resulted in an arrest, American prisons would be full. Though we’ve all thought, “get a room!” at the sight of public displays of affection, we didn’t imply that the room should be a jail cell.

Since the majority of Morroco’s population is Muslim, its culture is starkly different from that of the US. This incident serves as another topic of debate between the young modern liberals and the elderly traditional conservatives. BBC News claims that some citizens feel that the children should not be penalized for mimicking what the see on TV. On the opposite end of the argument, those interviewed for Aljazeera America believe acts that go against conservative beliefs, such as kissing or eating during the fasting month of Ramadan, belong behind closed doors.

One aspect of this incident can be agreed upon internationally; social media has once again served as the first domino in a cascade of backlash. By posting the kissing photo to Facebook, the teens immortalized the event for all to see, including those who may disagree with their display of affection. But at the young age of fourteen and fifteen, they might not have realized that not only is Facebook as public as the outside world, but technology keeps it in public long after the moment has passed. While a kissing photo in America might get some displeased comments from a parent or relative, when it’s a photo of underage drinking, the repercussions can be as harsh as what the Moroccan teens are facing.

Political analyst Mohammed Madani stated for Hurriyet Daily News that “activists agitating on Facebook are a potent force because they can get media attention, sometimes abroad, and can shake the conservative values both of society and the state.”

And it seems like the social media support has already influenced the government officials at the head of this trial. Their Oct. 11 trial was hastily adjourned until Nov. 22 in order to make “an inquiry into the social circumstances of the teenagers”, as stated by their lawyer Monaim Fettahi for Hurriyet Daily News.

But is this incident worth getting the police involved? Disciplinary action from the parents is understandable, but some feel that the police should focus on more serious crimes. While more liberal cultures may feel that incarceration is ludicrous, incidents such as this serve as the catalyst to social reform.

Are these affectionate teenagers the Rosa Parks of the Religious and Cultural Tolerance movement in Morocco? It’s hard to say at this point. One thing is certain; like the 1945 V-day kiss in Times Square and the more recent Vancouver Riot kissing couple, this is another kiss that will not soon be forgotten.

By Duke Staff It is always a somber moment when we discover someone has died, despite the relation or lack thereof. However, would one be mourned or remembered in the same way if a needle […]

Casey Chafin | For the Duquesne Duke A new exhibit on the third floor of the Duquesne Union showcases artwork and poetry created by an unusual group of artists — prison inmates. Last week, “Art […]