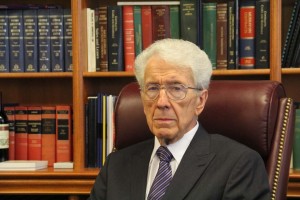 By Victor Essel | The Duquesne Duke

Murray holds the title of chancellor for being a respected leader in his studies at the University.

The International Conference is the largest annual scholarly and educational event devoted to contracts and related areas of commercial law. There is discussion of contract-related issues and includes a mix of senior and junior scholars from national and international backgrounds.

“I was joined by friends and colleagues, and we enjoyed a very nice dinner,” Murray said. “Those who attended were teachers and writers of contract law from around the world, but mostly Americans.”

Murray, 80, served as Duquesne’s 11th president from 1988 to 2001 and is currently teaching classes at Duquesne’s School of Law. His publications and articles are referenced by courts and universities throughout the country.

“It is special because this is recognition from my peers. These are the people that do what I do, and they understand and recognize my life’s work,” Murray said.

Murray said scholarship and contract law are important aspects of his life’s work. He said he enjoys teaching law, including writing and research in the field.

“I have always carved out time to do what I like. Writing can be very difficult, but it is the most rewarding,” Murray said. “I enjoy having deadlines – there is always one in the near future.”

Murray said he enjoys and will continue teaching law because it is an “applied philosophy.” Early on, he developed an appreciation for philosophical thought after studying it as an undergraduate at La Salle University.

Nicholas Cafardi, dean emeritus and law professor, said Murray is a “giant in his field.”

“This honor is more than his due, because Dr. Murray has given his scholarly life to the field of contract law, in ways that have benefited the courts, practitioners of the law and his beloved law students,” Cafardi said.

Cafardi said he was lucky to meet Murray when he was a young law student and Murray was a young professor of law.

“He has been my mentor and friend ever since,” he said.

Giallonardo said Murray’s classes are exceptional, and that Murray’s “passion and knowledge of the subject” makes the class go by quickly.

“His teaching surely exceeds his reputation,” Giallonardo said. “Not only are we, as law students, learning from a man who actually wrote our textbook, but he just so happens to be a leader in the field of contract law, as evidenced by his most recent lifetime achievement award.”

“Duquesne grew from about 5,000 students to over 10,000 students in about 10 years,” Murray said. “Under my administration, we created numerous new buildings and facilities, expanding the campus to much of what it is today.”

Many of the buildings around campus were refurbished or created during Murray’s tenure. Rockwell Hall’s skywalk was constructed and the parking garage, the Student Union and the Living Learning Centers were refurbished.

He had one piece of advice for Duquesne’s current students.

“I believe in a virtuous life. We should practice the habit of trying to get better day by day – physically, mentally, morally, spiritually – no matter who you are,” Murray said. “If you do not intend to do this, stay in bed.”

Raymond Arke | News Editor 11/16/17 On Nov. 13, the student body had an opportunity to engage with Duquesne’s administration about the university’s new five-year plan. The “Fireside Chat” with President Ken Gormley and other […]

April 4, 2019 The Duquesne Duke Opinions Comments Off on We need to change the way we think about immigration in the U.S.

04/04/2019 By Ollie Gratzinger | Opinions Editor At the end of March, photos taken under a bridge in El Paso took the internet by storm. Hundreds of migrant families were packed into a parking lot, […]

Staff Editorial: ‘Get our city out of your mouth’

Staff Editorial 01/28/2021   On his first day in office, President Joe Biden signed 17 executive orders that focused on reversing Trump administration policies — including a letter that states the country’s intent to re-join […]