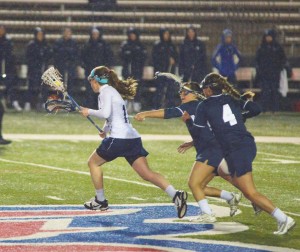 The Duquesne women’s lacrosse team put up a solid effort on a rainy night against the 11th ranked team in the nation. The Dukes (2-1) fell to Penn State (2-1) 16-9 at Rooney Field on Wednesday night.
Coach Michael Scerbo said he thought his team held their own against the Nittany Lions.
“In the first half I would have said [we compared to the Nittany Lions] not too well, but in the second half we were right where we wanted to be,” he said.
The Dukes started to turn the game around in the second half, but they would let Penn State back into the game. The Dukes went on a four-to-one run in the first 10 minutes of the second half. The Nittany Lions called a timeout after junior midfielder Caitlin Prince found the back of the net off of a nice pass from junior attacker Haley Marafioti with 20:49 remaining in the game. That got the Dukes as close as they would get for the remainder of the game. Penn State would score four of the next five goals giving them a seven-point lead.
Scerbo recalled what he said to his team during halftime to motivate them.
“[We talked about] playing with confidence,” he said. “In the second half we took it to heart and started believing in ourselves. That put us in position to play with [Penn State].”
The Dukes struggled throughout the first half. The Red and Blue allowed 21 shots in the first half, which was more than they had allowed in either of their previous two games and allowed nine goals in the first half, which was more than either of their previous two opponents had scored in a full 60 minutes.
All the offense for Penn State had nothing to do with the work of junior goalie Kristen Gregory, who made 13 saves.
Scerbo liked what he saw from his budding star Gregory.
“She had a great day today,” he said. “She put us in a position to have a chance in this game.”
The Dukes did get some good contribution from a few players. Prince score 6 goals and was 3-for-5 on free position shots.
Prince said that she has confidence in her play.
“I know I can do it so when my team needs me the most I can do it,” Prince added.
The Dukes also got a solid game from Clare Hurley who had two goals, two ground balls and caused two turnovers.
Leading the way for Penn State was Kelly Lechner, a sophomore midfielder, with three goals and one assist. Maggie McCormick, sophomore attacker, also had a big day for the Nittany Lions. She had one goal and five assists.
The Dukes’ non-conference schedule does not get any easier Saturday. They host Notre Dame at 2 p.m., who is currently ranked seventh in the nation.

January 30, 2020 The Duquesne Duke Sports, Women's Lacrosse Comments Off on Desrosiers excited for second year at helm of women’s lacrosse

David Borne | Sports Editor Jan. 30, 2020 The “sophomore slump” is a term sports fans and analysts love to toss around. Anytime a player, coach or team exceeds expectations in their first season, there’s […]

Scerbo reminisces on past 10 years at Duquesne

February 18, 2016 The Duquesne Duke Sports, Women's Lacrosse Comments Off on Scerbo reminisces on past 10 years at Duquesne

By Joseph Sykes | Sports Editor In 2005, Mike Scerbo left his former job at Ohio State University to come to Pittsburgh in order to take over as only the second-ever head coach of Duquesne […]