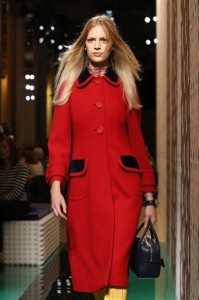 Fashion week has again passed for spring 2014, but the thrill still remains. Looking over the trends, spotting the best beauty tricks and picking up on all the colors and prints is what people love after the hustle of the runway. This upcoming season is no different – from pastels and floral print to deep royal colors with lace, the spring 2014 season had it all.

New York Fashion Week always marks the start of the season. Certainly, the designers of New York did not disappoint. Featured were many different styles that seemed to shine through on the runway, making it hard to pinpoint exactly where this season would lead us.

One of the most prevalent trends was a rich red that appeared in many forms. Marc Jacobs’ collection featured the bold, dark colors from his fall collection, redone with an air of Victorian style, shades of red and contrasting prints in cropped jackets and wide-leg trousers. Diane Von Furstenberg showed red mixed in with gallant prints of black and white in variations of knee-length dresses and skirts.

Marc Jacobs is always one to turn the tables and Hamish Bowles of Vogue stated it best, saying, “The collection … suggested a topsy-turvy world.” The royal trends of lace, cuffs and deep colors that came from several designers certainly made a statement, compared to the simplicity of many styles from past collections.

Trends in fashion are moving back to the fantastical look of a Victorian period with embellishments which as Jacobs said is turning the fashion world upside down. This style is exactly what fashion needs to rejuvenate the image of style. The regular looks of high end fashion as we have seen in the past are usually representative of the past fifty years. This new look in style is exciting and gives options that the people today have never had before.

On the other hand, pastels once again popped up in many shows, paired with minimalistic designs. Alexander Wang displayed soft pastels with grey and white in men’s fashion pieces. These pieces being style tops tied with lots of midriff tops. Pastels also appeared in Prabal Gurung, this time with the sheen of silk in varsity jackets, high collared shirts and lovely evening gowns.

Glamour Magazine listed pastels as their number one trend from this ready-to-wear season, because they can be worn in every different style. It’s not surprising to see that pastels once again popped up in many famous designer trends, as this season always calls for the soft style of the favorite spring palette. However, Alexander Wang’s take on simplicity brings a new spin on the conventional. His traditionally sporty collections are never boring, as these clean cut looks never go out of style.

Unlike the Victorian styles that Jacobs and Von Furstenberg are putting out on the runway, these carefree color pallets and youthful silhouettes speaks to a younger demographic. It is very important to have something fun for the everyday person to wear that makes them stand out, in a different way than a Victorian ruffle would. It is an excellent contrast to the mature and brooding look of Jacobs and Von Furstenberg.

London fashion week’s collections were not far off from New York’s highlights. The Brits are the ones to show off the best outerwear, hands down. Amazing jackets and blazers were seen in many of the runway shows. Christopher Bailey at Burberry Prorsum focused on darker shades of pastels with lots of lace and sheer pieces, under voluminous, soft jackets. Tom Ford’s collection busted out a whole new level of stunning with black and white reptilian designs featured on sharp leather jackets and party dresses with silver accents.

It was no surprise to hear that Tom Ford, who is a natural knockout with his collections, was a number one hit at London fashion week. Tim Blanks of Style highlighted Ford’s key motifs, fractured mirrors and spidery lace, which created a hauntingly beautiful scene on the runway. Famous fashion blog, Fashion Gone Rogue, stated the facts: “While a lot of London designers previewed soft and romantic looks, Tom Ford’s woman is headed in a more sensual direction as seen by the collection’s skin-tight silhouettes and short hemlines.” As this was Tom Ford’s return to the runway, his spring collection followed a confident, carnal flavor. Instead of the more conservative and feminine styles, Ford took a sharp turn into the wild.

These styles put out by the Brits are a perfect mixture of what the Victorian inspired designers and the fun loving Wang are attempting to create. Darker shades of pastels and adding the accents of lace and sheer pieces are perfect for the girl who is in the middle of perky pastel girl and intense Victorian queen.

The Italians are always ready to shock and awe – this spring was no exception. At Milan fashion week, nothing was bolder than the designs that sprang from Moschino and Prada. Moschino stirred up repetitive patterns from a pallet of (yet again) black, white and red in pairing styles that read good girl versus bad girl. Leather versus lace, low-cut versus high-collar, Moschino referenced all eras with their eclectic collection. Miuccia Prada followed suit with the brazen palette from Moschino in her Prada runway show. “Female Power” would have be the idea here, as jeweled brassieres and pop-art prints of women’s faces were plastered on what Miuccia claimed were, “the most beautiful dresses (I’ve) ever made.”

Suzy Menkes from the New York Times said this of Miuccia’s unique collection: “With the vivid green, red, yellow and blue colors; the knee-high, sporty leg warmers; and sometimes colored feathers in the hair, the effect was tribal.” And tribal it was, taking from a powerful feminist energy channeled through her illuminating designs. No stranger to activism, Miuccia wanted to reach deep inside to empower women with her creative collection. The set itself was painted with murals of famous women mixed with striking hues, setting the tone for Prada’s electric spring show.

This style that the Italians are coming out with are perfect for the empowered woman. She will feel unstoppable in these clothes. Nothing will ever be able to stand in her way if she is wearing Prada and dressed like a chic Milanese woman.

The sheer multitude of trends from this upcoming Spring 2014 season is exciting and explores the daring side of designers. We will always see floral prints and pastels pop up in some arrangement in the spring season. It’s refreshing to see the embellishments and intrepid prints of many collections bursting onto the runway.

Courtney Downing is a senior Advertising and Public Relations major and can be reached at clyndowning@live.com.

How to Survive Freshman Year

August 19, 2015 The Duquesne Duke Opinions Comments Off on How to Survive Freshman Year

By Rebekah Devorak | Opinions Editor There are few firsts in life that are as equally thrilling and terrifying as journeying into the freshman year of college. For many, the past handful of school years, […]

Jacob Hebda | Staff Writer 01/25/2018 Over the past few seasons, the Duquesne football team has had one of the best offenses in the Football Championship Subdivision (FCS). While star players A.J. Hines and Nehari […]