By: Carrie Garrison | For The Duquesne Duke 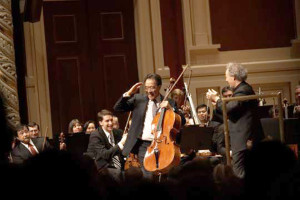 Friday marked the opening of the Pittsburgh Symphony Orchestra’s ﬁrst concert of the season and featured an exclusive gala with Hors d’oeuvres, a silent auction and fairytale themed attire. The grand lobby featured hanging green garland and green candlelight. The stage even ﬁt the fairy tale with an enchanting woodland forest theme: ivy was hung from the ceiling and greenery was surrounding the musicians.

The Pittsburgh Symphony Orchestra performed brilliantly, as they always do. Their ﬂawless intonation, perfect ensemble and great conductor, Manfred Honeck, provided a wonderful opening to the season and a great ﬁrst half of the concert.

After the orchestra’s portion, Ma was welcomed onto the stage.

He came out with the grace and elegance of any great musician. His silver cumberbun and bow-tie sparkled in the lights of the Heinz Hall stage. His smile undoubtedly lit up the room and he gave the orchestra’s director, Manfred Honeck, a big hug before he began playing.

Ma played Tchaikovsky’s “Andante Cantabile” (from the String Quartet No 1 in D Major, Opus 11) and Tchaikovsky’s “Variations on a Rococo Theme for Cello” and “Orchestra, Opus 33.”

He began the Andante Cantabile by looking up at the heavens and every note he pulled from his cello was crystal-clear. His ability to communicate with the orchestra while he played was unbelievable. It sounded as if he had been working with the Pittsburgh Symphony for years. His full command of the tempo and the orchestra was awe-inspiring and his perfect romantic style, with long gorgeous phrases and pure elegance, was positively captivating.

The second piece Ma played with the orchestra, also by Tchaikovsky, was just as beautiful as the ﬁrst. Ma’s bowing articulation and perfect intonation ﬁlled the hall. His rich depth of sound was so remarkable. His ability to play so effortlessly was amazing. It was almost as if the cello were an extension of his body. There were moments of pure joy in this piece where Ma was nearly leaping off his podium with excitement. His passion for music was overwhelmingly obvious and brough excitement and exuberance to the audience with excitement and exuberance.

At the end of Ma’s breathtaking performance, he graciously played an encore, playing Franz Schubert’s “Litanie auf das Fest Aller Sellen, D. 343” with the orchestra. This truly put a ribbon around a perfect evening with Ma and the Pittsburgh Symphony Orchestra.

The whole night really felt like an enchanted evening. Many guests were dressed in ﬂoor-length ball gowns and some couples were dressed as Disney Princesses. Seeing Yo-Yo Ma perform on the Heinz Hall stage was a once-in-a-lifetime opportunity that perfectly opened the new season of the Pittsburgh Symphony.

Alex Wolfe | Staff Writer 02/22/18 “My love letter to water.” That’s how Associate Professor of Music Technology Lynn Purse referred to her newest composition. The piece, titled “Watershed for Cello and Orchestra,” is a […]

By: Zach Brendza | Features Editor  Mumford hiatus Oh how the mighty have … well it isn’t exactly a fall, I suppose? Mumford and Sons have played their last show, “for the forseeable future.” In […]

September 30, 2021 The Duquesne Duke Arts & Entertainment Comments Off on Pittsburgh Symphony tunes in with live audience

Rio Scarcelli | staff writer Sept. 30, 2021 This past weekend, the Pittsburgh Symphony Orchestra kicked off its opening night with the ensemble’s first indoor performance since March 12, 2020.  Many festivals and pop-up concerts […]