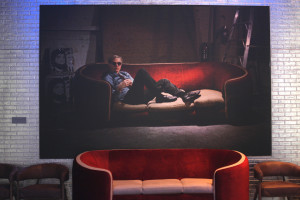 On Oct. 17, the museum announced the completion of its first floor renovation project. Visitors to the museum now walk into a bold recreation of Warhol’s original art studio, complete with huge windows, silver-painted brick walls, and rustic seating.

According to Emily Meyer, assistant communications manager for the museum, the lobby renovation was meant to “capture the idea of Warhol’s Factory.” The Factory, or Silver Factory as it was sometimes called, was the name Warhol gave to his art studio in New York City. It was a bustling place, where artists gathered to share ideas and defy cultural norms. Meyer explained that the museum would like to provide a similar forum.

“It’s designed with work spaces and plenty of furniture. It’s a good area to meet with friends or just hang out,” Meyer said.

The tables and chairs are reminiscent of the converted warehouse where Warhol worked. The black chairs are cast-iron, and tables are rough-cut wood. Huge concrete columns dominate the room.

More modern elements include several flat screen TVs and an iPad bar, where visitors can “check out what’s new at the museum and browse the web,” Meyer said.

“I think the first floor is really cool. The silver walls are just like his [Warhol’s] old studio … How absurd and futuristic it is really strikes you. How else could you experience that?”

One of the nicest aspects, according to Meyer, is the fact that visitors do not have to pay museum admission to use the new space, but can simply walk in.

“Originally, the first floor was a darker space, and the two big windows were not open to the street,” Meyer said. “Now they let lots of light in. There was Andy Warhol wall paper and a self-portrait that visitors saw first.”

Funding for the renovation came from various donors and the Carnegie Museums of Pittsburgh organization, according to the Warhol Museum director of finance and operations Rachel Baron-Horn.

Baron-Horn thought the space was perfect for young people.

“It would be a great place for group study or working on a group project. When we renovated the space, we kept concerts and acoustics in mind. Duquesne students can expect a lot more from the Warhol in terms of programs and concerts, because now we have the space.”

In addition to the lounge renovation, the museum is in the process of re-hanging their entire collection, according to Meyer. By spring, the chronological display of Warhol’s work that formerly resided on the first floor will be moved to the seventh, and the traveling exhibits will be moved from the seventh floor to the second.

“It’s really just part of refreshing the space. We are making a lot of changes to celebrate the museum’s 20th anniversary in May of 2014. It’s been in the works for a few years,” Meyer said.

Another interesting program that the museum will soon offers a Sound Series concert featuring Jenny Hval with special guests The Garment District.

The Sound Series is a collection of concerts held in the museum’s performance space on the first floor. Norwegian singer and songwriter Jenny Hval will be performing as part of her first North American tour on Nov. 1 at 8p.m.,, according to Jennifer Baron of The Garment District.

The Garment District will be opening for Hval. Baron, former member of The Ladybug Transistor, described her group’s sound as “the intersection of melody-driven pop-music and more experimental music.”

Baron sees a connection between her sound and Warhol’s art.

“I’m a huge fan of the museum and of Andy Warhol. I studied art history in college, and I’ve been going [to the Warhol museum] since it opened. It’s a huge honor for me to be able to perform there.”

Koshute, in addition to working at the Warhol, will be playing lead guitar for The Garment Distract for the concert. He also thinks the band’s sound tries in well with Warhol’s overall message.

“Warhol was integral in getting support for the Velvet Underground, a band from the 60s and 70s New York scene. He’d put together shows for them with visuals to accompany the music, to make an experience. And that’s what The Garment District is going to do. We’ll be using videos to illustrate the music, which ties into a lot of Warhol’s film work. The audience will really be encouraged to get involved in the total vibe of the performance,” Koshute said.

Admission to the show is $15 for adults and $12 for students and museum members.

Admission to the museum is $20 for adults. Students who present a valid Student ID pay $10, and Duquesne students in the Honors College and the Bayer School of Natural and Environmental Sciences receive free admission.

“There’s a lot the museum has to offer them [young adults],” said Meyer. “We want people to come experience the arts.” 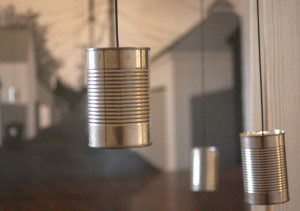 To those of you who think Pittsburgh’s fall art installations climaxes with a giant bath toy floating by The Point, you are sorely mistaken.

Celebrating its 35th year in the North Side, the Mattress Factory takes art and turns it into an experience. To commemorate the occasion, the museum unveiled works by six artists for the exhibition Detroit: Artists in Residence.

Through varying interpretations and viewpoints, the exhibition reflects a town in transformation after its industrial glory.

Mattress Factory co-directors Barbara Luderowski and Michael Olijynk visited Detroit in 2011 and “were shocked with how separated Detroit was from the rest of the U.S.,” according to donor relations and development officer Alexis Tragos.

She explained that Luderowski and Olijynk felt that the movement occurring in Detroit was akin to the foundation of the Mattress Factory in the 1970s.

“Artists can purchase multiple homes for $5,000 and really transform the neighborhood. Once the artists come in, the academics follow, then the young professional and the families,” Tragos said

Jessica Frelinghuysen’s installation, My City is Your City, is an audio representation of Hamtramck, a small town outside Detroit.

Through her self-constructed sound collecting suit, Jessica recorded the voices and sounds of the neighborhood around her. To share these sound bytes, she put speakers in cans and hung them from four foot plywood trees. The viewer simply picks up a can and listens to the story on the other side.

The noise, conversations and music recorded leaves you feeling like you’re in the hustle and bustle of the big city. What city in specific is up to your own interpretation.

“I originally thought it was recorded right here in the North Side. It’s funny how similar these city sounds can be. Those sounds could have been recorded almost anywhere; they’re universally urban,” museum shop manager Sam Ditch said. 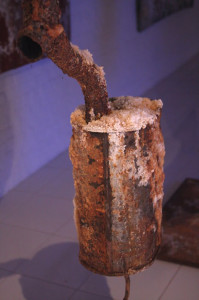 In the artist’s statement for the Mattress Factory, Orlando explains that the idea stemmed from a Time magazine photo essay on salt mines in Detroit. When offered the opportunity for an installation at the Mattress Factory, he saw the parallels between the steel industry and the automotive industry, but he also saw the cities share the common bond below the earth’s surface, specifically through their underground salt. The title Cured doesn’t just refer to the process of preservation through salt; it also reflects the question in the mind of all Detroit residents: can their city be cured?

The Detroit exhibition is not the only new aspect to the Mattress Factory. The museum opened its newest building, located at 516 Sampsonia Way, next to the normal facilities, with the installation Trace of Memory. According to art installer Kevin Clancy, the Mattress Factory acquired the building in 2005 and contacted Chiharu Shiota about doing an installation in their raw facility in the past year. Tragos said that Shiota “felt a connection to that building.”

“Her work focuses on memory and the loss of memory and her installation focuses on what memories the building reflects. When you look at those objects through all the layers of yarn, it almost creates a hazy feeling, which is what happens to your memories after a while,” Tragos said.

With the elaborate web spanning a half a million feet of yarn, surrounding everyday objects such as books, a bed, and a wedding dress, it feels as if these memories are trapped out of your reach, similar to how memories are sometimes out of your grasp.

Janine Antoni gets museum-goers in the Halloween spirit with her new exhibit, Within. What first might seem like ornate clay bowls, after closer inspection you realize that the bases of the bowls are made of real hipbones. Crawling around the massive tree trunk that fills the room is a pair of human spines made to look like a snake.

The Mattress Factory has other exhibits for viewers to explore, including Yayoi Kusama’s Infinity Dots Mirrored Room and Repetitive Vision, as well as Scott Hocking’s Coronal Mass Ejection.

By: Megan Tomasic | The Duquesne Duke Later this month, The Andy Warhol Museum will open two new exhibits that feature Warhol’s early works and pieces that display historic artwork of the modern era. The […]