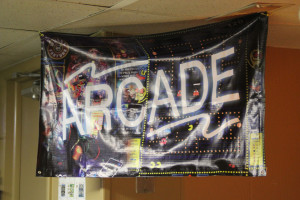 The Penn Hills Game Exchange is more of a community than a game store.

When a customer enters the tight space they are immediately greeted by a very large selection of games. Either Stuart Chester of Philadelphia or Anna Hegedus, of Cambria County, both in their late 30’s, man the shop. They are warm and welcoming and make sure whatever kind of entertainment you are looking for can be found immediately.

“I wanted to give people a place to go, where they can feel comfortable and be themselves,” Hegedus said.

The Penn Hills Game Exchange, which has been open since February, has video game cartridges and discs on all sides as the customer enters. The counters are stuffed with every kind of game imaginable, everything from Japan only releases to Grand Theft Auto V. Along the wall behind the counter are all types of accessories like controllers and cords and the like. Toward the back wall is the snack bar, where they stock movie theater-sized candy.

When a customer makes a right into the arcade, lights and sounds bring the place to life. In the arcade, there are racing games, shooters, pinball machines and more. According to Hegedus they have upwards of 50 more arcade games that they don’t have space for.

The store thrives off of classic video games and consoles. Hegedus and Chester have systems and games from the ‘80s and ‘90s. That is what separates them from the national chains and even some of the smaller stores. Not only do some of these systems suit needs of collectors, but they also tend to be sought after by the aging, nostalgic gamers. People have traveled from as far as Ohio and Virginia to find consoles that this store has, according to Chester. The store has rare games like Sonic Blast for the Master System, the Brazilian version. This game goes for $300 online, but they have it listed at $150.

The Penn Hills Game Exchange also has everything from today’s gaming market. They get the new releases and even have a few of the latest generation of consoles and can fix almost any console. They also have projectors, which they will come and set up at any event, according to their website.

The thing that Hegedus and Chester take the most pride in is the atmosphere created by their promotions, including a weekly fighting game event. 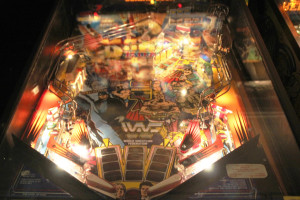 “One of our ongoing promotions is Fight Night on Tuesday nights. Normally the arcade is $5 an hour, but that $5 gets you in for the entire evening,” Chester said. “Our promotions are geared towards getting people to play together, rather than just dollars off.”

Hegedus discussed how the store’s advertising has changed and grown since they opened.

“Mostly at first it was social media and we have advertised in some small local papers. Now we are doing some of the medium-sized papers along with some radio. For the most part I want to rely on word of mouth,” she said.

Promotions like this remind Hegedus why she opened her shop.

From the outset, the store has not been an easy venture by any means for Hegedus and Chester. They were faced with challenges while trying to find a space around town where they could set up shop.

That is until one afternoon on a drive home.

“It was actually kind of an accident. We live right up the road and we drove past here and the space was open,” Hegedus laughed. 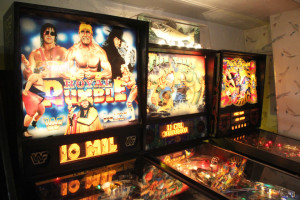 Although difficult, Hegedus see the importance of her store

“Its really, really hard. But it is all worth it when I make a gamer like me happy.”

February 22, 2018 The Duquesne Duke Arts & Entertainment Comments Off on If we want progress, stop scapegoating gaming

By Grant Stoner | Staff Writer 02/22/2018 Last Wednesday, high school students and faculty members became the victims of yet another mass shooting, this time in Parkland, Florida. A 19-year-old gunman ended the lives of […]

September 21, 2017 The Duquesne Duke Arts & Entertainment Comments Off on PewDiePie needs to grow up, learn from past mistakes

By Bryanna McDermott | Asst. Photo Editor 09/21/17 Editor’s Note: This article discusses racial hate and references derogatory and harmful slurs. It has not been Felix Kjellberg’s year. The YouTuber, better known as Pewdiepie on […]

August 17, 2017 The Duquesne Duke Arts & Entertainment Comments Off on Advocates continue to fight for gaming accessibility

By Grant Stoner | Staff Writer I pride myself on being a gamer. Despite my physical limitations, I have yet to let my disease prevent me from partaking in my favorite hobby. My consoles, handhelds […]