By: Mike Richards | The Duquesne Duke 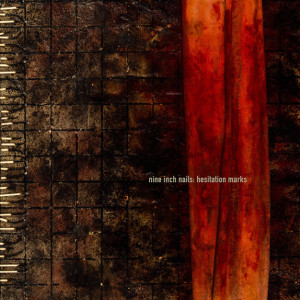 Nine Inch Nails released their first album in five years, Hesitation Marks, this past Tuesday with much anticipation.

The industrial rock band, formed in Cleveland 25 years ago by singer Trent Reznor has released eight full studio albums since its founding. The band has a very recognizable and almost revolutionary style that many of its fans became enamored with. In some songs, Reznor modifies his voice using computer software, which sets the overall sound of the band apart from many others that fall into the rock category. The band also uses complex time signatures and incorporates dissonance and chromatic melody to amplify the band’s unique sound.

Hesitation Marks features a total of 14 tracks, with over an hour of total play time. Hitting the studio in 2012, Reznor had only planned to record a few songs for a forthcoming greatest hits album, but the sessions yielded more songs until culminating in the creation of the new album, including Lindsey Buckingham, guitarist and male vocalist of Fleetwood Mac and even Pino Palladino, the bassist for The Who. NIN’s latest release received positive reviews from critics, including earning an average score of 76 out of Metalcore’s 100 point scale, based on 26 reviews.

The album itself flows almost seamlessly across the tracks, having catchy computer effects along with beats and guitar riffs that relax yet stimulate the mind. The electronics found in NIN’s earlier albums are still present, with a fresh and “jammy” new feeling. The almost simplistic lyrics have a way to capture the imagery of survival and rebirth, bringing listeners into almost a hypnotic state of realization to these innate and humane feelings to which everyone can relate.

One track in particular, “Everything”, can be described as somewhat of a power-pop anthem which deviates from the normal NIN’s musical style. The lyrics describe the feeling of overcoming adversity and defying all odds. Reznor sings “I survived everything. I have tried everything. Everything and everything and anything.” NIN takes basic sentences and word choices and redefines how listeners embrace this feeling of survival. “Everything” is a good example of how Nine Inch Nails has progressed and reinvented themselves as being a modern industrial-rock band.

The aspects of Hesitation Marks that set it apart from other albums are both subtle and revolutionary in the way that they are shaped and projected into the listeners’ minds. Any music aficionado can attest to how the simplicity of the catchy tunes speaks louder than what might be first realized on the surface. The pseudo-robotic and futuristic sounds blend almost perfectly with NIN’s earlier styles, which leaves listeners craving more. Any fan of Nine Inch Nails can feel a sort of nostalgia towards the new tracks, bringing them back to the original flair that they fell in love with years ago.
Fan of Nine Inch Nails or not, I recommend checking out Hesitation Marks. The highly anticipated album will satisfy any rocker’s need for guitar and groovy sounds and will leave you with a longing for more. Give it a listen. And let the sounds of this new age in NIN’s legacy carry you to places you’d never expect