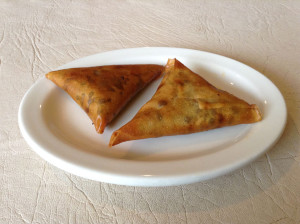 Pittsburgh is a pretty cool city. You can do, see and even eat things you might not expect to find. Tana Ethiopian Cuisine is a prime example.

Situated at 5929 Baum Blvd. in East Liberty, the Ethiopian eatery has a sophisticated, yet accessible feel. The restaurant is furnished with hardwood floors, African/Ethiopian artwork, delicately folded red napkins and long windows that lookout onto Baum Boulevard, while classical music on NPR plays through the establishment. Tana has a tranquil atmosphere, with the combination of its amenities and it being not very crowded. It’s the little things, you know?

Appetizers range from $3.50 to $4.50 and the most expensive entrée on the menu, the Tana Sampler, which runs $20/person, comes with your choice of five different meat or vegetarian dishes.

Upon a brief look through of the menu, I was puzzled, as comes naturally with trying new things for me. With dishes like Butech, Ayib Bemitmita and Ye ater Kik Alicha, who wouldn’t be at least a little confused? Sounds more like vocabulary and common phrases from a foreign language than food.

I settled on the Sambusas, pastries filled with lentils, onions, green peppers and herbs for an appetizer. The pair came out moderately quickly and I was quick to eat them. The sambusas had an initial, oily taste, not that I disapproved, with a crisp to them. The oil and lentils seemed to overpower the other ingredients, like they were the runt of the family. There was a bit of spice to the duo, but not enough to slow down eating. Sambusas functioned well as an appetizer, at least for one person – just enough sustenance to put hunger at bay while waiting for the main course.

After I finished the sambusas, the waiter took my order for the main course. The service was slow, but I understood as there seemed to be only my waiter and the hostess tending to the restaurant that could hold about 50.

For my entrée, I chose Misir Wot, split lentils simmered in minced onion in Tana’s seasoned sauces with Kay wot in Berbere sauce. Again, I had not a clue what this was, but my waiter hadn’t led me wrong so far, so why stop now? I chose my two sides: Ye Alesha Gomenz, collared greens, minced onions, garlic and ginger, and Azifa, a cold lentil salad with onions, jalapenos, Tana’s special herb dressing and oil.

When the main course came, I was more than a little surprised. The three dishes were situated on a large plate, with a brown, spong-like bread (Injera) separating the plate and meal. I had also failed to notice the lack of silver ware on the table. It was all finger food here.

Without any sort of tutorial, I worked my way from the outside of the plate inward, tearing off Injera and scooping each of the three dishes, with no real elegant way to eat this meal. 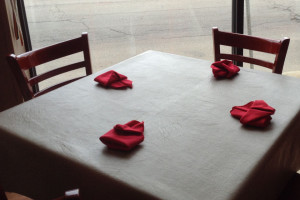 There was a tie between the Misir Wot and Azifa for favorite dish, with being very different dishes. The Misir Wot had delicious lentils and a hint of spice. The Azifa had a fresh taste, being served cold and boasting flavorful ingredients, minus the jalapenos which went undetected.

The Injera was a good medium to eat the minced dishes, the sponginess helped absorb the flavor of the dishes, while the bread itself was mostly tasteless, except for a bit of sour here and there.

As you get near the end of the dish, the injera under the center is soggy. As messy as you think eating Ethiopian could be, it becomes increasingly messier as you work your way inward.

Toward the end, I gave up on eating the three offerings separately and grabbed whatever would fit between the two sides of injera. Use caution, though. Ration your Injera accordingly so you don’t use all of it and have none left for your remaining dish, as is what happened to me.

The waiter offered more injera, but the scraps that remained were unwanted. I was full and it seemed like Ethiopian overkill.

My bill was 16.59 for an appetizer (sambusas) and three dish entrée (misir wot, ye alesha gomenz and azifa). A fair price for a taste from another country, let alone another continent.

Tana is a good meal, for those who have time, with not a whole lot of urgency on giving you your check. So if you have the time, an hour or more, I would recommend it, for a break in the routine eating habits and the sense of peace that comes with eating there.

April 23, 2014 The Duquesne Duke Features Comments Off on Featuring the city: What’s cool in the ‘Burgh

By: Zach Brendza | Features Editor Over the past three years, I’ve had the pleasure of being your Features editor. Throughout my tenure, I’ve experienced a lot of cool things and covered interesting stories for […]