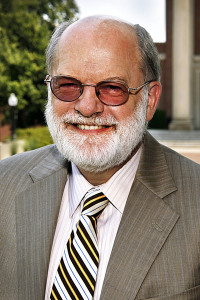 Austin will take over the position on July 15.

“[President Charles J. Dougherty] was very supportive and enthusiastic and said that many different groups had all expressed confidence that I could do the job he felt needed to get done,” Austin said. “I’m always amazed at the willingness of people to put faith in my ability to do this kind of job, and I love doing it.”

Austin left Loyola in 2001 to become dean of the College of Arts and Sciences at Creighton University in Nebraska before taking the job at Holy Cross in 2006.

During his seven years at Holy Cross, Austin simultaneously handled the responsibilities of both dean and vice president for academic affairs. He handled long-range strategic planning, fund raising, rank and tenure decisions, admissions and graduation requirements, appeals of student disciplinary actions, and communications with the board of trustees.

Austin will succeed Ralph Pearson, who held the job for nearly 12 years. Pearson and President Charles J. Dougherty are “in conversation” about whether or not Pearson will return to the classroom as a professor, Dougherty said.

Dougherty also said he is confident Austin can build on Pearson’s many successes.

“[Austin] has a very strong background in Catholic higher education,” Dougherty said. “He has spent his whole career at American Jesuit universities. He has a very strong track record as an exceptional administrator and a very deep commitment to the Catholic character of the University.”

Rev. James McCloskey, chair of the search committee, said the committee looked for a candidate with academic leadership experience at the dean level or higher who “demonstrated a deep understanding and respect for the Catholic and Spiritan character of the University.” Austin displayed these characteristics “without question” during his campus visits, McCloskey said.

“It was clear to us from the feedback we received that Dr. Timothy Austin was very favorably received by each of the groups that interviewed him,” McCloskey said.

The search, which began in September with 75 applicants, concluded last Friday with the committee’s decision to appoint Austin out of three finalists.

Each finalist attended two formal meetings and a dinner with the members of the committee, as well as meetings with the Faculty Senate, Spiritan congregation, associate provost, academic support staff, students and academic program directors, McCloskey said.

McCloskey also said the integrity that Austin demonstrated during visits, along with his “outstanding record and depth of commitment to the mission of the institutions he had served previously,” made him a worthy candidate.

By Andrew Holman | Sports Editor Who’s in? Who’s out? The college football world has been waiting to find that out since the season kicked off on Aug. 26 and that time is rapidly approaching. […]

It will never be “that time of year again”

March 19, 2020 The Duquesne Duke Opinions Comments Off on It will never be “that time of year again”

03/19/2020 By Hallie Lauer | News Editor Bruce Springsteen, in his Broadway show, said, “there’s nothing like being young and leaving someplace.” And while I have to agree with The Boss, I’ve never been good […]