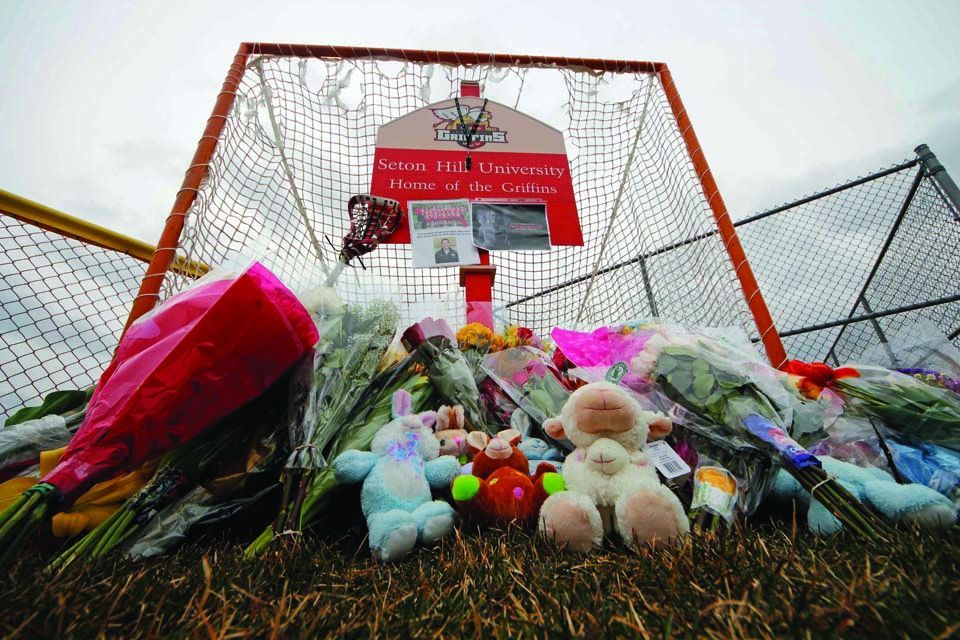 Former Duquesne assistant women’s lacrosse coach and player Kristina Quigley and her unborn son died Saturday morning after a bus carrying the Seton Hill University lacrosse team crashed into a tree off of the Pennsylvania Turnpike.

The accident occurred before 9 a.m., according to Cumberland County authorities. Quigley, 30, of Greensburg, was accompanying the lacrosse team to an afternoon match at Millersville University, approximately 60 miles from where the bus crashed just east of the Carlisle Interchange. She was in her second season as Seton Hill head coach.

The bus driver, Anthony Guaetta, died at the scene, authorities said. The other passengers were taken to nearby hospitals. The bus was carrying 23 people.

Quigley graduated from Duquesne in 2007 with a bachelor’s degree in education, spokeswoman Rose Ravasio said. She also played lacrosse for the Dukes in 2002 and 2003.

Duquesne lacrosse coach Mike Scerbo hired Quigley as an assistant coach for the 2007 season. Scerbo spoke with Quigley weeks before the accident and said she was “doing wonderful” and was “very excited to be starting with the season.”

“She was a wonderful person. She was very energetic, outgoing and enthusiastic,” Scerbo said “She had a wonderful love for her family, her players and coaching lacrosse.”

After one season, Quigley left to start the women’s lacrosse program at Erskine College in Due West, S.C. Erskine athletic director Mark Peeler said Quigley had a “can-do attitude” and a clear vision of what she wanted the lacrosse program to look like when she first interviewed for the position.

Quigley was on her way to becoming a Division I coach, Peeler said.

“I told her, ‘You are going to be a really good coach one day,’” Peeler said. “That unfortunately got cut short. She would have been a rising star in the lacrosse world.”

After a year of recruiting players, Quigley’s first Erskine lacrosse squad took the field in 2009. She left in 2010 for a job at Seton Hill.

One of the lacrosse players whom Quigley coached at Duquesne during the 2006-2007 season said she remembers Quigley “constantly having a smile on her face.”

Caitlin Carducci, then a freshman, said Quigley was an “awesome person.”

“She was honestly one of the nicest people. It’s an honor to have played for her,” Carducci said. “During times like this, the Duquesne lacrosse family comes together.”

Lindsay Muller, a red shirted freshman when Quigley coached at Duquesne, said she recalls Quigley helping her to get through injuries and stay motivated during the year.

“She was a great person, who was always smiling and kept us motivated,” Muller said. “She had such a passion for the sport of lacrosse and it was great to see her touch so many lives through coaching.”

During the 2002-03 school year, Quigley appeared on the Atlantic-10 Commissioner’s Honor Roll under her maiden name, Trionfo. She was the all-time leading scorer at Dundalk High School in Baltimore, MD. She was also named the 2000 and 2001 Baltimore County Division II Player of the Year and the 2001 Dundalk Female Athlete of the Year.

Quigley is survived by her husband, Glenn, and son, Gavin.

Caption: A lacrosse goal serves as a memorial for Seton Hill University women’s lacrosse coach Kristina Quigley on the school’s Greensburg, Pa. campus on Sunday. Quigley and the bus driver were killed when a bus carrying three coaches and members of the Seton Hill women’s lacrosse team crashed before 9 a.m., Saturday morning on the Pennsylvania turnpike, spokeswoman Renee Colborn said.

February 4, 2016 The Duquesne Duke Opinions Comments Off on Give us hoverboards or give us death: Fightin’ for freedom

By: Duke Staff We at The Duke are infuriated by the recent ban of hoverboards on Duquesne’s campus. Hoverboard control is not the answer to recent problems. On Feb. 2, 2016, the university instituted a […]

September 27, 2018 The Duquesne Duke Football, Sports Comments Off on Dukes jump out to early lead, but fall at Hawaii

Adam Lindner | Sports Editor 09/27/2018 The Duquesne football team jumped out to an exciting 14-0 early lead against FBS foe Hawaii on Saturday, Sept. 22, but would eventually fall to the host Rainbow Warriors, […]