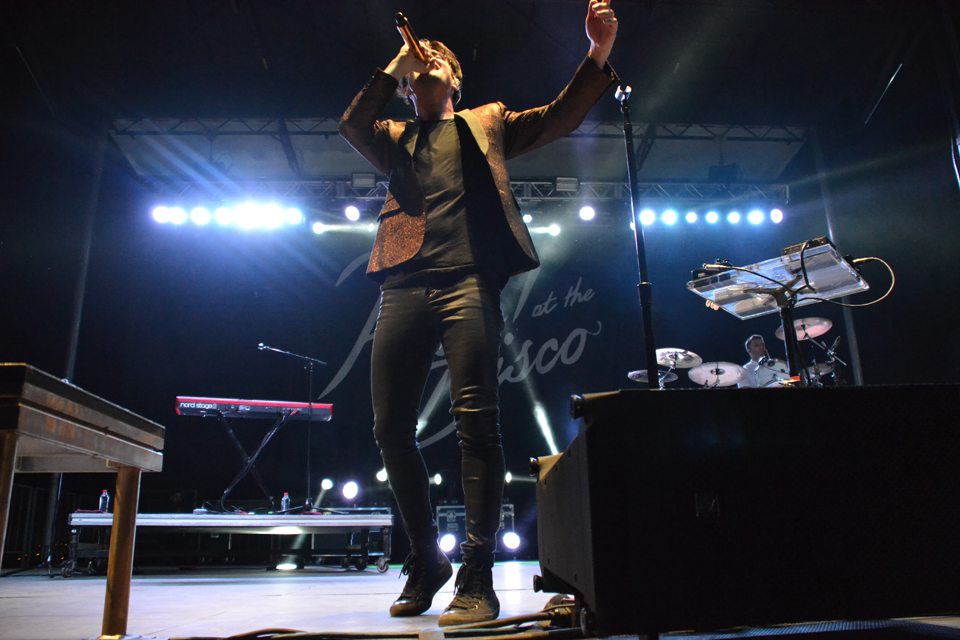 By Julian Routh and Jacob Guerra | The Duquesne Duke

(All Photos by Jacob Guerra)

After a week of events showcasing Pittsburgh’s growing technological and innovative scene, the third annual Thrival Festival shifted its allure to the 178-acre Almono site in Hazelwood this past weekend to host 25 distinguished musical performers on two stages.

The music festival portion of Thrival has grown immensely; in 2013, Frightened Rabbit headlined the lone evening of music in Bakery Square. Last year at the same site, Thrival welcomed 15 artists over two days, including Portugal, The Man, Moby and Phosphorescent.

It felt different this year, and not just because of the shift in location. The performances were more energetic, the festival grounds larger and the atmosphere happier. It could very well be Pittsburgh’s Bonnaroo.

The Duke sent reporters Julian Routh and Jacob Guerra to Hazelwood for two days to review the six biggest acts of the festival. They found that, like Pittsburgh, Thrival is evolving into something special.

Andrew McMahon in the Wilderness

The first night of headliners kicked off with much gusto, centralized in a small space behind a grand piano on the stage. That’s where Andrew McMahon sat – and danced – for most of his hour-long performance, backed by a three-piece supporting cast.

McMahon, who fronted Jack’s Mannequin until 2012, led his new band through a dazzling pop rock set, heavy with piano chords and catchy choruses.

Sporting a white dress shirt and tie, the 33-year-old looked classy and played classy, relying less on physical showmanship and more on musical prowess. His set relied heavily on high-energy dance songs like “Halls” and “Cecilia and the Satellite,” but intertwined soft ballads and simple indie rock tunes.

McMahon gave Jack’s Mannequin fans what they wanted in “Dark Blue,” in which the singer asked, “Have you ever been alone in a crowded room?” Then, he jumped up onto the piano and belted out “Canyon Moon,” the perfect pop rock song.

He finished the set with a rainbow parachute draped around his shoulders, the happiest end to the happiest performance. If McMahon truly is in the wilderness, he should stay there. -JR

It was a tale of two sets for Wale, the Maybach Music Group star whose fourth studio album, “The Album About Nothing,” reached No. 1 in America earlier this year.

The first half of the performance was laden with bass-heavy trap bangers that had the crowd losing its mind. He cycled through “Legendary,” “Bait,” “Chain Music” and “Rotation” while bouncing around the stage, stopping only to high five fans and take photos for Snapchat.

“Grab a girl’s booty, but ask her first,” he said to all the “dudes” in the crowd.

But the set took a turn midway with “The Girls on Drugs” – a soulful R&B tune about women who turn to drug abuse because of emotional issues – and “Spoiled,” a love song straight from the book of J. Cole.

After “The Body” (which is a song “for all the ladies who practice their dancing in front of the mirror”), Wale flexed his vocal muscles on “Lotus Flower Bomb.” Fans sung along to the chorus – “I can teach you all the sounds of love” – which is what Wale surprisingly did at Thrival. -JR

Panic! at the Disco

Instead, the band brought a revitalized electronic sound for its 19-song set, and only one of its original members, frontman Brendon Urie.

To the tune of thousands of screaming teenage girls, Urie made the stage his own personal dance floor for set-starter “Vegas Lights,” a synthpop anthem about nightlife.

He followed it with more dance-pop hits from the band’s 2013 album, “Too Weird to Live, Too Rare to Die!” and a new song called “Hallelujah,” exploring his own spirituality.

But the most spiritual moment of the night was when Urie said the group would play a song they “just wrote backstage before the show,” before launching into an impressive rendition of Queen’s “Bohemian Rhapsody.”

Panic! ended the first night of Thrival with a suiting performance of “I Write Sins Not Tragedies,” just in time for the 10-year anniversary of the band’s debut album, “A Fever You Can’t Sweat Out.”

In a festival celebrating innovation, Panic! at the Disco certainly touted its fresh, innovative sound. -JR

On Thrival’s second day, Canadian singer-songwriter Valerie Anne Poxleitner – better known as Lights – picked up right where Panic! at the Disco left off with a synthpop-heavy set.

Lights, who has been extensively touring in support of her latest album, “Little Machines,” illuminated the vast Almono site with a voice so magical – so overpowering – that it could be heard from Hazelwood Avenue.

While fans shouted flattering compliments (“You’re adorable!”), the 28-year-old played them several songs from the new album, including “Running With the Boys,” a hard-hitting new wave tune.

She also brought the crowd back to 2008 with “The Last Thing on Your Mind,” a beautiful ballad from her self-titled debut EP.

The nine-song set came to an end with the impossibly catchy “Up We Go,” a fan favorite that garnered plenty of cheers.

“From down this low/ It’s only up we go, up we go,” she shouted, leaving the audience wondering if Thrival could actually get any better. -JR

Chants of “Wu-Tang” filled the air as a crowd of fans waited for hip-hop legends Raekwon and Ghostface Killah to come onstage after Lights. The two Bronx rappers emerged – Raekwon with his Steelers shirt and Ghostface with his Yankees jacket.

They performed mostly from Raekwon’s 1995 album “Only Built 4 Cuban Linx,” beginning with the classics “Criminology” and “Ice Cream.” The duo’s vocal deliveries were aggressive and showed no signs of aging.

Between songs, Raekwon spoke on what distinguishes Wu-Tang Clan from others in the rap game today. “We like to talk about life,” he said, “…we take you on a rollercoaster.”

They proceeded to take the audience on an emotional rollercoaster; at one point, Ghostface asked for all the kids to come onstage, where Raekwon gave them a positive message: “Y’all can be whatever you want to be … a doctor, a lawyer, an astronaut, a police officer. You can do all of that and we gon’ support you.” As proof, Ghostface gave the microphone to a young boy, who rapped a verse for the vast crowd in front of him.

After the gesture, the duo performed Ghostface’s “All That I Got Is You” with the kids onstage as a reflection on their own humble beginnings in New York City.

By the end of the performance, the duo had captured both the soft and aggressive sides of the Wu mystique. -JG

After a performance by Raekwon and Ghostface Killah, Manchester Orchestra began the set that would end Thrival on Saturday night. The group was encompassed in blue and white light as Andy Hull, the group’s front man, played the first few notes on his guitar.

They started with “Pride,” a song that’s arguably one of their best live numbers. The distorted guitar chords and thunderous drumming hinted that the festival was about to go out with a bang.

The group continued with a set list that was clearly constructed for the long time fans — though there were a few songs from their 2014 album, “Cope,” most of the material was pulled from their three earlier albums from 2011, 2009 and 2006. This came as a surprise given the enormous “COPE” backdrop behind the band.

They also made sure to play some older hits, including “Shake It Out” and “I’ve Got Friends.”

“I Can Feel A Hot One,” their most popular track on Spotify, seemed to be the only song missing. With the nostalgic feeling that came with the end of the festival, the song would’ve been perfect to capture the mood. Regardless, with their energy and humility, the band proved themselves as the rightful closers to the weekend. -JG

Students join in Clean Up

April 18, 2013 The Duquesne Duke News Comments Off on Students join in Clean Up

By Fred Blauth | Photo Editor On Saturday, Duquesne students, faculty and staff joined the Pittsburgh community for the city’s 24th Annual Spring Clean-Up, where participants helped clean the Hill District and South Side. The […]

By: Shivani Gosai | Opinions Editor This past Sunday, MTV held the annual Video Music Awards hosted by Katy Perry. The show itself was a boring disaster, with no help from Perry’s terrible jokes on […]

Brandon Addeo | News Editor Residents of southwest Pennsylvania can learn if their well water has been contaminated by fracking operations for free — all thanks to a Duquesne professor and his students. John Stolz, […]