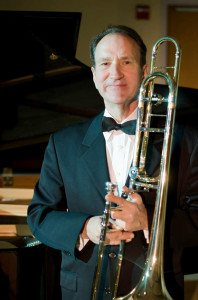 By Carrie Garrison | The Duquesne Duke

After 14 years as dean of the Mary Pappert School of Music, Edward Kocher will step down in May.

Kocher oversaw several changes and renovations to the music school during his tenure. Since his hiring in September 2000, Kocher led efforts to remodel the PNC Recital Hall and Pappert Center, upgrade the school’s music education instruments and technology labs and bring new degree programs.

“During this time we’ve received final approval [from the accrediting body] for our music technology degrees both at the bachelor’s and master’s level,” Kocher said. “We’ve recently added the bachelor’s of music with elective studies in business program.”

Before coming to Duquesne, Kocher was associate dean at DePaul University in Chicago. He is also an active professional trombonist, performing frequently with orchestras and in studios.

The search for Kocher’s replacement is underway and the search committee plans to release potential candidates’ names once members begin interviewing in March. The new dean will be appointed May 1.

“[Dean Kocher is] compassionate, very supportive of faculty and students, an excellent listener, dedicated and hard-working,” Benham said. “He has helped unify the vision and direction of the school.”

As Kocher prepares to step down, he said he looks forward to starting a year-long sabbatical where he will develop courses for students at Duquesne. He was asked by the Honors College to plan a course that will get students involved with performing venues in Pittsburgh. He said he hopes it will attract students from all majors and help to further the next generation of art appreciators.

Originally drawn to Pittsburgh by the “robust academic climate,” Kocher said he enjoys the city and plans to stay here. He plans to return as a professor in fall 2015.

Kocher will leave the dean position with “wonderful memories” of his time on the Bluff. He said he hopes the faculty at the Mary Pappert School of Music will continue their service excellence, warm hospitality and vibrancy.

“I remember fondly rehearsing with brass musicians as part of ‘O Come All Ye Faithful’ at St. Paul Cathedral and hearing the voices and being moved by the choral beauty,” Kocher said. “It’s been so much fun in so many dimensions.”

Recalling his most rewarding experiences at Duquesne, Kocher’s pointed to the diploma recognition ceremonies.

“We typically hear one minute biographies of roughly 65 students of their accomplishments as students and their hopes and dreams and aspirations,” Kocher said. “The diversity of the future possibilities and the optimism and the good feelings that this education has created for me, and for the entire faculty, is very rewarding.”

By Carolyn Conte | The Duquesne Duke In the newly completed Tower at PNC Plaza, one of the greenest office buildings in the world, employees flush the toilets with rain water. As people bustle around […]

By Vince Gullo | Student Columnist 10/5/2017 Imagine living in a world where 9/11 happened every three weeks. It’d be almost inconceivable. What if I told you that we are living in that world right […]

Before the Falcons and Patriots clash on Sunday Feb. 5, The Duke staff gives their predictions and keys to victory for the big game. Atlanta Falcons By Andrew White | Staff Writer How They Got […]