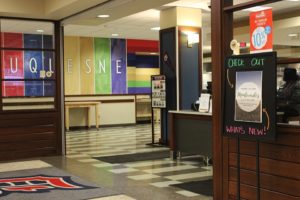 As said by Oscar the Grouch: “I love trash.”

However, the Hogan Dining Center would disagree.

On Thursday, Jan. 17, the Hogan Dining Center weighed food waste between 5 p.m. and 7:30 p.m. According to the Waste-O-Meter posted outside the conveyor belt, there was a total of 123 pounds of waste, which equals 1.89 ounces per person.

The data from Thursday continued a downward trend for waste production at Hogan. Since the weigh-in on Nov. 28, 2017, the total number of wasted pounds dropped from 183 to 123.

Moreover, the total waste-per-person has fluctuated since. These numbers were at a high at the November weigh-in, where it was 2.41 ounces of waste per person, and Apr. 24, 2018, where each person accumulated 2.38 pounds of waste. Thursday’s results stack up well, ranking fourth out of five in terms of least amount of waste per person.

Weighing waste can be an eye-opening study that informs the public how much food we are not using. A 2016 study compiled by The International Food Information Council (IFIC) Foundation found that 30 percent of Americans say that “they don’t create any food waste.”

Additionally, the IFIC Foundation estimates that “40 percent of food produced for our consumption never reaches a human stomach.”

The U.S. Department of Agriculture notes that Americans waste enough food every day to fill a 90,000-seat football stadium. With a seating capacity of 2,200, that’s enough to fill about 41 Rooney Fields.

Additionally, the positives of reducing wasted food are immense, especially from an environmental standpoint.

According to the U.S. Environmental Protection Agency, the benefits of reducing wasted food are that it reduces methane emissions from landfills and lowers your carbon footprint, and that it conserves energy and resources, preventing pollution involved with the growing, transporting, manufacturing and selling of food.

With all the benefits there are of reducing waste, Parkhurst dining makes campus diners aware of how much food is being unused.

Newest ‘30 for 30’ looks back at the catastrophic XFL

February 9, 2017 The Duquesne Duke Sports Comments Off on Newest ‘30 for 30’ looks back at the catastrophic XFL

By Adam Lindner | Asst. Sports Editor In the latest installment of ESPN’s “30 for 30” documentary series, film director Charlie Ebersol takes a look back at perhaps the biggest blunder in the history of […]

Editor-in-Chief wishes campus to strive to do better

April 26, 2018 The Duquesne Duke Opinions Comments Off on Editor-in-Chief wishes campus to strive to do better

Zach Landau | Editor-in-Chief 04/26/2018 I guess the beginning is a better place to start than any. Sophomore year, then-News Editor for The Duquesne Duke Kaye Burnet invited me to write reviews for the paper. […]

By Julian Routh | News Editor The late adjunct whose death prompted outrage was in the early stages of filing a discrimination lawsuit against Duquesne, her attorney said. Documents given to The Duke this week […]