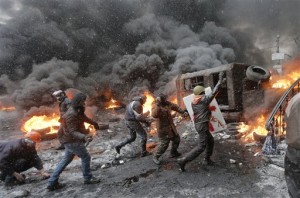 In 1969 Yoko Ono and John Lennon spent their honeymoon in bed to engage in peaceful protest against war and promotion of world peace. After crawling into their hotel bed in Amsterdam, the couple contacted different media outlets. From 9 a.m. to 9 p.m. the couple allowed the press to come into their room and they discussed world peace. This iconic protest was photographed and lives on as a kind of protest performance art.

This peaceful protest can be seen as a representation of the power of the arts. Whether photography, performance art, dance or music, art is a meaningful and an effective means of peaceful protest.

Art can be entertaining, enjoyable and even moving. Markiyan Matsekh, Ukrainian pianist, also uses art as means of peaceful protesting.

Some Ukrainians have chosen to become violent in protest of President Yanukovych’s decision to not form closer ties with the European Union, but Markiyan Matsekh decided to communicate peacefully with the Ukrainian government through piano music. Matsekh has used the power of classical music and has captured the heart of the world. Matsekh’s piano playing continues to be recognized. His peaceful protest has become a YouTube sensation.

The piano was placed in front of police lines and is painted yellow and blue, the colors of the Ukrainian flag. Matsekh plays classical pieces, with no words, and other times he sings songs to build morale among the Ukrainian protestors. It is astonishing that even during these times of chaos, Matsekh is brave enough to share his art. His talents will certainly do some good amidst the violence.

According to Classic FM in their article “Pianist plays Chopin in front of Ukraine riot police”, Matsekh has been playing works by Frederic Chopin, Ukrainian traditional folk songs, and a rendition of Queens ‘We Are the Champions’. He has been playing the piano in protest for several months now.

Ukraine was last independent for a brief time after World War I, since then they have been ruled by foreign powers. Ukraine is divided; “Deeply, deeply divided by language, by history and by politics” according to Max Fisher’s Washington Post article.

Since Nov. 21, protesters have been camped in the middle of Kiev’s main square.They have been protesting President Yanukovych’s decision using both peaceful and violent protesting.

On Jan. 22, the protests grew violent. According to an article written by David Herszenhorn for The New York Times entitled “Unrest Deepens in Ukraine as Protests Turn Deadly,” two protesters were shot and killed during the riots and at least 300 were injured.

“The circumstances of their deaths were murky, but the protesters said that the police had opened fire on them,” according to the same article.

The future for the Ukraine is uncertain and at the current moment ,the end of this political upheaval does not seem to be anytime soon.

Matsekh’s use of classical music in the Ukrainian protests is revolutionary and is to be admired. His decision to protest in a peaceful way should be remembered and revered. It is only through peaceful protest that the Ukraine can hope to find a resolution to their political crisis as their violent methods have not furthered them in the last few months.

It’s unfortunate that many have been injured and killed while protesting the government.  Ukrainian protestors have been wrongfully mistreated by the Ukrainian officials. The power of classical music will hopefully enlighten the Ukrainian government and help them to reach a peaceful conclusion.

AP-  In this Wednesday, Jan. 22, 2014 file photo protesters clash with police in central Kiev, Ukraine. After two months of anti-government protests, modern Ukraine has never been so bitterly polarized. To be sure, Ukraine has long been divided. Russia and Europe have vied for dominance for centuries, causing deep cultural differences between the mostly Ukrainian-speaking western and central regions on the one hand, and the Russian-speaking east and south on the other. But as the crisis has deepened, each side has grown stronger in its convictions, and those who stood in the middle have been forced to choose sides.  (AP Photo/Efrem Lukatsky, file)

Carrie Garrison is a sophomore violin performance major and can be reached at garrisonc@duq.edu.

By Kaye Burnet | The Duquesne Duke More than 1,000 protesters marched down Fifth Avenue from Oakland to the City-County Building on Grant Street Monday to call for an end to police brutality, racism and […]

Staff Editorial – The responsibility of companies during crises

March 17, 2022 The Duquesne Duke Opinions Comments Off on Staff Editorial – The responsibility of companies during crises

by the editorial staff March 17, 2022 As more companies begin to pull their business from Russia in the wake of the Ukrainian invasion, it brings up the question of what corporations’ responsibilities are in […]