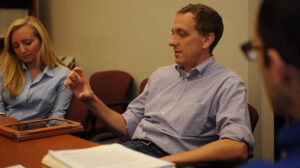 Duquesne is well-known for its many faculty-led research projects that range from the humanities to health sciences, but one commonality of all research is the need for funding. Greg Barnhisel, English professor in the McAnulty College and Graduate School of Liberal Arts, has been awarded a $60,000 fellowship from the National Endowment for the Humanities, his second fellowship in seven years, to support his most recent project.

Barnhisel explained why this particular fellowship is highly coveted and competitive as it provides funding to scholars to complete research and projects associated with their work.

“[The fellowships] give recipients up to 12 months of support to work on a scholarly project, usually a book. They are highly competitive; only about 7% of applicants are funded,” Barnhisel said.

This program is also responsible for a variety of funding outside of scholarly projects.

For the last five years, Barnhisel has been working on a biography of Norman Holmes Pearson, a former professor at Yale University, as he researches the life and impact Pearson had. The Professor Was a Spy: A Biography of Norman Holmes Pearson, American Literary Scholar aims to tell Pearson’s story as well as how he wrote the narrative of the 20th century.

“I’ve been working on this book for about five years now, since I finished my last one. [In] that time, I’ve mostly been laying the groundwork: figuring out all of the major facts and events of his life, identifying where the documents I will need to use are and what people I will need to interview,” Barnhisel said.

Research for a biography of this type requires extensive traveling to the locations where important events occurred and Barnhisel has already spent time gathering information.

“I’ve visited the town where he grew up, the town his parents came from, and the area near Gloucester, Mass. where his ancestors settled in America. And I’ve spent a lot of time at Yale, where his papers are held,” Barnhisel said.

As all of the research that goes into the book must be done on-location, the fellowship will greatly increase the information he can collect and include.

“This is the kind of project that really needs dedicated time because of all of the travel involved. The facts of his life aren’t in published books; they are in his personal papers and the papers of the people that knew him, which are held in archive libraries and can’t be lent out. So I need to actually go there to use them,” Barnhisel said. “Also, it’s important to visit the places where he lived and worked to get a sense of what this life was like, what he would have seen every day.”

The fellowship also provides Barnhisel the opportunity to meet those who knew Pearson best and to observe the items he valued.

“[Pearson’s] surviving step-daughter, who is almost 90, invited me to their weekend house on the Connecticut shore and it was really amazing to be surrounded with all of his things, the art and books that he collected. The fellowship, and the time it gives me to dedicate to this book, literally make it possible for me to write it,” Barnhisel said.

Telling Pearson’s story will shed light on a figure of the 20th century, who was largely behind-the-scenes.

Pearson’s work and life are also the reasons Barnhisel initially became interested in him as he was very prolific in the twentieth century.

“[Pearson] was an important CIA recruiter, and maybe more, in the 1950s,” Barnhisel said. “And he’s also just a fascinating person: He knew and socialized with just about every writer of the time, he came from some of the oldest and most prominent Massachusetts families and then married into one of the richest families in New England, the Winchesters of the gun company … he also had a pretty significant disability in a time when people were happy to discriminate against him because of it.”

Ultimately Barnhisel hopes the biography will open eyes regarding how important Pearson was to the development of American culture in the 20th century and what made it possible.

“I would hope that more people appreciate what Pearson accomplished as a teacher, editor, cultural diplomat, and general behind-the-scenes operator … A biography of Pearson won’t just tell us more about the life of this one extraordinary man, but about how America transformed itself over the first 25 years of the Cold War,” Barnhisel said.