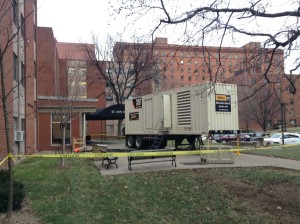 A faulty line under Academic Walk caused a power outage in three residence halls that uprooted over 1,000 students for three days last weekend.

Power went out at St. Ann, St. Martin’s and Assumption Halls at 10:20 a.m. Thursday, resulting in the halls being evacuated by 10 p.m. Thursday and classes being cancelled Friday. The outage was caused by a faulty power line and not a problem with Duquesne’s cogeneration plant, according to spokeswoman Bridget Fare.

The halls were reopened Sunday afternoon while being powered by generators. The power was shut off from 10 a.m. to 1:40 p.m. Monday so repairs could be finished.

Because the outage was caused by a malfunctioning line and not a power source, the University’s backup source, Duquesne Light, could not have corrected the problem because the wire would still have needed to be replaced, Fare said.

President Charles J. Dougherty held a meeting at about 3 p.m. Thursday and decided to close the three halls, according to Director of Residence Life Sharon Oelschlager.

“We came up with the plan to close the buildings because we felt that if the temperature dropped that it would not be safe,” Oelschlager said.

Forty-seven percent of the 1,300 students evacuated have a permanent address within an hour from campus. The remaining students were offered shelter by friends in other residence halls or off-campus, stayed in residence hall lounges or occupied cots in the Student Union Ballroom, Fare said.

The University’s emergency response team evaluated the situation and wanted to “provide the students with a variety of options.”

“They wanted to make sure students didn’t just have the option of leaving campus and travelling back home,” Fare said. “If they had a friend on campus, they could stay with them or they could have Residence Life find a place for them. Or if they wanted to, they could use one of the cots.”

Fare said five of the 80 cots were used by students.

“I don’t actually mind that it happened, but it’s just the way they did it that I don’t really know when we’re going to get it back,” said freshman biochemistry major Angel Ojeda Estevez Thursday night. “They did what they could. It’s kind of like camping.”

Brianna Articolo, a freshman nursing student from Albany, N.Y., said she her only complaint with the University would be the lack of information it provided.

“I think it was fine. I didn’t think anything was that big of a deal,” Articolo said. “I mean, if it had happened in the fall I wouldn’t have had anywhere to go, so it would’ve been nice if they would’ve provided us with something else.”

Some students living in unaffected halls offered to house residents they did not know from the three dorms, Fare said.

“The students were really amazing. They were patient and understanding and we all are very proud of them because we think they showed the spirit of Duquesne,” Fare said. “I know a few students in Des Places took in some students they didn’t know just because it was the right thing and I think that should be commended.”

Dougherty sent an e-mail to the campus community on Monday that reiterated those sentiments.

“Reports from all those who worked directly with our students as well as the images and stories in the local media confirm that our students accepted this dislocation with understanding and good humor throughout,” Dougherty wrote. “The bad news was that Duquesne University lost power for a short time. The good news was that Duquesne University again displayed its core values and overcame the challenges at hand.”

Caption: A generator powers St. Ann Hall Saturday. Assumption, St. Martin’s and St. Ann Halls lost power at about 10:20 a.m. Thursday, causing the halls’ 1,300 residents to be displaced until generators restored power Sunday afternoon. The outage was the result of a faulty power line underneath Academic Walk. Most of the residents who do not live near campus either found shelter with friends in unaffected residence halls or off campus.

By Kaye Burnet | News Editor Some students in Duquesne’s Department of Modern Languages and Literatures believe administrators are turning a deaf ear to their grievances about professors and programs, according to interviews conducted by […]

By David Borne | Staff Writer Trailing 24-7 with 6:57 remaining in the first half, it appeared that Duquesne was about to suffer their second consecutive loss in NEC Conference play to the Bryant Bulldogs. […]

December 7, 2017 The Duquesne Duke Features Comments Off on Merante Brothers Market back as Pittsburgh community staple

12/07/17 By Elsa Buehler | Staff Writer It’s that time of year when the question of whether or not you’re sick of campus dining is needless. Finals are approaching, FLEX is low and you find […]