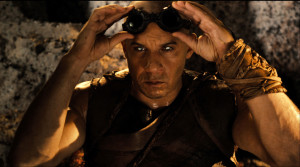 The period following the summer film season is marked not solely by the absence of half a billion dollar budgets, but also a step down in terms of quality.

Last week I reviewed The Frozen Ground, which is a good film with two great performances, but a lack of experimentation with cinematography. The same holds true for Riddick: it has two great performances, competent screenwriting and excellenct design, but elects to be bound by the conventions of its source material, whereas it should have been willing to take a few risks.

I had not seen any of the preceding films of the grungy, science fiction action/horror franchise that Vin Diesel popularized. When I entered the cinema this past weekend, I had no idea what to expect. What I discovered was simple and pleasing. Riddick follows the journey of its title character’s fight for survival on an alien planet, as two teams of bounty hunters come to claim him, upon discovering his distress signal.

The narrative results is a mixture of elements from the films Aliens, Predators, A Boy and His Dog, and the short story The Most Dangerous Game Ever Played in a blender. Each of these narratives are stepping stones in the film’s story: the film takes elements from them to present obstacle’s for Riddick to survive, whether it is the alien life on the planet (the design of which evokes the design of the xenomorphs from Aliens,) the mercenaries, using stealth and traps (recalling scenes from Predators, The Most Dangerous Game Ever Played,) or taming an alien dog to help him survive (similar to that in A Boy and His Dog.)

What these tales and films have in common is the scenario of a lone figure fighting for survival in an inhospitable environment and the film incorporates them neatly. There is nothing new or groundbreaking with the narrative, but the flavors are managed adequately-unique enough so that it does not feel like carbon copying- and keep the viewer on the edge of their seat. The same extends to the mechanical aspects of the film.

There are no memorable sequences from the cinematography, but there are no bad ones either (and no infernal shaky-camera, either.) What stands out is the design of the film. It is a nice division of computer generated imagery and practical effects. Dominating the physical sets is a descendent of the Star Wars aesthetic: a contrast between visually pleasing computer displays and dirty surfaces of cobbled together hardware.

The film has two really good performances First, as expected, is Vin Diesel as Riddick. The narrative tells us that Riddick is one of the most dangerous men alive and Diesel sells it perfectly, considering some of the lines he has to deliver are far from Tom Stoppard quality.

Second is Katee Sackhoff, who portrays the mercenary Dahl. Sackhoff paints the character as a female mirror to Riddick. Dahl is skilled, quick-acting, and refuses to give quarter to the worst of humanity. In one glorious moment in the film, she beats the snot (literally) out of a man who directed misogynistic claims and threats at her. Sackhoff steals every scene she is in, and works well with Diesel, in terms of negotiating the similar and different aspects of their characters. One can hope that she will return for a sequel, as one more film would cement the character as this era of filmmaking’s Ellen Ripley.

Speaking as a newcomer to the franchise and fan of B-movies, I enjoyed it. The film is not intended to be high art, but, invests a lot of care in the design and acting. But, what may be alienating to some viewers is the level of violence in the film: like the Roger Corman sci-fi films of the 1980’s, it is indulgent (for a more recent analogue, think 300.)

Again, while the film is not ground breaking, its competency in the screenwriting and cinematography are beneficial and detrimental to the quality of it. The narrative and camerawork in Riddick rides this fine line of satisfying the minimum requirements and also requiring some bold and unique craftsmanship, where necessary.

Riddick is a good film, when it should have been a really good one.

‘Fate of the Furious’ too big for own good

April 21, 2017 The Duquesne Duke Arts & Entertainment Comments Off on ‘Fate of the Furious’ too big for own good

Liyang Wan | Staff Writer “Furious 7” (Fast 7) was probably the peak of the series, and it was a good point to end. However, some film execs seem to be unsatisfied with this success. Hence, […]