By: Adam Kelly | The Duquesne Duke 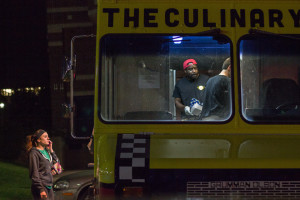 It’s no secret that Duquesne has changed its menu this year for on-campus dining.

Perhaps the most unique food addition for students on campus cannot be found in Towers, the Union or any building for that matter. In fact, this eatery has no permanent location.

The Culinary Cab, a food truck in operation Thursday through Saturday from 9 p.m. to midnight, provides students with all the late-night food their stomachs desire.

“The food truck craze that’s hit cities large and small across the nation has made its way to college and university campuses offering popular street foods,” Grace Hoyer,Manager of Public Rations for OnSite Brands said in an e-mail to The Duke.

“In response to this trend, Parkhurst Dining developed The Culinary Cab mobile culinary concept in 2012.”

Some of the itemss offered include fish tacos, cheese steaks, gyros and Italian sausage sandwiches, according to Hoyer.

This past weekend, The Culinary Cab was parked in the St. Ann’s parking lot near the Vickroy dorm. Students approached the Cab’s window to be greeted by the three enthusiastic workers: John Strong, Stan “The Man” McCarthy and Alex Santomarco.

The students themselves come in spurts throughout the night, according to the workers.

“We’re still learning the business curve.” Strong explains. “They [students] come in groups of four or five and they all order; then five to ten minutes could go by and a whole bunch of them could come.”

Strong also added that the Philly cheese steak seems to be the most popular item, followed closely by the pulled pork barbecue sandwich, evident by the plethora of shelves in the truck stocked with buns.

Public relations major Alexandra Hathorn and business major Gabriella DiGiaobbe are both freshmen living in St. Ann’s, so they decided to take advantage of having a food truck parked outside their front door.

On their first visit to the Culinary Cab, they got the fan favorite, Philly cheese steak.

Not only does the Culinary Cab feature some mouth-watering late night food in a relaxed and friendly atmosphere, but they know how to reach students as well, through social media. The truck’s location on campus (which will change weekly) and other updates can be found on Twitter, under the handle @CulinaryCabPgh, so students can always know where the truck is, according to Strong.

Hathorn and Giaobbe were excited to hear about the Twitter feed and said that they would have to give the Culinary Cab a follow.
“You can’t really get a good philly cheese steak anywhere else, so you got to follow them,” Hathorn said.

Junior Music Technology and Composition major Tony Del Pizzo also had a Philly cheese steak sandwich. He likes The Culinary Cab, just not the hours of operation.
“I think it’s a great idea, it just needs to be open later,” Del Pizzo says.

Del Pizzo raises a good point. With weekend loop buses running all the way until 3 a.m. there is definitely money to be made past its midnight closing, when the later crowd rolls in.

However, as Strong said, they are still learning the business curve. Perhaps in the future The Culinary Cab will be on campus further into the night.
For now, the Culinary Cab can also be enjoyed on A-Walk at all of the Dukes home football games, according to Strong.
So even if you don’t live on campus, you can still enjoy the Culinary Cab while supporting your Dukes. Just follow the great smell that the giant yellow truck next to Rooney Field is emitting.

After scandal, Rice eyes another shot with the NFL

September 22, 2016 The Duquesne Duke Sports Comments Off on After scandal, Rice eyes another shot with the NFL

03/14/2019 By Alexander Wolfe | Staff Columnist  The resolution introduced by Rep. Alexandria Ocasio-Cortez (D-NY) and Sen. Ed Markey (D-MA) has been the subject of national media curiosity for some time since its introduction on […]

December 7, 2017 The Duquesne Duke Features Comments Off on Merante Brothers Market back as Pittsburgh community staple

12/07/17 By Elsa Buehler | Staff Writer It’s that time of year when the question of whether or not you’re sick of campus dining is needless. Finals are approaching, FLEX is low and you find […]