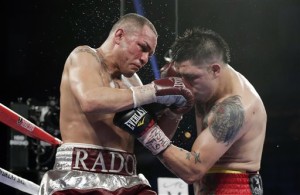 The best rivalries in sports start off respectful, but quickly turn to resentful. What could become the best rivalry in boxing history added another chapter on Saturday.

The main event on HBO “Boxing After Dark” was a junior welterweight clash. Brandon Rios (31-0-1, 22 KOs) faced Mike Alvarado (33-1, 23 KOs). This rivalry has been billed as the next Arturo Gatti vs. Micky Ward and if the first fight is any indication than fight fans are well on their way to seeing that again. The first round was similar to the first fight except that Alvarado was boxing with just a little more caution. That was Alvarado’s adjustment, but Rios’ was a tighter defense. In round two Rios wobbled Alvarado with a stiff jab. The action was non-stop as they continued to trade punches back and forth. In round three it was Alvarado’s turn as he wobbled Rios with a right hook. After round four there was blood coming from a cut over Alvarado’s left eye. The fighters continued to trade punches, but Rios never really stood a chance on the scorecards. Alvarado is a superior tactical boxer and Rios takes too much punishment. Rios needed a knockout by round seven, but Alvarado was not going to fall. The fight was very close throughout, but Rios’ skillset is not suited to win a fight like this. Rios was not able to land combinations because of Alvarado’s slight movements. The fact that both of these men were still standing at the end of twelve rounds speaks to how tough these two fighters are. They went toe-to-toe for twelve hard fought rounds and they both took and gave incredibly fierce punches. The fight went to the scorecards. The judges scored the fight 115-113, 115-113 and 114-113 all for Alvarado. Mike Alvarado won the second fight by unanimous decision.

The first fight on HBO was a junior welterweight matchup. Terence Crawford (20-0, 15 KOs) fought Breidis Prescott (26-5, 20 KOs). Crawford is a slick boxer and he was using his legs and his quick jab to avoid the power of Prescott. Crawford was effective at circling away from his opponent to avoid the straight punches that Prescott was trying to land. Crawford took this fight on short notice as Prescott’s opponent was forced to pull out of the fight due to injury. After an even round one Crawford took over and seemed to be doing enough punching to win rounds. At the end of round five Prescott suffered a cut over his left eye from a head-butt. Crawford continued to dominate the fight and was able to avoid any damage from Prescott. The fight went to the judge’s scorecards and they had it 99-91, 97-93 and 100-90 all for Crawford. Terence Crawford won by unanimous decision.

In a middleweight fight from Monte Carlo, Monaco Gennady Golovkin’s impressive punching power was again on display. Golovkin (26-0, 23 KOs) faced Nobuhiro Ishida (24-9-2, (9 KOs). Golovkin was all over Ishida from the opening bell. In round two a continuous onslaught from Golovkin opened up a cut under Ishida’s right eye. With just under a minute remaining in round three Golovkin connected with a thunderous right hook that sent Ishida down. Ishida’s head got caught in the ropes and it was apparent that he was unconscious and the referee immediately stopped the fight. Gennady Golovkin remained undefeated and defended his titles with a third round knockout.

On NBC Sports Network “Fight Night: Future Stars” the main event was a junior welterweight bout. Issouf Kinda (16-0, 6 KOs) faced Javier Loya (7-2, 6 KOs). In round one Kinda found his range and was able to land punches effectively he was very composed. In round two with only a minute gone by Kinda landed a thunderous right hook that dropped Loya. Loya got to his feet, but was clearly not all the back and it took only a one combination from Kinda for the referee to stop the fight. Issouf Kinda won by second round knockout.

The first fight on NBCSN was a lightweight fight scheduled for six rounds. Karl Dargan (12-0, 6 KOs) faced Ramesis Gil (8-6, 5 KOs). The very first punch of the fight came from Gil and it was a right hook that forced Dargan’s glove to touch the canvas, which forced the referee to call it a knockdown. Dargan recovered nicely and finished out the round strong. Dargan retained control in round two and probably won the round. Dargan’s hand speed and quickness were helping him stay out of danger while landing his own punches. Dargan continued to control the fight and in round four he even staggered Gil. In round five Gil hurt Dargan with a body shot, but Dargan was able to nullify the damage by maneuvering and punching. Gil did good to close the show and possibly win round six. The fight went to the judge’s scorecards after six rounds. The judges scored the fight 58-56 Dargan, 57-56 Gil and 57-56 Dargan.  Karl Dargan remained undefeated with a split decision victory.

This weekend may have given the boxing world the best rivalry in boxing history. The first and second fights have not told us who the better fighters and clearly we will need a third fight.