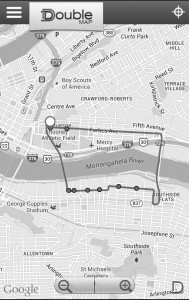 Changes to Duquesne’s loop bus and South Side shuttle are expected to improve safety and make the rides more convenient.

The improvements, instituted by the Student Government Association (SGA) in conjunction with the Pittsburgh Transportation Group, are part of an initiative by the SGA to provide students with better transportation.

According to SGA president Attila Mihalik, the biggest change comes in the form of a free application called DoubleMap, where students can track a bus’ exact location on a virtual map. In addition to real-time tracking, users can view the buses’ stops and routes. All the stops are represented by red dots on the application.

There will also be a tablet on each bus that will serve as a GPS to the bus driver and track the amount of students entering the bus, which will “improve the safety of the busing system,” Mihalik said.

In the future, DoubleMap will feature an announcement-based system and push notifications, which will alert students of possible delays.

“If there is construction or a giant car crash, we will be able to post this on the app,” Mihalik said. “In the past, if a student threw up, or the bus had to go offline, students could not be notified. Now, they can be notified.”

The app, which has been utilized by schools like Xavier and Notre Dame, can be downloaded on both Android and Iphone devices. It can also be accessed on a web browser.

To have the buses run more accurately in accordance to the schedule, the stops have been reworked as well. This will “represent the schedule more effectively,” Mihalik said, which was a complaint among students last year.

Another common complaint last year was bus capacity. Sophomore forensic science and law major Stephanie Kendall, who only rode the loop bus once last year, said “too many people tried to fit on the bus” in her experience.

“The problems I had mostly resulted in that there were way too many people on the bus,” Weber said. “There were so many people squished against one another.”

To address these issues, the size of the buses has increased, making the loop bus the largest capacity bus offered by the Pittsburgh Transportation Group.

SGA Vice President of Finance Nikolas Kouknas said he thinks a lot of the problems students had last year will be fixed, and that DoubleMap will make transportation “easier and more efficient.”

“We are trying to make sure students are making it a safe and positive experience for other riders,” Kouknas said. “Hopefully, they won’t be as frustrated as they used to be.”

The SGA, with support from Fr. Sean Hogan, is also looking into installing cameras on the buses, something that Kouknas said is “99 percent likely” to happen this year.

“For safety purposes, just in case something would happen on the buses, we would want to know what happened,” Kouknas said.

All of the changes brought to the loop bus and South Side shuttle system were paid for by the SGA, according to Mihalik. None of the costs were handled by administration.

“The real goal here is student safety and to make sure it is convenient and easy to use for the students,” Mihalik said. “We have really taken the initiative to accommodate the students and allow them to view the buses real-time as they are moving through their designated routes.”

By Nicolas Jozefczyk | Staff Writer Mesmerizing performances, spectacular singing and, for some reason, nudity sums up the 59th annual Grammy’s. This year’s music award show was a star-studded event, with James Corden adding his […]

04/11/2019 By Duke Staff Student loan debt and the mounting cost of higher education is often the source of self-deprecating jokes and existential woes that plague college students. Students here at Duquesne are no stranger […]

October 27, 2016 The Duquesne Duke Opinions Comments Off on Local government matters on Election Day, too

By Duke Staff  Trump and Clinton, Clinton and Trump. Those names seem to have taken over our country’s consciousness. They follow us everywhere — on TV, in the newspapers, on the lips of everyone to […]