When I think about powerful female role-models, Miley Cyrus is not the first woman that comes to mind. 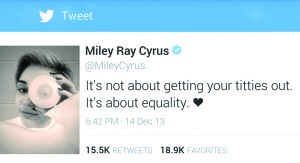 With a few tweets in support of the unreleased film Free the Nipple, the Hannah Montana-gone-Jekyll and Hyde actress has acted as a defibrillator to the Topfreedom movement. Topfreedom is a feminist position that advocates that prohibition of female toplessness is a violation of civil liberties. Miley’s support came in like a wrecking ball, swinging this issue of inequality back into the public forum.

To say that the media storm is all thanks to Miley’s tweets is inaccurate. Numerous groups have been tearing their hair out over this issue for years. While we can’t give Miley Cyrus all of the credit for this topless Party in the U.S.A., it is important to understand the platform on which she is tweeting from. Cyrus is tweeting to #freethenipple, a film which has become a movement.

Intentionally or not, Lina Esco has begun a war on censorship. Her film Free the Nipple which follows a fictitious group of women who decide to be super-hero feminists by exercising their right to toplessly charge the streets of New York City, donning nothing but capes, pink ski masks and pants. The film received an NC-17 rating, a distinction generally reserved for pornography, for its copious amounts of female toplessness. Esco and her team then took to the Internet and started a successful campaign to fund distribution of the film and spread awareness of the absurdity of censorship laws in the United States. The argument being that the female nipple is taboo for unknown reasons while violence and other morally offensive content on cable television is accepted without a second thought.

The campaign against absurd censorship laws has perhaps unintentionally married itself to the Topfreedom movement. #freethenipple has become the celebri-charged activism drive of the season. However, this movement touches on an issue that affects roughly half of the U.S. population.

If you are confused about why a woman would want to be topless in public, think of your own experience. You may be too modest, self-conscious or shy to want be topless in public, some women feel the same way and some do not. If you’re a man, you may be comfortable or proud of your body and appreciate the cool breeze across your chest on a hot summer day. There are some women who would really like to feel that breeze too instead of having to sweat through a bra and shirt. Maybe you’re shy, maybe you’re proud, but even men who aren’t comfortable with their physique will shed their tops at the beach or at the pool.

The point being: wear a top if you’d like to, but not because it’s illegal not to.

The argument against that position is that revealing the female nipple in public is lewd. That the female nipple is somehow different than that of the nipple of a man. It is important to understand that there is very little difference between male and female breasts. Aesthetically and functionally, very little separate the two.

According to an article in Scientific American by Nikhil Swaminathan, breasts are formed during puberty, hormones are released that will either develop the breasts or not.  Boys in puberty will sometimes develop enlarged breasts, though they will regress with time. Further, men beyond puberty can indeed lactate under the right circumstances. Tampering with the hormone prolactin will give men the ability to produce lactic fluid. Men can see enlargement in their breasts by hormonal therapy or by simply gaining weight. 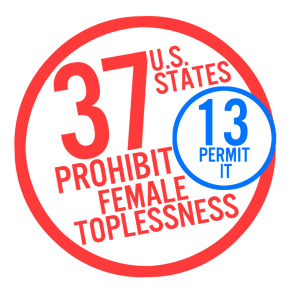 Lewdness is a matter of personal taste. That position is likely derived from the reality that heterosexual males find female breasts sexually attractive. It is unclear why, however. Many will attribute the fascination to biology. One popular explanation comes from Dr. Frank Marlowe, a professor at Cambridge, and his Nubility Hypothesis. He suggests that the permanent enlargement of female breasts serves as a biological indicator to the male of female age and fertility.

It’s a tiny stronghold.Even if one accepts that male attraction to the female breast is entirely biological, that is not sufficient reason for the public prohibition of the female nipple. Just because female breasts may have some biological indication of fertility, so do widened hips, and they are not verboten and morally reprehensible. The strangest part of this all being that it is not complete exposure of the breast that is considered lewd, it is just the nipple. Cleavage and “side-boob” are legal. So, why the female nipple? What is so special about that little bit of flesh?

Inch by inch, somewhat literally, the modern woman has fought to shed the notion that by merely existing, she is a sexual temptation. In the not so distant past, a woman revealing her ankle to a man was considered a sexual act. Over time, those heavy floor-length dresses became yoga pants (which I have been told are the height of all comfort). North of the highwaisted shorts, you wouldn’t look twice at a woman wearing a crop top. However, there has been resistance every step of the way.

Modesty is the social code that it is the personal responsibility of an individual to deflect sexual attraction. In the United States, prohibiting the female nipple is the final relic of modesty enforced by law that discriminates between sexes.

These laws may have a detrimental effect on social growth. This legal discrimination has bled onto social interactions between men and women. Forcing women to be modest, while not placing any restraints on men, creates a clear social divide.

Bringing the nipple to the open on the national level could go a long way to eliminate the illogical gap between men and women. When things become legalized, there is increased social acceptance. We are seeing it now with record-high support of recreational marijuana and increased support of gay marriage as state by state they become legal. We need to see the increased social acceptance of women as equals to men. Though we have made enormous strides over the past 100 years, we are not quite there yet.

The idea of prohibiting the female nipple is ludicrous. There is no defensible reason for it. If topless women become as commonplace as topless men, we will become desensitized to them and it would have the potential to curve the hyper-sexualization of women. To claim that a nipple is morally offensive is the result of a lingering hangover from the standards of a puritanical society and it’s about time we all had some orange juice and toast.

Photo Courtesy of Free the Nipple – Lina Esco Director of “Free the Nipple” poses for a promotional photo in Times Square. In the state of New York, it is legal for women to be topless in public.

November 16, 2017 The Duquesne Duke Arts & Entertainment Comments Off on Branagh turns in stellar performance in ‘Murder on the Orient Express’

Isaac Davies | Staff Writer 11/16/17 Hollywood interpretations of beloved books stand on shaky ground. The director wants to make a great cinematic experience while staying as true to the original work as he can. […]

Vatican must be accountable in light of sexual assault claims

February 28, 2019 The Duquesne Duke Opinions Comments Off on Vatican must be accountable in light of sexual assault claims

2/28/2019 By Timothy Rush | Staff Columnist  On Feb. 22, the Vatican began a four-day meeting of 190 church leaders to address the ongoing issue of sexual abuse within the Church. The meeting was called […]

October 18, 2018 The Duquesne Duke Opinions Comments Off on Wuerl and Francis guilty of inaction; should be held accountable

10/18/2018 By Timothy Rush | Staff Writer On Oct. 12, as part of the tremors left in the wake of the revelations of sexual abuse in the Roman Catholic Church in Pennsylvania over the course […]