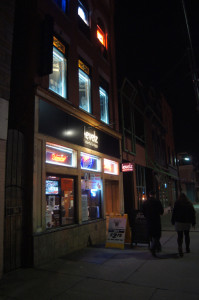 Levelz, a sports lounge at 1825 E. Carson St., on the South Side, has been targeted by the Nuisance Bar Task Force in Pittsburgh in response to recent complaints about its safety.

The Pittsburgh Bureau of Police has contacted the owners of Levelz after a number of fights, noise complaints and violations with the Bureau of Building Inspection (BBI) were reported, according to Detective Duane Schick of the narcotics and vice division of the Pittsburgh Police.

Schick said an establishment is labeled a “nuisance bar” when it contains any number of the following factors: a citizens complaint, a number of police incidents, loud music, patrons blocking the sidewalk, intoxicated patrons, disorderly people, age complaints in accordance with Liquor Control Enforcement, violations of health ordinances and an abundance of violent crime.

Councilman Bruce Kraus has filed to have a hearing with the Pennsylvania Liquor Control Board, along with South Side zone Cmdr. Catherine McNeilly, in regards to the lounge’s liquor license transfer application. If the establishment’s license is permitted to transfer to a new company, it will remain at Levelz with all previous citations erased.

The current license carries a number of violations on it, including service to underage patrons, Kraus said, adding that Levelz “has been chronically problematic for three or four years now.”

“I can’t see of a valid reason that the license needs to be transferred simply because the officers are reorganizing,” Kraus said. “It leads me to believe the transfer is taking place to expunge the record of underage service.”

The owners of Levelz have been cooperative in the process, Schick said.

“They want to comply with everything the city and police are trying to do,” Schick said. “After all, you can’t really control who enters a bar.”

City detectives work with BBI, Liquor Control Enforcement and the fire and health departments to crack down on nuisance bars in the area. In addition to checking state and health regulations, they alert all bar owners that they will be entering the establishment for compliance checks, Schick said.

Addressing the safety of the South Side as an area, Kraus said that “perception often drives reality,” and that if people believe that bad behavior does not result in repercussions, there will be a multitude of problems.

“By retelling the story of East Carson Street, we can actually drive that very customer to the street we want to have there,” Kraus said. “That, in and of itself, would mean we have reduced the problems, reduced the need for additional officers, and reduced the chaos and dysfunctional behavior.”

Schick added that he does not want to label the South Side as a prominent region for nuisance bars, adding that it gets its reputation because it is “the biggest entertainment district.”

“South Side has a lot of bars in a small area,” Schick said. “A lot of patrons run into each other on the streets.”

The prevalence of bars on the South Side has led some to rule out the area as a night spot because of its potential danger. Sophomore secondary education and history major Jake Locke said the South Side is “not necessarily safe” at night.

“I don’t feel safe. I know, and have seen, people who have been jumped on the South Side,” Locke said. “But on a Friday night, if you are smart, you can avoid getting in trouble.”

Junior advertising major Alexa Ryzinski, on the other hand, said she has never had a problem in the South Side, and feels safe because of the amount of cops in the area.

“A lot of it has to do with the fact that it’s notorious for the amount of bars in a college area, which always brings trouble,” Ryzinski said.

By Julian Routh | News Editor The number of liquor law violations on campus increased again in 2012, according to the public safety department’s annual security and fire safety report. There were 460 reported liquor […]