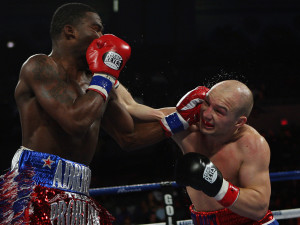 As my car rolled along the Atlantic City Expressway my excitement started to grow. After parking around the corner I walked into Boardwalk Hall. The music was pulsating through the walls and the lights were flashing around the crowd.

The main event on HBO “World Championship Boxing” from Atlantic City, New Jersey was a lightweight matchup. Adrien Broner (26-0, 22 KOs) fought Gavin Rees (37-2-1, 19 KOs). The first thing you notice when you watch Broner is his defensive prowess. He uses a shoulder roll and tries to pick off as many punches as he can with his high right hand. In this fight Broner was much faster and as a result he was able to land when he needed to and counter Rees without getting hit. Broner was slow in the first two rounds trying to feel out Rees who was attacking just as Broner wanted him to. In round two Broner was joking around and had an exaggerated windup on his punch and even though it was pointless it showed just how much control he has in the ring. Rees was able to land a strong right hand just seconds later, though. In round three Broner started to dominate the fight. Rees was gritty though and he was willing to fight all the way until the end. Broner started to land a barrage of punches within the last thirty seconds of the fight. After the round Broner told his corner-man that there would only be two more rounds. A minute into round four Broner set up Rees perfectly. As Broner held Rees with his elbow he used a right uppercut to knockdown Rees. Broner’s punch was incredibly fast and was barely even visible on first glance, but was extremely powerful. Rees made it out of the round, but his trainer warned him he would not let the fight continue much longer. With thirty seconds remaining in round five Broner landed a deadly right body shot just as the fighters were separating and Rees went down. The body shot landed perfectly and clearly above the belt line. Rees got back up, but seconds later his trainer was up on the top step with the white towel. Adrien Broner won by technical knockout.

The co-main event was a super middleweight matchup. Nikola Sjekloca (25-1, 7 KOs) faced Sakio Bika (31-5-2, 21 KOs). Bika was effective from beginning to end. Sjekloca was very slow and was not able to react to Bika’s attack. Bika is a very technical boxer. Bika was able to get his punches off and get out before Sjekloca could respond. Bika appeared to be fighting the best fight of his life, but Sjekloca was making it really easy for him by not throwing punches. Bika was winning each round in dominating fashion. The fight went to the judges’ cards and they had it 119-109, 118-112 and 120-108. Sakio Bika won by unanimous decision.

The last off-TV fight was a light middleweight contest. Demetrious Hopkins (33-2-1, 13 KOs) squared off against Charles Whittaker (39-14-2, 23 KOs). Hopkins is the Nephew of world champion Bernard Hopkins. Whittaker recently lost to Gabriel Rosado. Hopkins was slow to engage, but clearly had enough talent to float by Whittaker. Hopkins was not aggressive and was there to be hit. Hopkins has some flaws in his defense and does not have the offensive abilities to knockout fighters. Hopkins seemed content to just let the rounds go by engaging only enough to score points and win rounds. At the end of round six Whittaker’s corner asked that the fight be stopped because Whittaker had an apparent eye injury. The fight was boring for the fans in attendance. They were continuously booing and were not at all interested in the fight. Demetrious Hopkins won by technical knockout.

The next off-TV fight I was ringside for was a junior lightweight bout. Vincente Escobedo (26-5, 15 KOs) faced Edner Cherry (31-6-2, 17 KOs). Escobedo was coming off of his recent loss to Broner. The fight was back and fourth as both fighters were landing on each other. It was clear that Cherry’s punches were doing more damage. Cherry had stunned Escobedo several times. In round six Cherry landed a left handed body shot followed by a right hook that sent Escobedo down. Escobedo barely beat the ten count. There was little time left, but Cherry moved in quickly. He used the same right hand to send Escobedo down and this time the referee didn’t even bother to count. Edner Cherry, originally of the Bahamas, but now fighting out of Miami, won by knockout.

One of the most exciting bouts of the evening was a bantamweight fight. Three-time Olympian Rau’Shee Warren (3-0, 1 KO) fought Richard Hernandez (0-6). Warren is the right combination of talented. He has speed power and the ability to string his punches together. That combined with the fact that Hernandez had never won a fight made a tremendous mismatch. Warren dominated Hernandez through the first round, wobbling him a few times. In the second round a left hook connected to send Hernandez down. Hernandez got back up, but was put back down with another left inside of the first two minutes of the round. Before Hernandez could return to the action his corner-man was at the top of the steps with a white towel. Rau’Shee Warren won by technical knockout, the first knockout of his career.

The second fight was a lightweight matchup. Prospect Robert Easter Jr. (3-0, 3 KOs) took on Jose Valderrama (2-4, 2 KOs). Valderrama who hasn’t won a fight since 2010 was no match for Easter. Easter was able to open a cut over Valderrama’s left eye. The cut was so bad the fight was stopped. Robert Easter Jr. won by technical knockout.

The first fight of the evening was a light welterweight matchup. Former Olympian Jamel Herring (2-0, 1 KO) faced Carlos Lopez (4-3). Herring used an effective left hand to dissect Lopez. He did more and more damage as the fight wore on. In the third round a left hook to the body hurt Lopez. Lopez tried to recover, but Herring was relentless and started to really do damage to Lopez. The fight was stopped in between rounds. Jamel Herring won by technical knockout.

The main event on ESPN2 Friday Night Fights” was a junior middleweight contest. Delvin Rodriguez (27-6-3, 15 KOs) was up against George Tahdooahnippah (31-1-1, 23 KOs). Tahdooahnippah has only had two fights outside of Oklahoma, while Rodriguez is coming off of a very tough title fight against Austin Trout. After a slow first round Rodriguez started to unload in round two. He hurt Tahdooahnippah badly and had him ready to fall at the end of the round, but the bell rand before Rodriguez could finish him. In between rounds there was some miscommunication and the referee thought the doctor had asked for the fight to be stopped, but everything was sorted out and the fight continued. Rodriguez continued to dominate, but couldn’t close the fight right after he had Tahdooahnippah hurt, maybe partially due to the long break that ensued when the referee tried to sort out whether the fight should be stopped. Rodriguez bloodied Tahdooahnippah’s face and was continuing to do a lot of damage. With thirty seconds to go in round six Rodriguez started to go off and was landing every punch. The referee waved the fight off when it was clear Tahdooahnippah could no longer protect himself. Delvin Rodriguez won by technical knockout. Rodriguez is a good fighter who has a very tough career including some very questionable judging. He deserves at least one more shot to prove himself and even though he probably doesn’t have the talent to overcome a champion he has the heart to last in the fight.

The first fight on ESPN2 was a lightweight contest. Bayan Jargal (17-4-3, 10 KOs) faced Chris Howard (15-2-1, 7 KOs). In the first few rounds both fighters were coming forward and hitting each other a lot. Jargal was able to do just a little bit more damage and winning the rounds. Halfway through round three Howard saw his opening and landed a straight right hand that floored Jargal. Jargal got back up, but clearly did not have his feet under him. The referee waved the fight off as Jargal was clearly too hurt to continue. Chris Howard won by knockout in round three.

This weekend saw everything from spectacular knockouts to upsets to fighters on the comeback trail. The biggest thing to take away from this weekend’s fights is the potential of Broner. He is going to be the best fighter in the world, but until he gets there enjoy the ride.