Student by day, frontman by night: Matt Holden, guitarist/lead singer of the Pittsburgh-Philadelphia-based indie rock band Legs Like Tree Trunks, balances a full-time course load at the University of Pittsburgh, where he is a senior sociology major, with the major task of writing, recording and playing in a cross-state band. 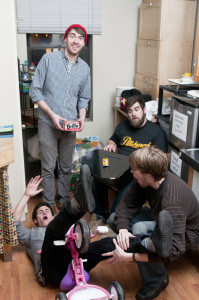 Legs Like Tree Trunks’ members include Matt Holden (top left, guitar/vocals), Dave Cerminara (bottom left, guitar), Dave Shepherd (top right, bass/vocals), Tyler Donaldson (bottom right, drums). Legs has played with the likes of The World Is A Beautiful Place And I Am No Longer Afraid To Die, Modern Baseball, Dikembe, You Blew It!, Adventures and more. Their influences include Algernon Cadwallader, Tera Melos, Paul McCartney and The Strokes.

Legs has two releases, Legs Like Tree Trunks EP and Future Reference, and are set to enter the studio in late June to record their first full length record and are planning to do a US tour in August/September and tour Europe after.

In this issue, Matt sits down with The Duke’s Zach Brendza and talks a little about how Legs came to be and where the future may take them.

ZB: So Legs started with a Craigslist ad?

MH: Summer before my sophomore year [at Pitt], I was learning how to record some stuff on Logic and Dave Shepherd got in touch with me. Met Tyler through another band. Met Dave Cerminara through WPTS live session and he joined the band from there. Originally, looking for a folk rock kind of thing. Like acoustic. Some of the bands I put [in the ad] were like Grizzly Bear, Broke Social Scene, stuff like that. When I first met Dave Shep, he came over with his upright bass. We played acoustic for a few months before we went electric. It was weird because we were going to do an acoustic thing, but I’m glad that it changed.

ZB: You have two releases, your self titled EP and Future Reference, can you talk about those?

MH: First one it was primarily written by me and Dave Shepherd. It was a lot more kind of guitar bass, songs kind of finished. Future Reference [was] kind of a more collaborative process. I think for that reason I like Future Reference better. It was the 4 of us, and not just me. [It’s] More fleshed out. And also Future Reference we did in a real studio. [The] Self titled [album was] recorded at WPTS at Pitt. We recorded at Milkboy Studio in Philly for Future Reference, who have done some Kanye West stuff, some Usher stuff and we also worked with producer Karl Petersen, who won a Grammy for working with Usher, [he also has worked with] Miley Cyrus.

MH: I definitely start most of the songs. Do a lot of demos back and forth. But when we’re together, that’s the only real time we write. It’s tough man. If we lived in the same city, we could put out a new record every few months. It’s always easier when we’re all together. But usually when we’re in the same room together, it comes together quickly… it’s hard but there’s nobody else I’d rather be writing with.

ZB: Can you talk a little about the full length album?

MH: It’s probably going to be 10 tracks, no more than 12. Couple old songs, couple, you know, note-heavy rippers, samba stuff, Latin stuff, some chord based stuff. [There’s] Still a lot of tapping, still a lot of weird time signatures. We really are experimenting on this one. Some songs that sound like old songs, but some songs we’re taking risks on. [We] Kind of have to push the boundaries. If it’s not fun to play, its not fun to listen to. See what interesting stuff we can come up with … I feel like I’m finally writing the songs I want to write. We don’t want to just be an emo or math rock band. We want to go for something more far reaching.

ZB: You’ve lived in Pittsburgh and Philadelphia, which one do you like better?

MH: I like both towns, went to high school in suburbs of Philly. I love Pittsburgh. [I’ve] been exposed to so many cool people, art and stuff. I really can’t answer that, man, ha. It’s a really tough question. I will say this: Pittsburgh has a really great art community now. Pittsburgh does a really great job of investing in the arts, which is really cool.

ZB: Any talks of Legs being a full-time thing?

MH: A lot more of Legs this summer, more tours, longer tours, hitting the West Coast, Europe after that. Trying to really do it. We all had to focus on school and stuff, but we’re going to focus on this for real. Still going to be playing a lot of shows, taking time to write, stuff like that.

This interview has been edited for space.

by: Julian Routh | news editor More than a decade ago, Duquesne graduate Ben Alper was on tour with the Tamburitzans, playing Croatian folk instruments and dancing in front of packed auditoriums across the country. […]

Capri Scarcelli a&e editor 10/01/20 Music is generational; as artistic sound continuously evolves, so does our perception of what constitutes a good album. On Sept. 22, The Rolling Stone revamped their beloved “500 Greatest Albums […]

Capri Scarcelli | a&e editor 3/4/21 Brittany Trotter, an adjunct professor at Duquesne, has joined with Black teaching artists in the Pittsburgh area to implement Unisound, a music program and database targeted to young, aspiring […]