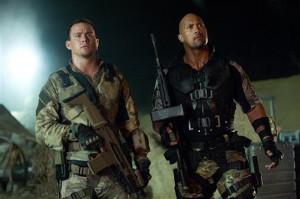 G.I. Joe: Retaliation is the cinematic equivalent of a McDonald’s sandwich: offensive to refined palates, but a mass of greasy enjoyment and repulsion to the rest.

The film follows the Joes fighting Cobra from nuking in the world, after being betrayed by the American Government.

As the summary indicates, the architecture of the narrative is simple and mass-manufactured by the studios, like the aforementioned sandwich from McDonald’s. But, the creative team made a few bold decisions that cause the film to stand out ever slightly from its peers. One of the decisions was to kill off one of the primary characters in the first reel of the film. Normally, I have mixed feelings about the Game of Thrones standard of writing: when in disciplined hands such as those of George R. R. Martin, it works well and keeps the story fresh; but, in failed applications (such as the graphic novel Ultimatum) it robs the narrative of emotional impact. But, in G.I. Joe Retaliation, it works, as the characters operate in a wartime setting, and it is natural that even the most hardened and experienced of them would be as vulnerable as the barely seasoned addition to the team. In addition to establishing tension, the film delivers on its promise: like Alderaan in Star Wars, a certain European city becomes the victim of a nuclear strike, which reinforces the urgency of stopping Cobra.

Bringing this narrative to life is a team of actors. Gone are Joseph Gorcon Levitt and Christopher Eccleston from the preceding film; Cobra Commander has been replaced with Luke Bracey, while Eccleston’s character (Destro) was replaced with a different performer. Of the Joes, Channing Tatum returns, and performs alongside newcomers Adrianne Palicki and Dwayne “the Rock” Johnson, and Bruce Willis. Willis has some terrific moments during the final battle, his earlier scenes are crafted to reference one of his films, Red. While I appreciate the tribute to the film, it ended up alienating me from the film and wanting to watch it, instead (perhaps they could rope in Karl Urban for the next G. I. Joe film?) Palicki and Johnson handle their individual scenes well, in addition to those with their other onscreen teammate, played by D.J. Cotrona.

In terms of the onscreen mechanics, the cinematography is standard, without any remarkable shots; and after all of the horrible shaky-cam entries I have had to review, it is refreshing to see a film that does not descend to it, even it does not try to elevate the bar, either. The same could be said of the score: it is not bad, but not great, either; this is important, because it is scored by Henry Jackman, whose score for X-Men: First Class is one of the best soundtracks of the millennium. Beneath the camerawork and score are some terrific action set-pieces. At times the editing makes keeping track of all of the players difficult, but on the whole, it is the same quality as the music and cinematography.

G.I. Joe: Retaliation is an honest blockbuster in the tradition of Michael Bay. If one likes his work, then this film will be a fine way to spend an afternoon viewing.