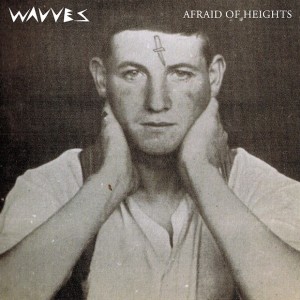 A lot of surf rock and beachy sounding bands come out of California. But that’s only the half of Wavves sounds.

“Sail To The Sun” starts the album, but take caution, as bells and a peaceful intro lead the listener into a false state of what’s to come. At the 40-second mark, a ripping bass line comes in and “I don’t wanna / get left behind “ is sung by Frontman Nathan Williams, making his first vocal appearance on the record. The song accelerates into a fast paced grungy punk  jam-a-long, ending with onomatopoeia-esque vocals that  slightly resemble something that would be sung by Foster the People.

And the almost 42 minutes, 13 tracks of Afraid of Heights has begun.

Wavves’ sound isn’t necessarily unique, not many things actually are. But they are their own, with elements of surf, noise, maybe even indie rock, with a hint of punk thrown in. That’s their recipe. Serve chilled in the summer time.

But Williams’ vocals are also an intricate part to this mix, but are hard to put a finger on. They have a sense of ‘90s grunge or something to them. But it’s a constant battle of whether or not they fit with the music. It’s really a musical Odd Couple, these grungy lyrics with surf rock. It’s weird.

“Demon to Lean On” is next, with an acoustic start with some electronic things going on, eventually going into an infectious chorus of “holdin’ a gun to my head,” which is an incredibly profound phrase to be so catchy. “Mystic” follows with a bass heavy intro, sounding like Animal Collective (almost), with some noise behind it. A series of claps add some depth to a similar sounding album.

“Lunge Forward” has a cool drum fill 30 seconds in, which is a good change of pace, from the similar, if not same, drum beat used throughout the album. ”Dog” has an intriguing bass line that stands out, with acoustic guitar and stringed instruments, the songs stands out for those that preceded.

From this point in the album, only a handful of the eight remaining songs vary in sound.

“Afraid of Heights” begins with a four second drum fill starts, a simple differentiation in sound from other tracks, and ends with a panning between headphones that sounds mysterious uneasy and  even strange.

“Cop” and “Gimme a Knife” features samples of children talking. On “Cop,”  “I’m about to kill somebody” is said by a child while “Don’t you ever ever in your life go to California and get shot” is yelled by another child on “Gimme A Knife.” These samples don’t exactly make sense to the songs they’re in, but are there regardless.

“Everything is My Fault” begins somber with acoustic guitar coupled with sound samples / noise,  sounding somewhat Radiohead-esque. Williams’ differentiation of vocals are appreciated and the song is a needed change of pace from the rest of the album, as well as one of its best songs.

“I Can’t Dream” is Afraid Of Height’s send-off, with a  weird, ominous carnival like sample / noises start the song, with Williams singing “I don’t want to remember anything”  “I can’t dream, / I can’t dream,” which leads out into pretty ambient noise.

The point to be made about Afraid Of Heights is this: if you like Wavves, you will most likely enjoy it. If you don’t like Wavves, a second or even third listen will improve your judgments. It seems to be one of those albums.

Afraid Of Heights is a good album. Good, not great. But it is worthy of your time. At least for one spin.