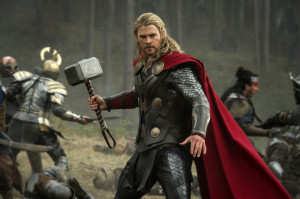 Director Martin Scorsese said that young filmmakers should “study the old masters, enrich your palette, expand your canvas. There’s always so much more to learn.”

This principle – studying what has been done and why it worked – is present in the newest Marvel film, Thor: The Dark World, released Friday.

While the film by director Alan Taylor does not reflect paintings from antiquity, it is built upon two rich traditions: science fiction and sword and sorcery fantasy, with a supplement of the spaghetti western. All of these influences result in the most visually unique film released by Marvel Studios.

Thor: The Dark World, released Friday, is set in the aftermath of The Avengers. While Loki (Tom Hiddleston) is being tried for his crimes, the Dark Elves (led by Christopher Eccleston) emerge from suspended animation, and set out to make the universe theirs once more. Their campaign is waged when the stars are literally perfectly aligned. Without divulging more, it is safe to say that the premises recalls the dark fantasy work by H.P. Lovecraft and Nigel Kneale, both of which have been considerably underrepresented in cinema, lately.

Bringing this cosmic tale of war and redemption to life is a cast consisting of performers from Thor, with a few new additions. The focus of the film lies primarily on Thor’s troubled relationship with his half-brother, Loki. Both Hiddleston and Hemsworth steal every scene in which they appear in. What enriches their performances is that they are built upon a classic cinematic model: the relationship between Tuco (Eli Wallach) and Blondie (Clint Eastwood) from The Good, the Bad, and the Ugly. Both of these relationships are built on violent tectonic plates that shift from friendly to enemy at any given moments, thus leaving the audience unable to trust the trickster (Loki/Tuco.)

Thor: The Dark World is a beautiful film, from the perspective of design, color correction and visual effects. It achieves this by negotiating elements from preceding science fiction and sword and sorcery fantasy. For instance, the armor and space vessels of the Dark Elves is a satisfying blend of the work of artist H.R. Giger (who designed the space craft and creature in Alien,) and the production team of Return of the King (more specifically, their work on Mouth of Sauron and Black Gate of Mordor.)

This blending of science fiction and fantasy designs also extends into Asgard: the designers retained the fantasy tech derived from the artwork of Thor co-creator Jack Kirby, but added elements from sword and fantasy: the lighting and design of Asgard captures the mystery and beauty from King’s Landing on Game of Thrones, which Taylor directed before Thor: The Dark World. What is most striking is Svartalfheim, the destroyed home of the Dark Elves. Taylor refracted the nautical staple of a ship graveyard through the lens of science fiction, and created an ash-choked planet that is littered with broken starships.

The film, while visually appealing, does have its flaws. First, the humor in the film is occasionally overdone, thus undercutting the dramatic tension of a scene. While I know that the Marvel brand is associated with humor, there were a few scenes that could have been fine without a one-liner.

Secondly, Natalie Portman’s character lacked the vitality she had in the first Thor film. Determining the cause is impossible; it could be the editing, writing, direction, all, or none of the above. In each individual scene, Portman is fine, but when assembled together, they are missing some of the finish that is present in the preceding film. So, my criticism is not a reflection of her performance, but the material that she was supplied with.

My final criticism is a small one: the score. The music for Marvel Studios’ films has either been a hit (The Avengers) or standard (The Incredible Hulk). Sadly, Thor: The Dark World is the latter. Unlike previous superhero films – say The Dark Knight Rises – I did not walk away humming one of the suites, let alone remembered any of them. That is not to say that it is bad; it is that the score fulfills its purpose, but does not deliver anything memorable, which is a shame. One would have expected a film dealing with a villain trying to destroy reality would have been marked with an impressive score (see Murray Gold’s work for Doctor Who: The End of Time.)