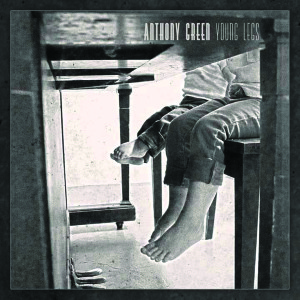 By: Greg Perciavalle | The Duquesne Duke

Circa Survive’s famed frontman Anthony Green returns for his third solo album, Young Legs, released Tuesday. On the album, Green is backed by the instrumentation of his fellow Circa Survive guitar player Brendan Ekstrom and all three members of the indie trio Good Old War.

This time around, Green’s sound moves beautifully forward, featuring the somber solemnity of his first release Avalon, and the angst of his second release, Beautiful Things, blended in this case to find a slowly churning, swelling album that absolutely bristles with an obvious and heavy emotional weight.

All 11 songs on Young Legs maintain a similar sound, with slight variations that call to mind a true, sought after “album experience,” where many of these songs flow into the next and feature subtle variations that complement the previous track well.

The pacing here is phenomenal; songs have highs and lows, building and swelling with thick instrumentation on tracks like “Breaker” and “Young Legs” that ring in the album with a tense atmosphere. Even through the dense sounds, there is still plenty of room for Green’s distinct voice to garner attention, despite his somewhat “reeled in” performance. Places where he may have let songs explode with sky high-pitched notes are instead kept more reserved, his voice in what is perhaps its lowest ever recorded octave (excluding harmonies, cleverly pushed to the back of songs like “Breaker” where he still finds room to wail). More than anything, he sounds matured and refined, abandoning old techniques that showcased his immense vocal range, but now just seem like some old gimmick.

The lyrical content and overall mood of these songs has been carefully crafted to evoke a subtle melancholy and a small pang of loss that is not without its moments of upbeat clarity. The songs, Green claims, were written in the perspective of various people he has encountered in his life and their reactions to things like divorce on the bittersweet track “You Have To Believe It Will Happen,” and the untimely death of best friends on the downright heartbreaking song “I’ll Miss You”.

“Conversation Piece” is one of the most catchy and painfully earnest songs on the album, only Green and his guitar, singing about something lost, maybe love of a significant other: “everything that’s made me want you in the first place is what’s driving me away.” His songs are a nostalgic trip into poignant memories, with titles like “I’ll Miss You,” and “When You Sang To Me.” The consistent use of keys throughout the album, newly introduced, as well as the violin featured in “I’ll Miss You,” aids in lending the album an ethereal air that compliments the guitars, sometimes lilting in and out, and sometimes producing enormous walls of sound. Sparse electronic sampling coincides miraculously well with the thick instrumentation and Green’s well executed hooks, resulting in songs that are catchy, memorable and by no means antiquated: in only two or three full listens of Young Legs, songs are unmistakable and easily identified by name.

Considering the moodiness of Young Legs, an accurate claim could be made that the line between Green’s solo work and his work with Circa Survive is now more blurred than ever. Many songs on this release could easily find themselves at home on Circa Survive’s latest 2011 release Violent Waves, a dark and atmospheric record that featured a great deal of progressive rock influence, traces of which are perceptible here as well. Both were self produced by Green and the band respectively, which undoubtedly had much to do with the similarities in sound. In spite of this, a keen ear will notice the differences that having Good Old War as a backing band can provide, such as the impromptu reggae break on “Breaker,” and a generally simpler approach to songwriting.

Young Legs is a strong release, original and unique in sound that deserves multiple listens, but will undoubtedly get them without much begging, as it is one of Anthony Green’s most accessible releases to date.