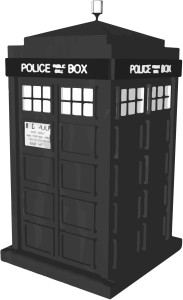 It is 2013, barely shy of half-a-century since The Beatles hopped the pond to New York and redefined the way Americans listen to music. The United Kingdom has again created a product that will redefine how Americans entertain themselves.

The British Broadcasting Corporation, commonly referred to as the BBC, has been airing television content that, quite frankly, puts most of American produced television programming to shame.

You may already be familiar with some of the more popular BBC shows, like the long-running sci-fi hit Doctor Who or the modern adaptation of the works of Sir Arthur Conan Doyle in Sherlock. These primetime hits are indicative of how BBC produced dramatic television which is raising the bar for TV entertainment globally. It is apparent that there is a labor of love involved with this new wave of British television and one should consider giving these programs their attention instead of the underachieving menagerie of American network television.

No, not all American television is atrocious. The saving grace comes from networks like AMC and FX who produce excellent shows such as The Walking Dead, Mad Men and American Horror Story. However, the flagship of American television, HBO is the only fairly consistent producer of high-quality, well-written, cinematic television content. Shows like Game of Thrones and The Newsroom have set the bar for American television. Current television mega-hit, Game of Thrones has logged a season high viewership up to 13.6 million, which only ranks second to The Sopranos in the history of the network.  However, HBO’s future is uncertain as popular internet television subscription service Netflix has begun to produce original, high-quality content like House of Cards at a fraction of the cost to the subscriber.

American television networks are in trouble. The big cable networks are wading in a state of predictable cliff-hangers, less than subtle innuendoes, overall poor writing and ratings grabbing guest appearances from celebrities, and the premium American television stations are struggling to adapt to the exodus of viewers to Netflix.

Netflix is providing their rapidly growing U.S. audience, 25.1 million subscribers, with an easy avenue to watch international programming. You can watch everything Netflix has to offer on your iPad for $7.99 a month, and that includes the newest content from the BBC (which has its own featured category on the site.) Unfortunately for HBO, across the pond, they have rapidly stepped up their game.

The increased popularity of the BBC is not some random quirk. BBC dramas have characters and stories that have significantly more depth than shows commonly produced on American television. It’s almost as if American networks do not trust their viewers to keep watching, so they cram as much in-your-face storytelling as they can in 30 minutes. Cinematographically, BBC dramas are cutting edge. There is an artistic push there that is almost entirely absent in American television.

If you have no interest in catching up on whatever Charlie Sheen is starring in, nor in whatever poorly written primetime show is on CBS, you ought to consider checking out a BBC series on BBC America or Netflix. The characters and story will have you watching episode after episode, so it is probably best to start at a downturn in your schedule.

Nearing the 50th anniversary of its first episode, cult-classic Doctor Who is a must watch. Even those who are not fans of sci-fi will find themselves entranced by the Doctor’s adventures through time and space. While Doctor Who is a show about aliens, spaceships and time traveling to visit Winston Churchill, it is so much more than just that. The television series is a sociological examination of the human race from the perspective of a non-human (or half-human, if you are familiar with the canon) who has been visiting Earth for nearly 1,000 years. You will be hard-pressed to find another show that can accomplish what Doctor Who has been doing masterfully for half of a century.

On Aug. 4, the BBC aired a special broadcast to announce the casting change in the leading role of Doctor Who; the Doctor has been played by 11 different actors to date. Doctor Who Live was the #1 non-sports telecast in the United States that day and six of the 10 worldwide trending Twitter topics during the announcement of the 12th Doctor were Who related. At the end of the broadcast, BBC America reported that this was their second highest rated non-primetime show; it was only beat out by The Royal Wedding broadcast.

BBC shows have a very dedicated fandom.  However, perhaps the most diehard supporters come from the show Sherlock.  While Moffat’s modern adaptation of Sherlock Holmes may not be the only one on television, it is by far the best. Benedict Cumberbatch has launched into stardom from his masterful portrayal of Holmes.  Cumberbatch’s Holmes is perfect.  On screen, he is quirky to the point of being bizarre and introverted to the point of outlandish rudeness.  No actor has yet to capture the brilliant detective this way.  Sherlock, even with modernization, still follows the works of Sir Arthur Conan Doyle respectably well.  Cumberbatch provides a compelling enough performance to convince viewers to stay put during an entire 90 minute episode.  However, Sherlock’s Holmes is matched by an equally impressive Watson, played by Martin Freeman.  Freeman plays a down-to-Earth Watson that is the perfect foil to the eccentric Holmes.  This casting, produced by Moffat and Mark Gatniss, will guaranteed to leave you wanting more.

It’s Sunday afternoon and you’re about to delve into a six-hour marathon of Law & Order.  Stop.  Don’t do it… again.  After watching a few episodes of any spinoff of the iconic American franchise, you can script with fairly decent accuracy a minute-by-minute schedule of arrests, incorrect suspects, evidence being thrown out, and an anti-climactic verdict.  The number of crime-dramas in America is staggering.  Each attempt to refresh the genre on network television seems to be more awful than the last.  The genre needs a cultural kick in the head.  The BBC has taken that tired genre and found a new way to spin that .  If you find yourself captivated by the tenuous and monotonous story telling of Law & Order,  you won’t need the promise of a wasted Sunday afternoon in sweatpants to get you to keep watching Luther.  In a Golden Globe winning performance, Idris Elba plays Detective Chief Inspector John Luther, a London detective trying to repair his life and sanity after spending a career as a brilliant, but dangerous loose cannon.  He is a department legend, which makes him a hero and a target.  Also, he has a murderous psychopath as his sidekick.  Luther has expert cinematography.  There are artistic shot techniques that even a casual viewer is sure to appreciate.  Luther certainly has that addictive quality that American crime dramas possess.  So you may still be spending your Sunday afternoon in sweatpants, but you will definitely regret it less.

Doctor Who, Sherlock, and Luther can all be found on Netflix Instant Play.

Doctor Who will air its 50th anniversary special on November 23.  Who will also bid farewell to current lead actor Matt Smith and introduce Peter Capaldi as the 12th incarnation of the Doctor in their Christmas special to be aired on Christmas day.  The 8th season of Who featuring Capaldi as the new Doctor is expected to begin production in 2014 and air later that year.

Sherlock is currently in production of its third season and is expected for release sometime in 2014.

Luther recently finished its third season in the UK and will air on BBC America on Tuesday, September 3.  It has been widely reported that the script for a film adaptation of Luther has now been completed.

The BBC has a wide range of truly excellent programs. The continuing drama series have surpassed anything you will find produced in the United States. Instead of tuning in to the Big Bang Theory, try something new and get on your netflix account and experience real television. The British know what is going on when it comes to entertainment. BBC creates shows that will bring more entertainment than any other American sitcom.

February 20, 2020 The Duquesne Duke Arts & Entertainment Comments Off on Travel back in time: The best Doctor Who stories of all time

Ollie Gratzinger | Editor-in-Chief 02/20/20 A chilling new episode of Doctor Who hit the screen on Sunday night with “The Haunting of Villa Diodati,” featuring the return of a classic villain — the Cybermen. This […]

By Duke Staff As the 2014 Olympic Winter games continues to captivate the world, the way in which we root for our favorite teams or athletes has changed due to media outlets’ take on the […]

By Zachary Landau | Asst. A&E Editor What has happened to “Sherlock?” Seven years ago, the show was a breakout hit and immediately garnered praise from both critics and the public. It was slick and […]