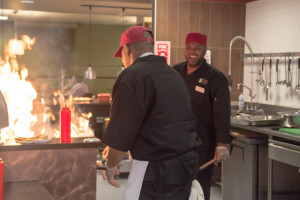 Parkhurst, a division of Eat’n Park Hospitality Group, began food operations when Aramark’s contract with the University expired on Aug. 7. Duquesne notified Aramark 90 days before their contract expired that they would no longer be the University’s food service provider.

According to Duquesne spokeswoman Bridget Fare, the University chose Parkhurst because of their fresh “made-to-order, made-from-scratch” approach to food preparation, something that she believes students want.

“We think that Parkhurst has a good array of new and fresh foods that will make the student dining experience more what they are hoping for,” Fare said.

The change came after students expressed dissatisfaction with Aramark’s service, according to executive director of auxiliary services David DiPetro. Students indicated in surveys that they were not satisfied with a number of things including the attitude of the staff and the selection of food, DiPetro said.

“It was time for a change,” DiPetro said. “It was time to give students at Duquesne something fresh and new.”

Even with the change in vendors, Duquesne did not change the cost of meal plans, although changes to room and board costs each year are not dependent on food providers, according to Fare.

“The switch in food service providers will not have any economic impact on the university since Parkhurst assumes all of Aramark’s responsibilities and obligations,” Fare said.

“The new management seems very open-minded and interested in listening to students’ opinions,” Mihalik said. “Ultimately, Parkhurst seems to be doing a great job, but we will need to see how Duquesne students enjoy it.”

DiPetro said students should be excited about the switch in providers because Parkhurst’s ratings on other campuses are high amongst students.

“Parkhurst has a whole different attitude towards feeding students,” DiPetro said. “It’s not only that the food is fresh, but the training of the people is fresh.”

In result of the change in food providers, there are a handful of other new food options available on campus this year.

Freshens, a smoothie company, is set to open in October, taking the place of the Jamba Juice on Forbes Avenue. It will offer a variety of healthy options, including smoothies, handcrafted crepes and frozen yogurt.

For those looking for an alternative to Starbucks, a new coffee shop, The Coffee Tree Roasters, can now be found in the Law School and Rockwell Hall.

Changes to the Red Ring Bar and Grill, including new patio seating and a refreshed menu, will also be initiated soon, DiPetro said.

Food on wheels will also be an option this year, as The Culinary Cab will operate at night Thursday through Saturday.

Pittsburgh featured as an “innovation city” in Brookings report

September 28, 2017 The Duquesne Duke News Comments Off on Pittsburgh featured as an “innovation city” in Brookings report

Alex Wolfe | Staff Writer 09/28/17 It seems like Pittsburgh is becoming more and more of a popular place to work, according to a report published by the Brookings Institute. Brookings named Pittsburgh as a […]

By Bridget Seelinger | Student Columnist  Protestors and demonstrators across the nation accused the Western Pennsylvania School for the Deaf of launching a direct attack against the deaf community and American Sign Language. What started […]

Hallie Lauer | Staff Writer For the second year, Duquesne will be honoring service members on campus for Veteran’s Day. Veterans Week is a celebration honoring the approximately 250 to 300 veterans and active duty […]