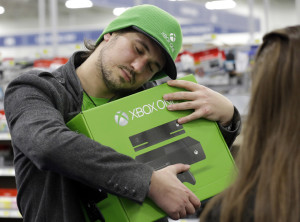 The Xbox One, released Nov. 22, did not sell as well as the PlayStation 4, but it has edges over the PS4 in certain areas that will make it an attractive choice for years to come.

The console has focused on taking over living rooms all over the world and puts everything in one place so that people never have to fuss with remotes or cables. The Xbox One allows the owner to plug in an HDMI input, so that they can watch TV and seamlessly switch to a game or their favorite app, most of which are free. The load times are better on the Xbox and the initial setup is much faster, which allows owners to make use of their console right away.

The new console makes better use of a more powerful camera/microphone than the PS4 version with the Kinect. The Kinect allows the player to give verbal commands that can allow for even easier transitions from one application to another. It also gives the gamer the option to record play without having to stop playing. The player simply says “Xbox, record that,” and the Xbox uses the Upload app to record the previous 30 seconds of gameplay and upload them so that all of the players friends can see on Facebook or Twitter.

For being the less pure gaming console based on the lower graphics capabilities, Xbox really delivers. The graphics are only slightly worse and it is only noticeable right now in games made exclusively for the PS4 although that will change as the games catch-up to the technology.

The Xbox controller is only slightly modified, but the improvements make a big difference. The bulky battery pack on the back is gone replaced by battery casing built into the controller, which is a huge relief for gamers. Another major improvement to the controller is the joysticks. They are sturdier and the ribbed edge improves the grip for precise movement. The triggers have been improved, as well, and can now be pulled with different amounts of pressure similar to a gas pedal in a car. They are not a simple button any more.

One of my favorite things to do with the Xbox One is to watch the Redzone channel on Sundays with the NFL app Snapped, meaning that I can put it in a small separate box on the side of the screen, so that I can keep an eye on my fantasy matchups. I also enjoy Snapping the Internet Explorer app during a movie to remember where I have seen a familiar actor before. The Xbox remembers my favorite channels so that after I finish my movie I can say “Xbox, watch ESPN” to catch all the highlights on SportsCenter.

One of the biggest flaws for the Xbox One is the game selection. PlayStation has had the advantage in exclusive games for a while and the new console launch was proof of this. PlayStation 4 had Killzone, a highly anticipated first-person shooter. There were a few other big games for PlayStation on launch, while Xbox only had two major games. The first, Dead Rising 3, is an above average zombie slaying game that, while fun to play, lacks any real depth or a quality story. Ryse: Son of Rome, the other major Xbox exclusive, was an overhyped flop that has not been received well.

Other flaws for the Xbox One, while minor, could cost the console in the long run. The controller edge has to go to the PS4 because while the Xbox controller is good, it does not have a counter for the limitless touchpad on the PlayStation controller. The final drawback, while true on the PlayStation as well, is disappointing. Many of the apps that were fan favorites on the Xbox 360 are not available on the Xbox One yet. Some noticeable absences include the HBO GO app and the NBA Gametime app.

The Xbox One is $100 more expensive than the PS4 at $499, which experts have cited as one of the two main reasons that it has been outsold, the other being the later release date. The Xbox One will be competitive because it corners the market on two key customers: the Call of Duty gamer, who enjoys fast paced shooter and sporting games with friends, and the families who want an all in one entertainment system. The ease with which Xbox owners can multi-task makes it the easy choice for a living room console that will be shared with the whole family.