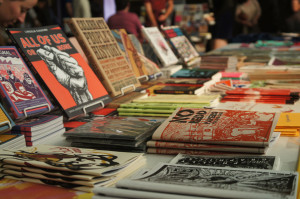 On a quiet Sunday in Highland Park, a community of eccentric quality gathered in a converted church to trade, sell and create at the Third Annual Pittsburgh Zine Fair.

Over 50 artists and writers came together under The Second Presbyterian Church’s arched ceiling – now known as The Union Project, a community space that holds events and concerts each month.

Zines are printed booklets that are self produced, published and distributed and range anywhere from three to 100 pages. Original drawings, comics collages, pressings or clippings that make up the zines are typically scanned and reproduced by photo copier or similar machine to keep production prices to a minimum. Content is completely up to the artist and can range from diary like entries or poems to political and social commentary.

Andy Scott, advertising director for the Pittsburgh Zine Fair describes the process of making a zine “anything printed by yourself, made by yourself and published by yourself,” but what comes after that is a completely different story. Zines have been used across cultures spanning from feminism, anarchist and punk rock scenes to convey messages and bring individuals together. 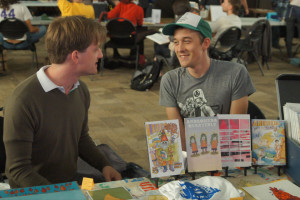 But it’s not so much about generating revenue, according to Scott.

“It’s a really cheap and effective way to get our art out there. [It’s] unregulated. There’s no publisher, no gallery, there’s no one telling you what to do so you can just do what you want,” Scott said.

Also, the creative mind behind Little Tired Press, an independent publisher that, recognizes the potential of the zine community in Pittsburgh and it’s neighborhoods and was inspired to create an anthology that spotlighted artists in the community.

“I came up with the idea of publishing a monthly comics anthology. It would give artists in the area the chance to publish their work on a regular basis throughout the months.”

Now in its fifth issue, Andromeda has moved to a quarterly publication that features the best of the zine community and gives local artists “something to get excited about.”

Erin Oh, Pittsburgh native and Fair Coordinator, was also influenced by the zine community and wished to expand it within Pittsburgh.

“I was really inspired, and really excited about the possibilities of creating a community around self publishing in Pittsburgh.” 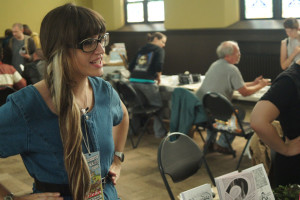 In 2011, the Carnegie Library of Pittsburgh held a Feminist Zine Symposium and Oh participated. Fueled by the experience, Oh along with a small group of others worked together in the hopes of growing the zine culture in Pittsburgh by holding the First Annual Pittsburgh Zine Fair in September of 2011.

This year, leather jackets rubbed elbows with tweed blazers while combat boots strolled by ballet flats as individual’s identity became lost in the sea of patron and artist Sunday afternoon. The Fair offered more than the opportunity to purchase and sell zines, the space became a platform where creative people could simply interact with others interested in getting out messages they believe in.

Identifying herself as Artnoose, San Francisco native, Pittsburgh based artist, has been creating zines for 17 years now and has seen first hand the evolution of the zine but here’s remain true to its roots.

“It’s about my life, and a lot of times what going on around me.”

With close to 1,500 sales on her etsy site, Artnoose still works with hand set type to create her zines that chronological personal experiences.

Shaun Slifer, 33 represented Just Seeds Artist Collective at the Fair. The collective is a decentralized cooperative that’s based all over the content, and focuses on creating work that “reflects a radical social, environmental, and political stance.” Slifer believes that zines are more than just creative outlets for people, it’s a form of self and community growth.

The Third Pittsburgh Zine Fair continues to grow as do the artists involved in the zine culture, hopefully making next year’s fair even bigger than before.

By Sean Armstrong | Staff Writer This past weekend, more than 35 zinesters from across the country converged on The Union Project in Pittsburgh for the sixth annual Zine Fair, with one purpose: Sell their […]