By: Marlee Ebbert | For The Duquesne Duke 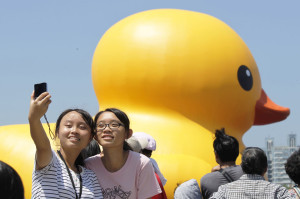 This giant floating bird has appeared in many cities across the globe such as Sydney, Belgium and Hong Kong in a movement called, The Rubber Duck Project

Each city gets its own duck but on Friday, September 27th, it will make its United States debut in Pittsburgh.

But, it’s not every day that a city decides to inflate a giant rubber duck on its rivers.

This event was planned just for the The Pittsburgh International Festival of Firsts. The festival includes contemporary art such as dance, theater, music, and visual arts from around the aworld and Pittsburgh is the first to see it.

When planning for the Festival of Firsts, Pittsburgh Cultural Trust vice president of programming Paul Organisak knew what the duck should be a part of it.
“I saw images of The Rubber Duck Project floating in Sydney harbor and I had one of those ‘aha’ moments that this is it… I could just imagine a massive rubber duck coming up the river to the Point,” Organisak said.

The massive rubber duck would not be here if it wasn’t for its artist, Florentjin Hofman. Hofman got the inspiration for the duck while at a museum.

“It was during a museum trip in Holland,” Hofman said, “seeing the Old Dutch landscapes and I imagined putting a contemporary object inside those paintings.”

Hofman saw an ad on television, where viewers could win a boat trip with a big rubber duck.

“I thought, ‘A big fat rubber duck! That’s the contemporary object I should use,’” Hofman thought.

So in 2001, using the world as Hofman’s canvas, The Rubber Duck project was born.

The forty foot duck was constructed in Ohio and the fourteen thousand pound pontoon it rests on was built in New Castle, Pa. according to Organisak.

He said one of the many reasons the forty foot duck was chosen as opposed to a different size was to allow it to pass under the Fort Duquesne and West End Bridge but not under Pittsburgh’s sister bridges.

With an attraction so big, security must be taken into account. Because the duck is a combination of water and electricity, Hofman says people cannot go inside the contraption. Organisak advises citizens to stand twenty feet away from the ring of yellow buoys around it and for extra precaution, the duck will be manned 24/7.

Though citizens cannot go inside of duck, Kevin McMahon, president and CEO of the Pittsburgh Cultural Trust still invites everyone to come and enjoy the big rubber duck for free.

The duck’s welcoming party will kickoff on the Roberto Clemente Bridge on Sixth Street at 5:30 p.m. As viewers wait, the duck will begin its voyage down the Ohio River from the West End Bridge, circle the Point, and head down the Allegheny River where it will be in full view at 6 p.m. From there it will remain on the river near Point State Park until October 20th.

The bigger questions here: what does the massive duck’s presence mean not only to Pittsburgh but to the other cities it resides.

“All the waters in the world become a global bathtub so we’re one family taking care of each other and this bathtub of the rubber duck,” Hofman said. “It joins people together. It connects and it makes people happy.”

October 3, 2013 The Duquesne Duke Features Comments Off on Fall Arts Preview: International, Firsts and VIA

By: Zach Brendza | Features Editor Carnegie International When: Oct. 5, 2013 through March 16, 2014 What: An internationally known, massive exhibit Where: Carnegie Museum of Art The “preeminent exhibition of new international art in […]