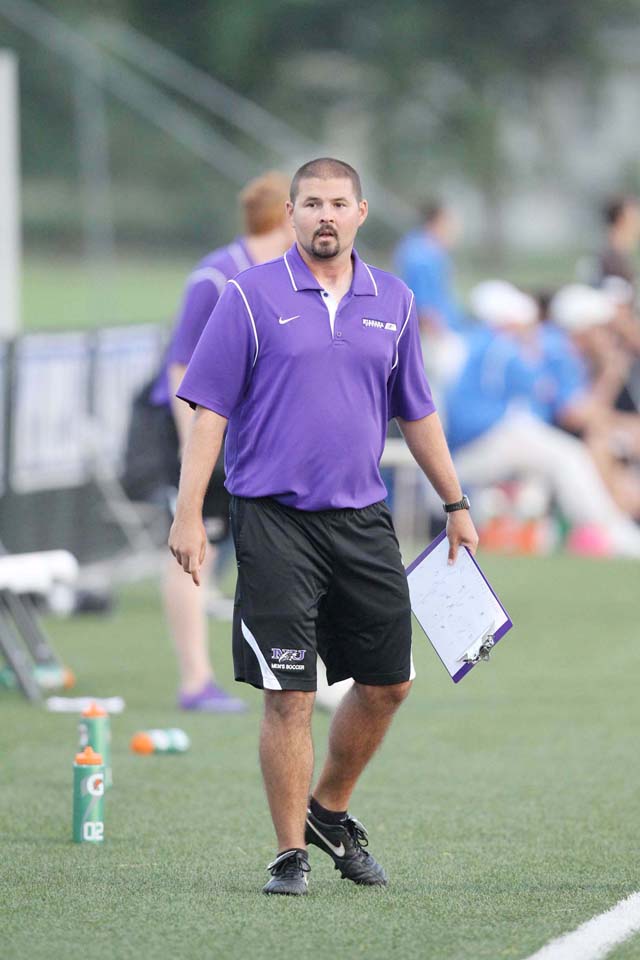 Former Niagara University soccer coach Chase Brooks was named the new Duquesne men’s soccer head coach on Wednesday, said Athletic Director Greg Amodio.
Brooks left his head position in Niagara after being named the 2012 NSCAA North Atlantic Coach of the Year with a career record of 22-6-9. Prior to his two years at Niagara, Brooks spent four seasons as the top assistant coach for Dayton’s program recruiting and developing players as the co-director of the University of Dayton Soccer Academy.
Brooks’ most recent accomplishment includes taking Niagara’s men’s soccer team to the school’s first NCAA tournament appearance in 2012.
Amodio said the University is eager to see how Brooks’ experience will lead the men’s soccer team forward.
“We are very excited about the hiring of Chase Brooks as our new men’s soccer coach,” said Amodio in a release following the hiring. “He has an impressive track record from his time as the top assistant at Dayton to his recent success as a head coach at Niagara. His familiarity with the Atlantic-10 Conference will be beneficial to the program.”
During Brooks’ tenure, the Flyers won the 2008 A-10 Tournament to capture their first championship in 10 years, earning their first berth in the NCAA Men’s Soccer Championship. Brooks helped build a recruiting class that ranked 20th in the nation in 2010 by College Soccer News. Among the recruits was U.S. U-17 Captain and All-American midfielder Marlon Duran, a nationally sought after recruit.
Senior Adam Clement, who was drafted to the Vancouver White Caps in the MLS Supplemental Draft last month, believes Brooks’ work ethic and skill will translate well for the program moving forward.
“I know this year when we played them [Niagara] they were a very fit team, they seemed to be very sound on the ball,” he said. “I’m sure during his practices, he’s gonna give more of a technical side to it and its gonna give a whole new look to it.”
In addition to his training methods, Clement believes knowing the way teams play in the A-10 is essential to success.

“It seems like the Atlantic 10 is more of a tough kind of game – the American side of soccer,” he said. “The fact that he has already been an assistant at Dayton is a fantastic thing for him and the program. He already has a taste for what its gonna be like.”
Junior forward Simon Gomez is equally as excited about the prowess and familiarity Brooks will bring to the program, especially during their in-conference battles.
“He has a pretty good résumé and definitely the A-10 experience gives him a lot of knowledge to prepare better for when we get to A-10s,”Gomez said. “All that experience is going to be very efficient and make us better.”
Brooks is more than confident that his time at Dayton as a recruiter and competitor will translate well within the conference.
“I do know what it takes to win a championship in this conference,” he said. “I am excited to bring this mentality of winning championships to Duquesne.”
As far as this year goes, he believes the team already has the talent to win.
“My expectations are to win and to work hard and to be just a good example of what a quality Division I team can represent,” Brooks said. “We’ll be a team hopefully that can be looked up to on campus.”
Brooks added that he will demand that players are making good decisions away from the field and getting involved within the community.
Brooks not only has experience as a coach, but also as a player. Brooks was captain of Eckerd College’s team his junior and senior seasons and made the First-Team All-Sunshine Conference team. He also received the James R. Harley Award, presented to the student-athlete who best represents Eckerd, following his senior season in 2003.
Brooks served as an assistant coach at Northern Illinois for two tears where he helped to lead the Huskies to a top-25 ranking and NCAA Tournament bid. The defenders and goalkeepers that he trained were ranked No. 1 in the country in shutouts and goals against average.
Brooks has high expectations for his new team. He is confident that the current team can improve and compete in the A-10.
“You’re always judged on what you do on the field and that’s winning championships,” Brooks said. “It’s not just something that’s going to be given to us, it’s something that you have to go and take. We will be capable and ready to win with the group we have this coming season.”

September 8, 2016 The Duquesne Duke News Comments Off on Campus bells repaired after malfunctioning

Brandon Addeo | News Editor  You might not have noticed it, but a familiar sound briefly disappeared from Duquesne’s campus. The campus’ carillon bell system, which rings the time from the chapel’s steeple every hour, […]

January 15, 2018 The Duquesne Duke News Comments Off on “No justice, no pizza.” Pressure increases on Pizza Milano after violent video.

Raymond Arke | News Editor UPDATE 08/22/18: According to multiple media reports, Mahmut Yilmaz was found not guilty of simple assault and aggravated assault on August 15. UPDATE 01/16/18: According to a Pizza Milano statement […]

Brandon Addeo and Hallie Lauer | The Duquesne Duke A longtime Duquesne law professor has been publicly recognized by Allegheny County for 33 years of service to Duquesne’s law school. Mark Yochum, who announced his […]