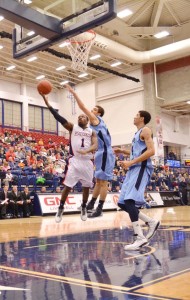 After a spectacular win over Temple last Thursday, the Duquesne men’s basketball team once again floundered at home against the Rhode Island Rams Saturday.

The second half then featured five lead changes before the Rams ended on a 6-2 run to win the game and claim their third A-10 victory before the Dukes could claim their second.

The Dukes made none of their free-throws in the first half and ultimately made six out of 14 the entire game, while the Rams sank 14 of 17 from the line. The Dukes were also out-rebounded 37-34.

Coach Jim Ferry rehashed that the Dukes need to be careful when they play because even the smallest errors can cost them the win.

“I thought that was a hard-fought game, I really thought that was a really ugly basketball game,” Ferry said. “To be honest, I thought both teams really tried hard, but in the end, we can’t leave that many free-throws on the line. I’ve said it before, our margin of error is really small.”

This is the Dukes’ 12th loss in 13 games, the majority of which they started out leading or trailing by a small margin and ultimately lost.

Senior forward Andre Marhold said that, although the Dukes have been on quite a losing streak, they still have faith in their game and their play.

Freshman guard Derrick Colter led the Dukes with 20 points and was named A-10 Rookie of the Week for the third time this season. Junior forward Jerry Jones and Marhold also scored in double digits for the Dukes with 11 and 10 points respectively. Marhold also recorded a career-high five blocks and had six rebounds.

Marhold said that this loss hit the Duke the hardest because it was a matchup where either team could have come out on top.

“This loss definitely is different just because everybody fought so hard just to win,” Marhold said. “Everybody in their mindset knew we were going to win this game. So that’s why it hurt, because we ended up coming short.”

The Dukes lost Tuesday night against Butler in Indianapolis. They next play the St. Bonaventure Bonnies this Saturday at the A.J. Palumbo Center where they will debut their new black uniforms in front of a blackout crowd.

By Adam Lindner | Asst. Sports Editor On Thursday evening in the Lexus Club at PPG Paints Arena, Keith Dambrot was formally introduced as the new head basketball coach of Duquesne University. The event, which was […]

Julian Routh | News Editor The course of an entire season can change in four seconds. Four seconds is all it took for Derrick Colter to run the length of the floor and sink a […]