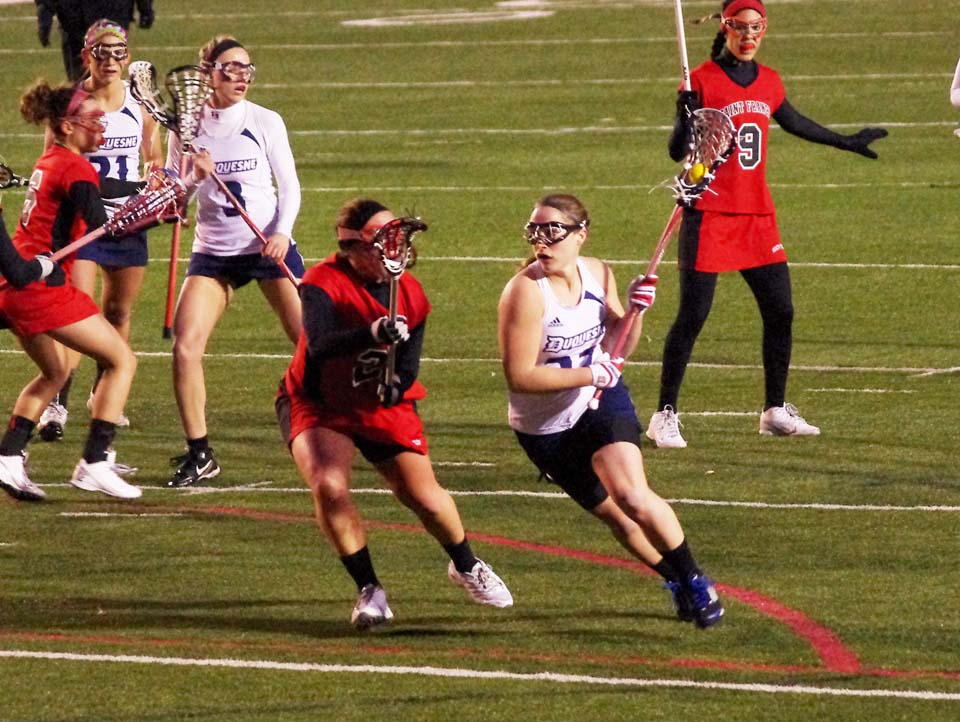 The Duquesne women’s lacrosse team started the season by asserting their dominance over the Saint Francis Red Flash on their way to a 20-6 victory Friday at Rooney Field.
The Dukes were in control from the opening whistle. Four minutes into the game, sophomore midfielder Clare Hurley was awarded a free position shot and netted the first goal. The Dukes scored again 12 seconds later when freshman attacker Lid Lowry received a sharp pass from sophomore midfielder Amanda Kidder and ripped it past the Red Flash goalie for her first career goal.
Kidder then went on a streak scoring three of the Dukes’ next six goals.
By halftime, the Dukes had a 12-2 lead over the Red Flash. The Dukes maintained their 10-goal lead through the second half. With just under 12 minutes remaining, sophomore midfielder Morgan Matz widened the lead to 11, which Saint Francis was never able to penetrate.
Head coach Michael Scerbo was happy to get the win, but said it was what he anticipated.
“It is always great to start out 1-0 at the beginning of the season,” he said. “It was what I expected. I figured we would be able to take 35 to 40 shots today and I was hoping we would be able to put 20 on the board today.”
The Dukes had 10 players score goals, which Scerbo said worked well for them.
“We’ve got a lot of fire-power on this team,” he said. “We have a lot of players who can score and the scoring was very spread out today. It was nice to see a lot of people get their hands on the ball and put it in the net.”
Of the Dukes’ 12 starters, eight are sophomores and junior. This means they have all played together for at least a year, but are still as Scerbo put it “young and exciting.” Scerbo said this creates an undeniable “chemistry.”
“The chemistry is wonderful because, of our leading scorers from last season, we have seven of eight coming back,” he said.
Hurley believes that this chemistry gives the Dukes an inherent advantage.
“It is nice that the personnel is basically the same,” she said. “We already have played with each other and we already have a chemistry. It is nice that starting out the season we already have all of that because that is usually a problem with a team.”
Hurley was a big catalyst for the Dukes. She had three goals including two on her four free position attempts and she also got two ground balls and one draw control.
Matz said she was impressed with her teammate’s tenacity.
“[Hurley] is strong,” Matz said. “You can see her body is all bruised up and scratched up. She takes hits. She goes after it. Luckily she gets fouled so she can make all the goals because she is really good at it.”
Hurley said that she understands it is all in a day’s work.
“It is worth it,” she explained. “I just go at it and if I get pushed down on my butt, it‘s fine. If I get the call then great, but if not it’s fine I am still going to keep going to the net hard.”
Scerbo said that the Dukes’ goal hasn’t changed.
“Our goal is, as it has been for the last couple years, to win an A-10 [Atlantic-10] Championship,” Scerbo said.
Hurley agreed.
“We can definitely win,” Hurley said. “So we better. We are. We are going to win.”
The Dukes head to Marquette Saturday and will return home for a Feb. 27 matchup against Penn State.

Prince is back on the Bluff to coach W. Lax

October 6, 2016 The Duquesne Duke Sports, Women's Lacrosse Comments Off on Prince is back on the Bluff to coach W. Lax

DU lacrosse rolls to win over SFU, improves to 3-0

February 28, 2019 The Duquesne Duke Sports, Women's Lacrosse Comments Off on DU lacrosse rolls to win over SFU, improves to 3-0

Drew White | Staff Writer Feb. 28, 2019 On Wednesday afternoon, Duquesne had the chance to open its season 3-0 for the first time since 1999, and it certainly didn’t squander the opportunity to do […]